In this week’s post, Stan Tekiela talks to us about pumpkins and the history behind this incredible edible.

It’s funny how we hang on to traditions—especially ancient ones. Take Halloween, for example. Started nearly 3,500 years ago by the Celtic people near Britain, it was a special day set aside to mark the end of the harvest and acknowledge the beginning of the long, dark, and cold season.

To celebrate, the leaders, called Druids, would order all fires in the village to be extinguished. A large sacrificial fire was built in the center of the village. People would arrive near sunset carrying large turnips hallowed out with grotesque faces carved into them—kind of like we do with pumpkins (jack-o’-lanterns). The evil-looking turnips, called neeps, were filled with tallow (animal fat), mounted on poles or sticks, and ignited in flames.

The flaming neeps were carried around to frighten away the evil spirits that come during the season of darkness. Villagers would dance and wave their neep lanterns around.

After the ceremony, each family would carry home their flaming neep to rekindle their own hearth fire. Great care was taken to keep this new fire and its protective glow from going out all winter.

Pumpkins are the oldest cultivated vegetable crop in North America. By the time any European explorers landed in this New World, native peoples had been growing pumpkins for nearly 11,000 years. 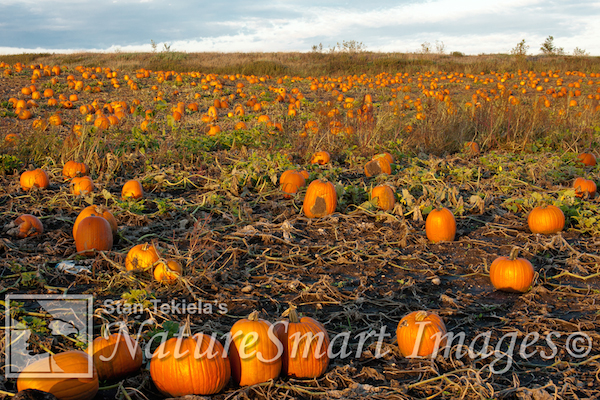 Native peoples are responsible for a wide variety of foods we still eat today. Some examples of these are the common bean, chili peppers, squash, amaranth, sweet potato, potato, bottle gourds, and, most importantly, corn. Unlike corn, pumpkins have changed very little since they were first grown in primitive gardens.

Pumpkins and their seeds were traded all across Central America and the American Southwest. By about 3,000-4,000 years ago, the use of pumpkins had made it to the plains and woodland Indians of central North America.

In the late 1700s, Yale students were calling New Englanders “pumpkin heads” because of their heavy diet of pumpkins. Before Boston was called bean town, it was called pumpkinshire. By 1845 the term pumpkin had come to mean stupid and thickheaded. Since then, the word has changed to “bumpkin.”

Pumpkins were a major source of food for the early European migrants to America. But, in 1893, a New York seed salesman Peter Henderson wrote, “The pumpkin is yet offered in large quantities for sale in our markets, but it ought to be banished from them as it has been for sometime from our garden.” By the mid-1900s pumpkins fell out of favor and haven’t been back except for pies and seeds.

This year, when you and your family are out picking your pumpkins to carve into jack-o’-lanterns, take a minute to consider the history behind this incredible edible vegetable.