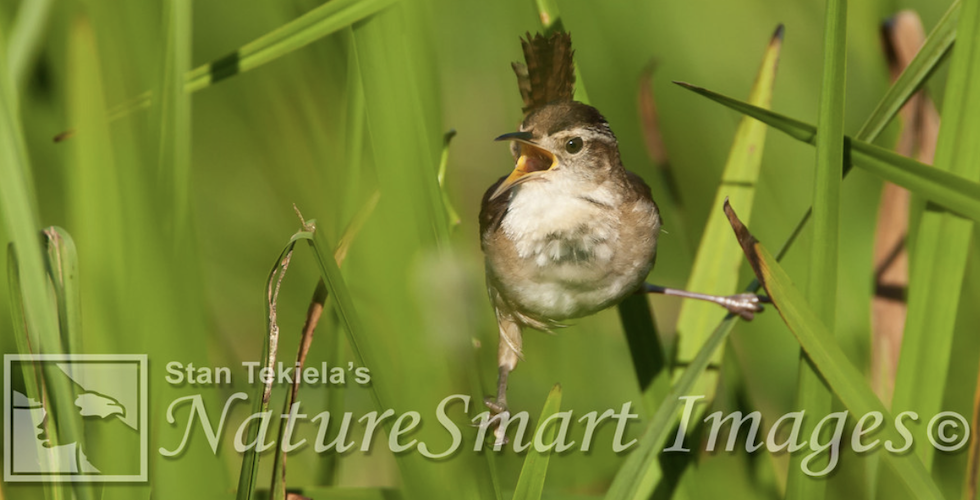 In today’s post, Stan Tekiela shares with us his observations of Marsh Wrens.

Every now and then I’m surprised at something in nature. I get a little thrill when I see something for the first time or learn something new. Recently I was out photographing Red-necked Grebes and their cute zebra-striped babies when I came across several very chatty Marsh Wrens (Cistothorus palustris) in a large cattail stand. 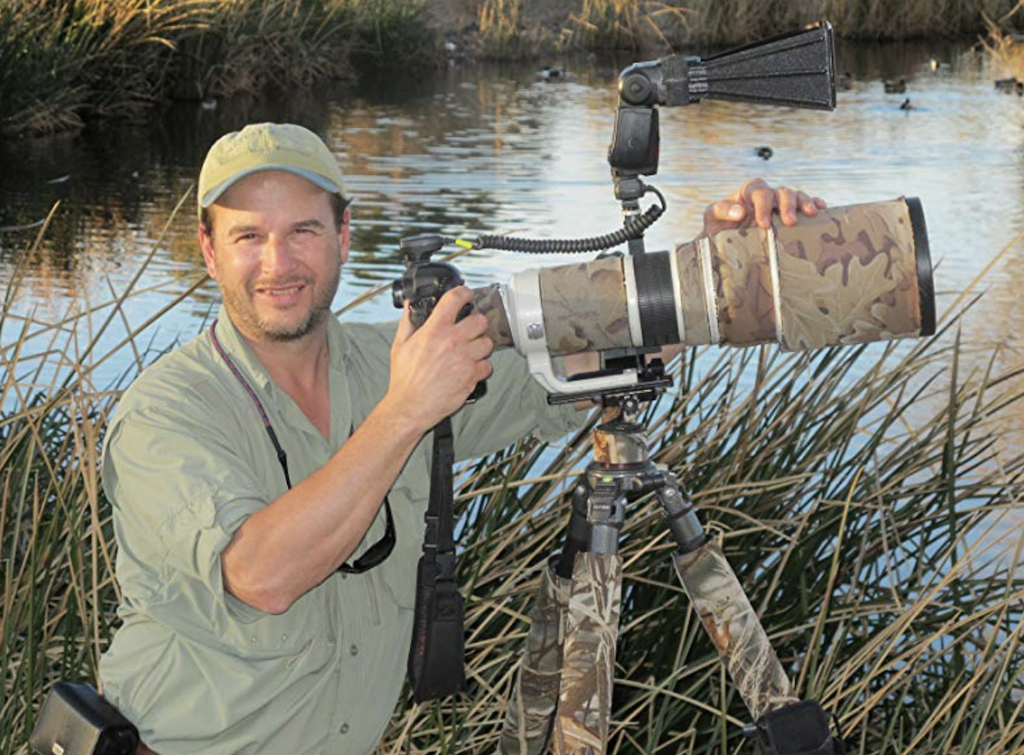 I’ve seen and photographed Marsh Wrens in the past, so this wasn’t new, but what I found interesting were the nests. The Marsh Wren is a small brown wren with darker wings and back, plus a dark cap on the head and a thin white line extending through the eye. They have a long, thin bill that’s slightly curved downward. They have a long tail, which is often cocked upward, pointing straight up or over the back.

The male claims a small territory (quarter acre) in a cattail stand and starts to build several nests, made from a tightly woven combination of dried and fresh cattail leaves. Each nest is also anchored at several points to dried cattail stems and new shoots. These are not simple cup nests, by the way. No, the Marsh Wren male constructs each nest with a full dome over the top and an entrance on the side. The nests are ball-shaped, about 12 inches tall, with surprisingly thick and sturdy walls, and they are well hidden inside the thick stand of cattails.

If that is not cool enough, the male builds five to six of these amazing nests within his territory. Each nest takes upwards of a week to complete. After constructing all of these marvelous nests, he starts to sing from the tops of the cattails to attract a female. The male sings a gurgling trill that sounds more like an insect than a bird. It is a very unique call that, once you hear it, you won’t forget. 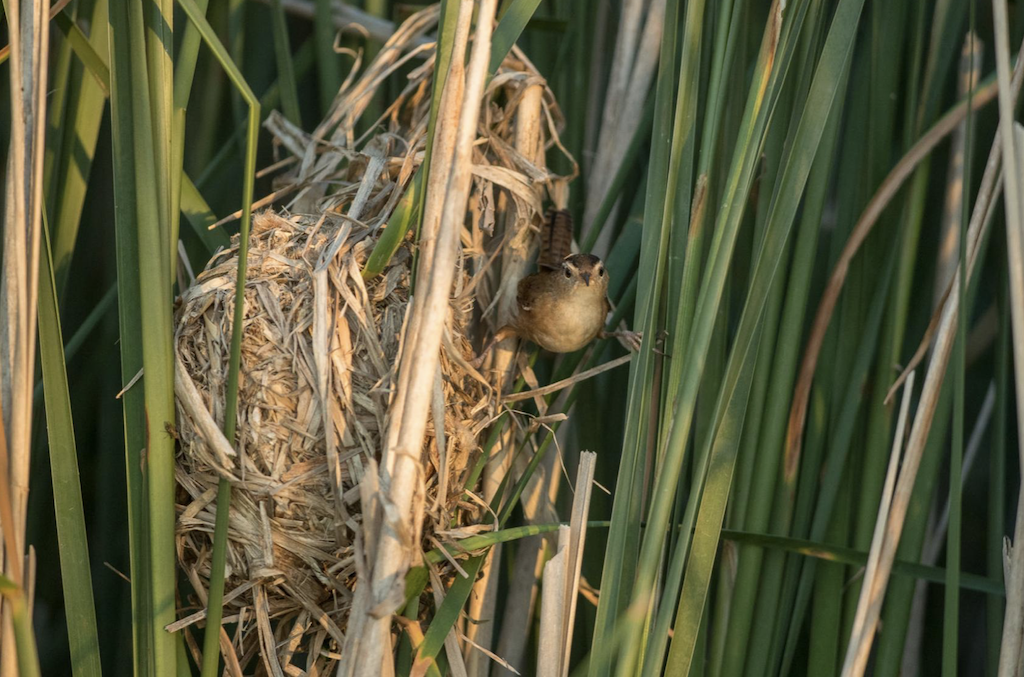 If he attracts a female, he will take her around to all of the different nests he has constructed. He will escort her to the entrance of each nest while she goes inside to inspect his construction skills. She will make the final decision on which nest she will use. Then she goes to work lining the interior of the nest cavity with soft, warm plant material.

Sometimes the female doesn’t like any of the male’s nests, so she will set out to build her own within his territory. Either way, once the female is settled into a nest and starts laying eggs, the male will continue singing his attractant song and try to persuade a second female to nest. The male may have upwards of three females in his territory using his domed nests all at the same time. 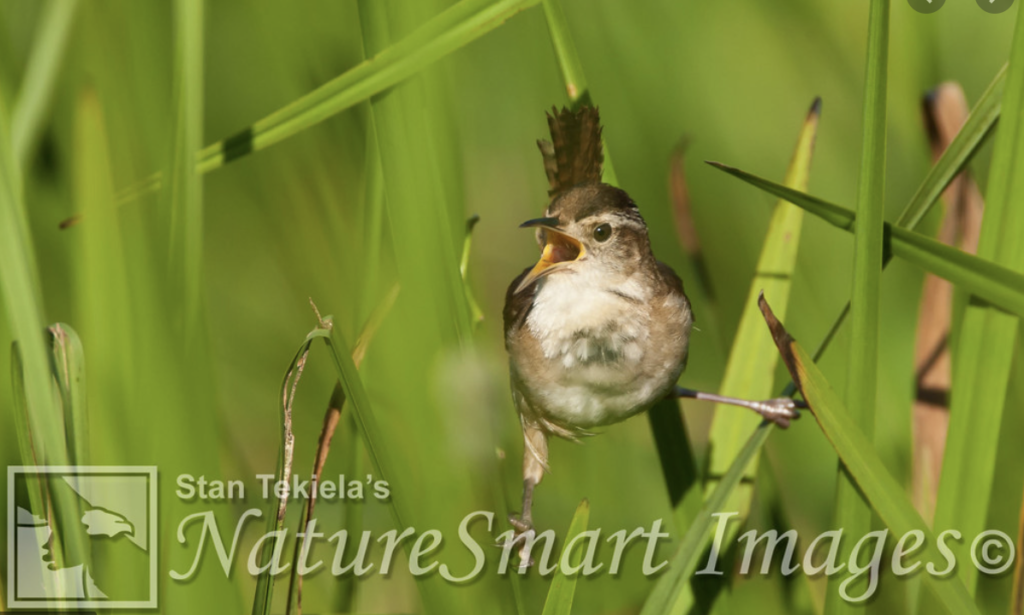 Before you start judging the male Marsh Wren and think that he is a no-good rotten scoundrel, recent studies show that only 30-40 percent of the female’s offspring in a territory are genetically related to the male that is holding the territory. After the female sets up her nest, she often goes outside of the male’s territory and solicits copulations from neighboring males before returning to her nest. It seems that both sexes are promiscuous.

When I recently found an active Marsh Wren nest, I set up to photograph the female feeding the babies. It was so exciting to see her hunting around the cattail stand, snatching up all sorts of insects. She would stuff her beak full of all sorts of insects and come rushing back to the nest. She would approach the nest from the side and straddle two cattail stems before slipping inside the nest cavity to feed her babies.

Marsh Wrens clean up their nest

When she emerged from the nest, most times she was carrying a fecal sac. Yes, you read that right. These white sacks that contain the babies’ feces are carried away by the female and deposited far from the nest. This keeps the interior of the nest clean and hides the nest location from predators.

I never get tired of photographing the loving and caring actions of Mother Nature, watching the female working nonstop to feed her babies inside one of the most amazing nest structures you will ever see.