The Virginia Opossum is One of the Coolest Critters

Stan shares with us his knowledge and fascination for the Virginia Opossum. Stan thinks it is one of the coolest critters ever. What do you think?

One of the coolest critters around is perhaps one of the least understood and, therefore, one of the least liked animals. To add insult to injury, some even say it’s ugly. Of course, I don’t agree. I think it’s amazing and beautiful. What critter am I talking about? It’s the Virginia Opossum (Didelphis virginiana).

The Virginia Opossum is North America’s only marsupial. So what the heck is a marsupial? The difference between marsupials and other mammals is how they reproduce. Female marsupials have two uteri and no placenta, unlike other mammal mothers that have one uterus and a corresponding placenta. Developing baby marsupials don’t attach to the mother’s uteri. 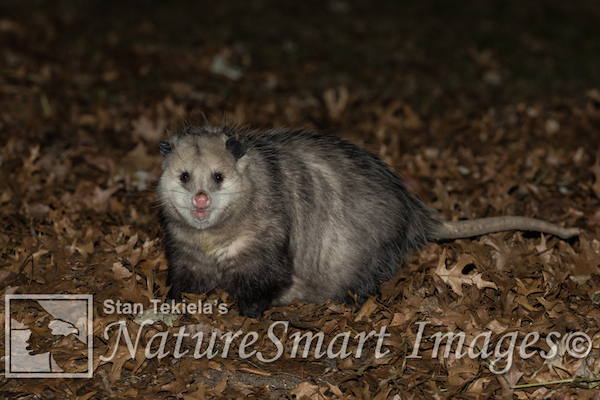 Virginia Opossum, taken in southern Minnesota in the wild

Young marsupials are born at less than 20 days in nearly an embryonic state. At birth, their eyes, ears, and hind legs are not yet developed. However, their front legs, mouth, and nose are well developed. Even though they lack basic body parts, they crawl and wiggle through their mother’s fur, arriving at a fur-lined pouch located on the mother’s belly where they will attach to a mammary gland to drink milk. Depending upon the species of marsupial, the babies can be as small as a lima bean at this stage. 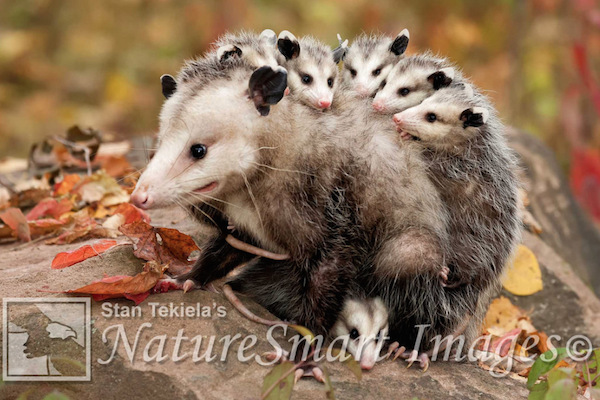 The opossum is found throughout the eastern half of the country and down into Mexico and Central America. In recent decades, the opossum has been expanding its range northward into the Great Plains States. Interestingly, there is a sizable population of opossum along the west coast from California to the Canadian border. It is believed they were introduced into this area during the Great Depression, most likely as a source of food for people, and some escaped and are now well established in the wild.

Surprisingly, opossum vary in size and color. Some older male opossum can be upwards of 3 feet long (without the tail) and weight up to 15 pounds. Females are smaller and weigh under 9 pounds. They also come in a wide variety of colors from nearly all white to nearly all black. They have large fleshy ears that range in color from all black to all white or a combination of both. Tails can be anywhere from 9 to 20 inches long and are naked. Many say that the tails are prehensile, claiming that the opossum can hang by its tail or even carry objects with it. I don’t believe this to be true. Their tails are not strong enough to grasp anything, but they do use their tail to help with balance and support while climbing around on tree branches. 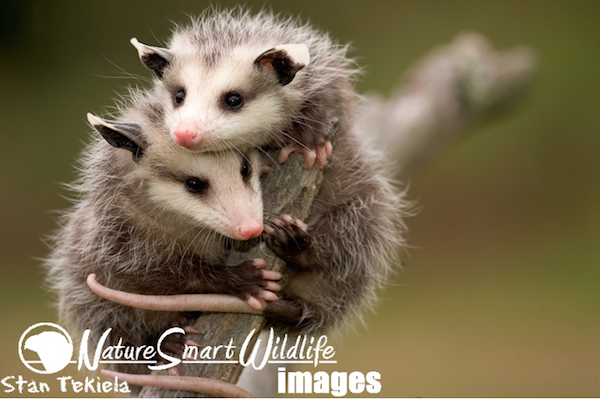 Another unique feature of the opossum is that they have 50 teeth, which is more than any other mammal in North America. When frightened, they will open their mouth and show off their teeth in an attempt to scare away any threat. If this doesn’t work, they will fall over and play dead (or “play possum”). Their mouth will open, letting the tongue hang out. When the threat passes, they will get up and waddle off.

They are solitary animals that come out at night, although you can occasionally see one during the day. I am so interested in opossums that recently I have been spending many hours sitting outside in the cold and dark, waiting to capture some images of this critter. Hour after hour, I wait, huddled in a small photo blind. Occasionally, I’ve been lucky enough to capture a few images of these marvelous creatures.