The Mystery of Bird Migration

All around us, nature is full of wonder and mystery, and migration illustrates this well. It’s an amazing natural occurrence that seems simple enough. Birds leave the northern regions in the fall, before the onset of winter. They spend the coldest months farther south, and then return in the spring. But while this may sound easy, it’s not the whole story. Migration is one of the most difficult and dangerous things that birds do.

Migration is basic and yet extremely complex. Avian biologists and naturalists have learned a lot about it, but, even with our advanced technology, there are still many aspects that are not fully understood. For example, how does a young bird that just recently hatched know when it’s time to migrate? How does it know where to go? How does it find its way, and how does it know it’s in the right place when it arrives? These are just some of the questions that have baffled researchers for centuries.

The ability to migrate is even more mind-boggling when you think about what humans need to do to navigate a long trip. Imagine if you had to navigate to a destination near the tropics, but you had no access to weather reports, GPS, or even such basic amenities as a highway system or a car. How well do you think you’d do? Let’s face it, you wouldn’t make it. On the other hand, birds have excellent built-in systems to help them prepare for migration and navigation during their trips.

People have held strange ideas about where birds go and what they do during winter. Long ago, many believed the notion that some birds buried themselves in mud at the bottom of ponds and lakes for the winter, and then returned to the surface in the spring. Of course, we know today that this is biologically and physically impossible.

People also thought that Ruby-throated Hummingbirds could not fly far away to escape winter, so they hitched rides on the backs of larger migrators, such as Canada Geese. Today, we know that Ruby-throats migrate to the tropics of Central America, crossing over the Gulf of Mexico in a rigorous, 25-hour nonstop flight of more than 600 miles. For the most part, Canada Geese don’t migrate that far, flying less than 500 miles in total for their migration. 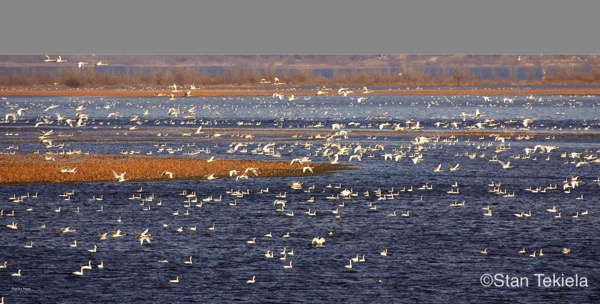 Even now, some folks mistakenly think that after birds mate and raise babies in the north, they migrate south and mate again, but this is not true for any bird species. When birds fly south for the winter, they just rest. They won’t nest until they return to their breeding habitats in such places as our parks and backyards.

Lots of birds, such as warblers and orioles, migrate great distances. Others go only as far as needed to survive the winter. And, of course, some birds don’t migrate at all. Blackcapped Chickadees, White-breasted Nuthatches, and Northern Cardinals stay put all year and endure the entire winter, no matter how harsh it becomes.

Here are some of Stan’s other amazing nature books for your consideration: Majestic Eagles; The Lives of Wolves, Coyotes, and Foxes; or Backyard Birds: Welcomed Guests at our Gardens and Feeders. Young readers will delight in his award-winning children’s books, such as Whose Butt?, Critter Litter, and Jump, Little Wood Ducks.