The Oystercatcher Sleeps with One Eye Open

Stan Tekiela shares with us his observation of the Oystercatcher. Did you know that all birds actually sleep with one eye open?

Slowing wading through a clear tidal pool, about knee deep, in coastal Florida, I was trying to move slow enough not to disturb a gorgeous American Oystercatcher that was napping on a small sandbar in the middle of the lagoon. The Oystercatcher is an amazing looking shorebird with a black hood punctuated by a bright yellow eye surrounded by a striking orange ring. Matching the crazy looking eye is a very long, thick, orange-to-red bill that the bird uses for probing into the sand for aquatic insects.

It has long, sturdy legs; when resting, it has the habit of tucking one leg up into its belly feathers and slipping its long bill under a wing to conserve warmth. This is a standard resting position for many shorebirds.

I slowly moved across the shallow lagoon, careful to watch for alligators and water snakes. Each advancing step had to be tested to make sure the water was not too deep, the ground not too slippery, and that I was not stepping on any hidden aquatic critter. In addition, when carrying 30K worth of camera gear, the last thing you want to do is slip and drop it in salt water. That would be a major disaster.

I had the sun at my back and the lighting was perfect. It was just an hour or so before sunset, the harsh light of midday had passed, and now the shadows were nice and long, making the light soft and warm. The air temperature was in the high 70s and there was no wind. The conditions were perfect for this kind of photography work. 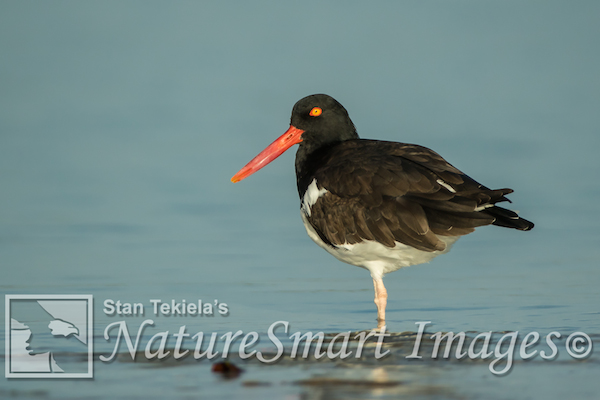 As I approached, I could see the oystercatcher had his long orange bill tucked under his wing and he was sleeping. This got me thinking about shorebirds in general. Studies show that when shorebirds are resting they often gather in small flocks. They collect close together, often standing on one leg, which helps them conserve heat.

Birds have the ability “sleep” with one eye closed and one open. It is called unihemispheric, slow-wave sleep (USWS) and allows the birds to see approaching danger/predators while still being able to rest/sleep. If the right eye of the bird is closed, then the left side of the brain rests. And if the left eye is closed, then the right side of the brain gets a well-deserved break.

This ability to control sleep and wakefulness simultaneously is unique to birds but has also been observed in seals, manatees, and dolphins. This allows these aquatic mammals to sleep underwater and still be able to rise to the surface to breathe without having to fully wake up every few minutes.

When I was approaching the American Oystercatcher, who was all by himself, he quickly saw me coming with his one open eye. He untucked his bill from under his wing to watch me, but he was so comfortable with me that he never put down the leg that he had tucked into his belly feathers. Obviously I wasn’t a threat to him and he remained comfortable, allowing me to capture a few images before I turned and headed back to the other side of the lagoon. While walking back through the water, I thought about the amazing adaptions that wildlife employs in everyday life. These are the aspects of nature that are the least understood but are the things that fascinate me.

It wasn’t until recently that USWS was first observed and studied. This kind of behavior was once thought to be impossible, but, of course, nature has been doing it for millions of years. We just hadn’t noticed it and certainly didn’t understand it. Perhaps this is another wake-up call (pun intended) for us to learn from Mother Nature.