Things that Bite: About Spiders

Tom Anderson, author of Things that Bite: The Truth About Critters that Scare People shares with us truth and myth about spiders. 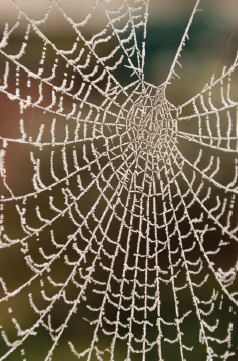 In E. B. White’s classic tale Charlotte’s Web, we are introduced to a sweet spider heroine, Charlotte. Even her charming manner and good web penmanship could not lift spiders out of their reputation of permanent Halloween status. Humans have maligned these amazing architects for eons. Take a close look at a spider and it will mesmerize you with the engineering of its beautiful webs, its patience, stealth, and sheer beauty. Who could resist the loving stare of eight eyes?

There are currently more than 35,000 known species of spiders with thousands of additional species waiting to be classified. The U.S. is home to roughly 3,500 spider species, and approximately 1,000 reside in the Great Lakes region.

Spiders, like insects, are invertebrates (without a backbone). Unlike insects, they have eight legs and two primary body parts: the cephalothorax (front body section) and the larger abdomen. Like their tick, mite, and scorpion cousins, spiders are arachnids. All species of spiders create silk, and all are hunters. They either actively hunt or they hunt from a web.

There are many functions of spider silk. It is used in building webs and egg cases, for wrapping up prey, and as a material for creating retreat shelters. Male spiders are smaller than females, and a male can often be recognized by his unique pair of pedipalps or “palps.” The palps resemble a pair of legs or “feelers.” They are located directly in front of the pair of legs closest to the spider’s face. The tips of the male’s palps are swollen, resembling a pair of boxing gloves. These serve as sperm receptacles for mating.

In some species, the male locates the female through the use of pheromones. These are chemicals produced in their bodies to affect the behavior or physiology of others of their species. Among some species, males recognize the silk draglines of a female.

After a cautious courtship, mating will occur. If the male’s timing is off, the female might eat him! Among most species, females generally lay their eggs in the summer, a week or so after mating. The eggs hatch at the same time. Some believe that the hundreds of young are born blind. After a few days at the egg, they can see and move. For several days they live off an internal egg yolk. As they mature, they learn that their brothers and sisters are quite tasty. Cannibalism is not uncommon among young spiders. At each stage of growth, spiders shed or molt their skin. Once they reach adulthood, they no longer molt.

Spider silk is the strongest of all natural fibers. It compares favorably with steel and is twice as strong as Kevlar of the same weight. Baby spiders (spiderlings) often disperse by jumping from an elevated position, emitting strands of silk and letting the wind carry them away. Some adult spiders will also disperse by catching a ride on the wind. This method of moving is referred to as “ballooning.” Ballooning is most commonly observed in autumn.

When spiders are found in good numbers, sometimes thousands or millions per acre, they can help control insects that cause damage to agricultural crops. Some cultures, like the Piaroa Indians in South America, actually eat large spiders and consider them a delicacy. Spider venom has been used in designing new drugs for health care.

MYTH: A spider bit me last night while I was asleep. It couldn’t have been anything else. This is a widespread superstition. It is highly unusual for a spider to come into your bed. (Unless you sleep on the basement or garage floor!) In the unlikely event that a spider gets into your bed, it will not seek you out to bite you. If you happen to roll onto one, it might bite, but it’s not likely. According to some emergency room personnel, unexplained swelling or skin irritation is often blamed on a “spider bite.” Nevertheless, when the patient is asked if he actually saw a spider, he almost always say no. Research has shown that more than 80% of suspected “spider bites” are caused by other insects, ticks, or by medical conditions.

The primary reason a spider bites is to kill its prey, and almost all species of spiders are venomous. The venom helps them quickly kill or paralyze their prey. When a spider bites a human, it is not interested in wrapping you in silk, it is strictly a defensive act. Around humans, spiders are generally very timid and will skitter away quickly if they are disturbed.

Actually, spiders don’t bite, they inject. The spider’s mouth is located directly below its eyes. Their large jaws are called chelicerae; these vertical structures are often lined with small teeth and tipped with fangs. In most spiders, the jaws swing inward from the sides to grasp prey. In some larger spider species, the jaws swing downwards to more easily pin down prey.

The spider’s venom is secreted through two fangs into its prey, but spiders less than about 5⁄16 of an inch cannot bite you, as they are too small. Pretty much all spiders larger than 5⁄16 of an inch can bite humans, but most usually won’t. Even those that can break your skin will sometimes inject harmless venom, and some will not inject venom at all. Most spider bites are less painful than a bee sting, but some people are more sensitive to spider bites than others.

How Afraid Should I Be?

In the Great Lakes region, the majority of species of spiders are harmless. Having said that, there are very rare cases where people might be sensitive to a bite. Larry Weber, author of Spiders of the North Woods, told me that in over 30 years of collecting and studying spiders, only two spiders have broken his skin with their bites and both resulted in only a temporary itch. (And one of those was in South Carolina!)

The only two species that are cause for concern in this region are the brown recluse spider and the black widow spider. Neither of these species is common to this region, as they prefer more southerly latitudes. The brown recluse spider is colored tan to dark brown and is approximately 1⁄2 inch long. It bears a distinctive dark violin-shaped marking on top of the front body section (cephalothorax). Its bite is usually painless, but a burning sensation is commonly experienced in the first hour. After several hours, a blister forms and the surrounding skin begins to darken and swell. The venom of the brown recluse might cause extensive tissue damage. It normally takes up to two months for such a bite to heal.

The black widow is a very shy species. The female delivers a serious, but rarely lethal, bite. (The male is too small to bite humans.) The female has a round, shiny black abdomen with a red, hourglass-shaped marking on the underside of her belly. Her bite might feel like a pinprick. The bite site might swell lightly and bear faint red marks. Within a few hours, the pain intensifies and stiffness begins. Other symptoms of the neurotoxic venom include chills, fever, nausea, and severe abdominal pain. Keep in mind, confirmed bites from black widow and brown recluse spiders are extremely rare in the Great Lakes region.

Clean and wash the bite site with soap and hot water. Apply ice and elevate the affected area. To guard against infection, apply an antiseptic lotion or cream. Most bites improve within a few hours to three days. Seek medical attention if symptoms persist or worsen. This is especially important with children. In the highly unlikely event that a brown recluse or black widow bites you, capture the spider for positive identification and seek immediate medical attention.

Spiders are timid around people and skitter away if disturbed. If one does bite you, it is strictly in self-defense. In the Great Lakes region, nearly all spider bites are harmless to humans and less painful than a bee sting.