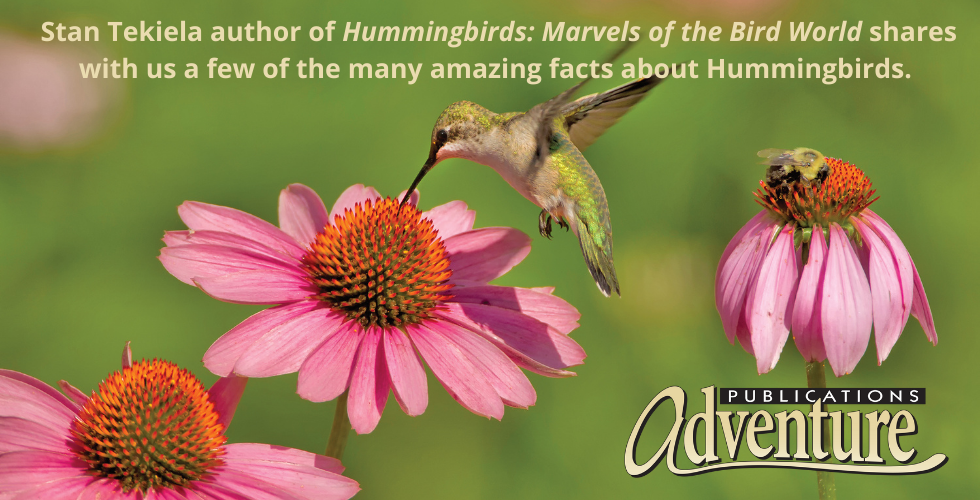 Did You Know that Hummers Can Even Fly Backwards?

Hummingbirds are New World birds found only in North, Central, and South America. These tiny flying jewels were unknown to Europeans until settlement, and the wide variety of hummers must have mystified the early ornithologists. Even today, it’s not clear why there are so many different species of hummingbirds. But did you know that hummers can even fly backwards? Stan Tekiela, author of Hummingbirds: Marvels of the Bird World, shares with us a few of the many amazing facts about hummingbirds.

Tropical hummingbirds are members of the Trochilinae subfamily. The majority of all hummingbirds, including all species in the United States and Canada, belong to this subfamily. With their wide variety of sizes and colors; long or short bills; and conspicuous, colorful males, they appear more like what we consider to be typical hummingbirds.

North American hummingbirds are some of the most easily recognized birds and are characterized by many unique features. These petite treasures are well known for their specialized, brightly colored, sparkly feathers, which refract sunlight almost like a prism. Unlike most other birds, hummers enjoy a distinctive diet of nectar liberally seasoned with minute insects. For sipping their sweet drinks, they sport a long, narrow bill that slips easily into flowers and nectar feeders.

They are very fast, agile flyers and the only birds that truly hover in flight. Many birds can remain stationary, or hover, for a few wing beats if they have a good headwind, but they cannot sustain their hover like a hummingbird. Incredibly, hummers can also fly backward! They are the only birds that can also fly straight up and down, side to side, and even flip around in an aerial somersault. The key to all of this fantastic flight is their size and weight.

Few birds are as well named as the hummingbird. Just listen for the humming sound you’ll hear as they fly by and you will understand the reason for the distinctive name. The sound, however, is not made with the vocal chords. It’s actually created by the wings, which flap incredibly fast. Hummer wings move so much air so quickly that audible reverberation is produced.

A Ruby-throated Hummingbird flaps its wings 70–80 times per second during regular flight. The extraordinary speed of the wing beats makes it difficult to photograph a hummer in flight, freezing it in time. This image shows flight movement captured in less than a hundred-thousandth of a second. During specialized courtship flights, a Ruby-throat will flap up to a tremendous 200 times per second! Try doing anything 200 times in less than 60 seconds and you’ll agree that these birds are beyond amazing.

All hummer species are extremely small. In fact, the smallest bird in the world is a hummingbird. The mini Bee Hummingbird, which occurs in Cuba, is only 2 inches long and weighs 1.8 grams—about 6⁄100 ounce. The smallest hummer in the United States is the Calliope Hummingbird. It weighs just 2.5 grams, which is still minuscule at under 1⁄10 ounce. The Calliope is noticeably smaller than the other hummingbirds and also has a very short bill. The weight range of a Ruby-throated Hummingbird is slightly more at 2.7–3 grams, making it about the weight of a U.S. penny!

If you enjoyed this post, sign up for our newsletter here, and order your copy of Hummingbirds: Marvels of the Bird World now.