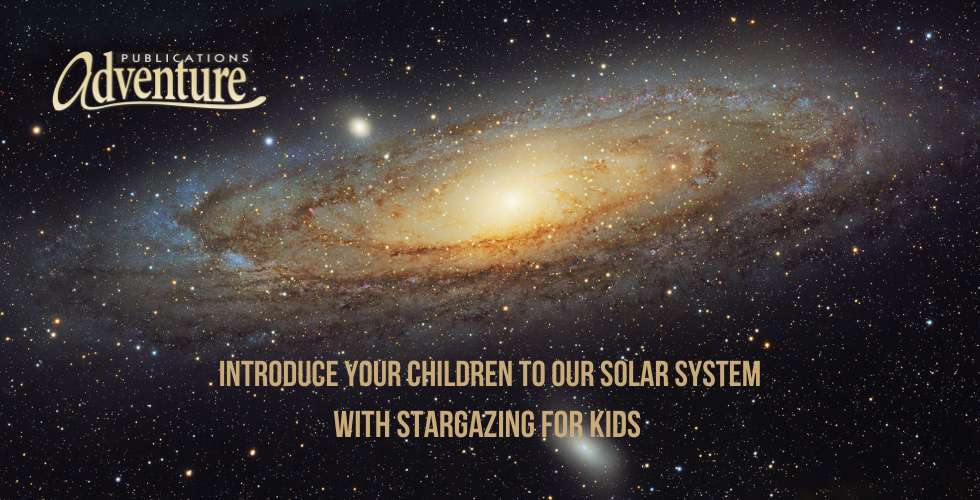 Discovering Our Solar System, One Planet at a Time

Our solar system consists of the sun and all the objects bound to it by gravity. Only the sun shines with its own light. Other objects in our solar system reflect the light of our sun. Because they are so close to Earth, many appear bright in our sky. In his book Stargazing for Kids: An Introduction to Astronomy, Jonathan Poppele helps kids discover our solar system, one planet at a time.

The sun is our closest star, and it’s the best-studied star in the universe. As stars go, it is extremely close—just 93 million miles from Earth. That’s about 8 light minutes. The next closest star to Earth is 4.4 light-years, or about 280,000 times as far.

What Can I See?
Don’t look directly at the sun without protective equipment. Always project its image or use a specially designed solar filter. The Stanford Solar Center (solar-center.stanford.edu/observe) has a great web page about safe ways to observe the sun with simple equipment.

The moon is the brightest object in the night sky, our closest celestial neighbor, and the only natural object in orbit around the Earth. The full moon is about 30,000 times brighter than the brightest stars. The moon is much smaller than the sun, but it’s also much closer to the Earth. By chance, the two appear the same size in our sky—roughly the size of your pinkie nail at arm’s length.

Phases
The moon’s most prominent feature is its sequence of phases. Half of the moon’s surface is always lit, but as the moon orbits the Earth we see different amounts of this lit surface. When the moon is between the Earth and the sun, the side facing us is dark, making the moon invisible. This is called a “New Moon.” As the moon orbits the Earth, we begin to see it as a slender crescent in the evening sky, growing larger, or “waxing,” each night. When the moon is a quarter of the way around the Earth, we see half of its disk illuminated. This “First Quarter” moon is visible in the evening sky and sets about midnight.

The moon continues to wax for another week, becoming more round, or “gibbous,” each night. When the moon is on the opposite side of the Earth from the sun, we see it completely lit. The “Full Moon” is up all night, rising around sunset and setting close to sunrise. As the moon enters the second half of its orbit, it “wanes,” showing less of its lit surface each night. It rises about an hour later each evening, giving us a period of moonless sky after sunset. The waning gibbous moon gives way to the “Third Quarter,” followed by a waning crescent before disappearing from the sky on the next New Moon.

What Can I See?
With your naked eye, you can easily observe the moon’s changing phases, see large maria, and spot a few of the most prominent craters. Binoculars will reveal many more features. When using binoculars or a telescope, look near the “terminator,” the line that marks the edge of sunlight. Here, the long shadows make lunar features easier to see.

Mercury is named for the Roman messenger of the gods, renowned for his swiftness. Mercury is the smallest planet in our solar system and the closest planet to the sun. It has a rocky surface, a metal core, and no atmosphere. Mercury’s orbit and rotation are locked together in a curious way. If you were standing on the surface, Mercury would make one complete orbit around the sun between sunset and sunrise. A night on Mercury lasts an entire year!

What Can I See?
Spotting Mercury is a rewarding challenge. Though bright, Mercury is always close to the sun and low in the sky during twilight, making it tricky to see. Binoculars help. Use an astronomy app or search online for the best times and places to look. Like the Moon, Mercury exhibits phases, which you can see with a good telescope.

Venus is named for the Roman goddess of love and beauty. The planet is a dazzling namesake, shining brighter than anything else in the sky besides the sun and the moon. Venus has think clouds of carbon dioxide that trap heat from the sun. Its surface is hot enough to melt lead. But 30 miles up, above the clouds, the temperature is similar to Earth. Some scientists think humans could colonize Venus by building floating cloud cities.

What Can I See?
Venus is hard to miss when it’s high in the sky. Only the sun and moon shine brighter. As Venus orbits the sun, it cycles between our evening and morning skies. A complete cycle takes just over a year and a half. Venus shows phases, just like the moon. The phases are easy to see in a small telescope and may be visible to a sharp-eyed observer with binoculars.

Mars gets its name from the Roman god of war, perhaps because of its red color. The color comes from iron oxide, or rust, on the surface. Mars is smaller then Earth and has a thin atmosphere and low gravity. Even so, some scientists and explorers would like to send people to Mars someday.

What Can I See?
Mars’s distinctive red color makes it easy to identify. Most of the time, Mars is far from Earth and is dimmer than many stars, so you need to know where to look. Once every two years, Mars passes close to Earth and can shine brighter than any star. Known as oppositions, these are the best times to view the red planet. Binoculars show a tiny disk. A telescope can show details on the surface, including polar ice caps.

Jupiter is named for the king of the Roman gods. Jupiter is the largest planet and has more than twice the mass of all the other planets combined. Jupiter is made mostly of hydrogen and helium. It has a thick, turbulent atmosphere with colorful bands of clouds and powerful storms. Jupiter’s Great Red Spot is a hurricane twice the size of the Earth that has been raging for more than 350 years.

What Can I See?
Jupiter is striking in the sky, shining brighter than any star. Binoculars can show Jupiter’s four brightest moons: Io, Europa, Ganymede, and Callisto. The moons orbit quickly, offering a different view every night. A small telescope will show Jupiter’s colorful cloud bands and the Great Red Spot.

Saturn is named after the father of Jupiter in Roman mythology. It is nearly as large as Jupiter, but much farther away. Although large, Saturn has the lowest density of any planet. If you could build a bathtub large enough, Saturn would float. Saturn is most famous for its striking system of rings.

What Can I See?
Saturn shines about as bright as the brightest stars in the sky. It has a distinctive yellowish color that makes it easy to pick out along the zodiac. Saturn is one of the most beautiful sights to view in a small telescope. A telescope of almost any size will show the planet’s famous rings. Larger telescopes will show increasing detail and color.

Uranus is named for the Greek god of the sky. Unknown to ancient cultures, it was the first planet discovered during recorded history. Uranus is the third-largest planet. It is about twice as far from the sun as Saturn. Uranus has a distinctive bluish-green color that comes from methane gas in its thick atmosphere.

What Can I See?
Uranus is easy to see with binoculars. Under good, dark skies, it is even visible to the naked eye. But you need a good up-to-date star chart to know exactly where to look. In a telescope, Uranus appears faintly bluish-green. Above about 100x magnification, it looks like a tiny disk—which is how it was first discovered.

Neptune is named for the Roman god of the sea. It has a bluish color, similar to Uranus, also caused by methane in its atmosphere. Neptune is the most distant planet from the sun—at least the most distant we know of. Neptune takes 165 years to orbit the sun. Only one “year” has passed on Neptune since it was first discovered. Neptune is also the windiest planet, with wind speeds up to 1,240 mph.

What Can I See?
Neptune is the only known planet that is too dim to see with the naked eye. In a small telescope, Neptune looks like a small, bluish point of light. It is no brighter than most of the surrounding stars, so you need a detailed star chart to pick it out. Neptune is difficult to spot with binoculars.

About the author: Jonathan Poppele is a naturalist, author, and educator who works to help people connect more deeply with themselves, others, and the natural world. He earned a master’s degree in Conservation Biology from the University of Minnesota and taught at the U of M for many years before leaving to focus on his own projects.

An avid outdoorsman and student of natural history, Jon is the founder and director of the Minnesota Wildlife Tracking Project. Jon is also Head Instructor of the Center for Mind-Body Oneness in Saint Paul, Minnesota, where he teaches meditation, mindfulness, and the peaceful martial art of Ki-Aikido.

If you enjoyed this post, sign up for our newsletter here! Help your child discover the solar system and order a copy of Stargazing for Kids: An Introduction to Astronomy