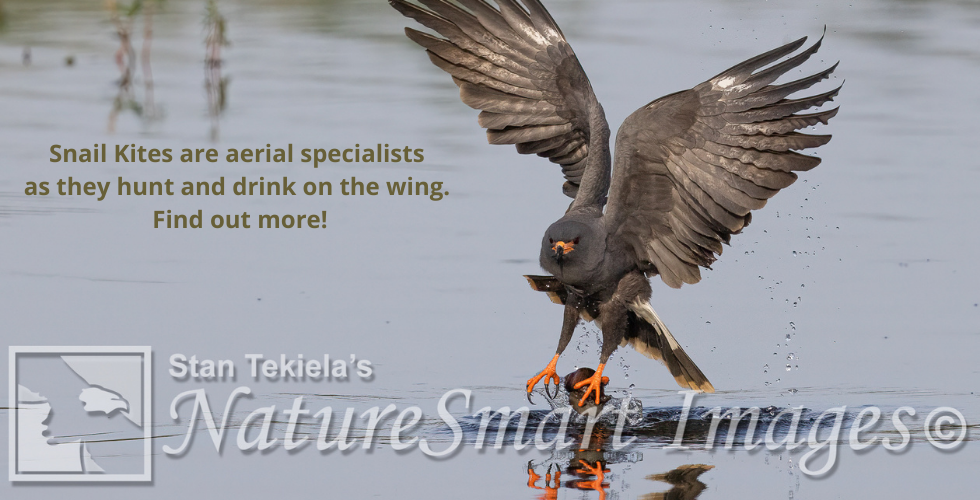 Snail Kites: Aerial Specialists That Hunt and Drink on the Wing

It seems like there are as many different strategies employed for a bird’s survival as there are species of birds. Think about all the different things a bird must do just to survive. These include a wide range of nesting and feeding strategies. This fact was glaringly obvious when Stan Tekiela photographed the Federally Endangered Snail Kite (Rostrhamus sociabillis) in southwest Florida. He describes to us how these birds hunt and drink in the air.

I was in Florida to lead a bird photo tour and give a few presentations for Ding Darling National Wildlife Refuge. Each morning I would get up early and head out to get into place to photograph a small colony of Snail Kites right at sunrise. The warm and moist mornings were such a nice change from the cold and windy mornings back in my northern home.

Kites are a group of raptors that are considered aerial specialists, hunting and drinking on the wing. The have a unique buoyant flight that makes them easy to spot from a distance. We have five kite species in the US. All of these kites are found in the southern states, except for the White-tailed Kite, which is found along the west coast.

Most of the kites are considered food specialists, which means they only eat a specific type of food. For the Snail Kites, their main diet is snails. Apple Snails, which are large mollusks found in fresh water in warm climates, make up the majority of their diet. These snails are huge and can grow upwards of 3 inches across.

It is estimated that there are only 400 breeding pairs, or about 1,000 individual Snail Kites (some are not of breeding age yet) in the United States. All of these birds are located in southern Florida. Since they are tied nearly exclusively to eating snails (food specialists), they really have no way of expanding their range. They can only occur where snails are large and plentiful enough to support a large raptor.

Their Genus name, Rostrhamus, is Latin for “hooked beak,” from rostrum (the beak) and hamus (a hook), which perfectly describes their long, slender, hooked beaks. This highly adapted beak allows the kite to reach inside and cut the snail free from the shell, without damaging the shell. It takes only a minute or two to successfully remove the snail from the shell.

Snail Kites hunt by flying low over shallow wetlands while looking down and scanning the water. When they spot a snail, they turn abruptly, swoop down, and dip their long, sharp talons into the water to grab the snail. They often fly to a well-used and familiar perch where they extract the snail and drop the shell. I spent some time investigating several of these perches and found dozens of large, empty snail shells piled up at each base.

While being a food specialist is something that has worked for the Snail Kite, it is also a very risky and dangerous strategy for long-term survival. For example, what happens if a disease wipes out the snail population or a lengthy drought causes the wetlands that are home to the snails to dry up? In addition, as wetlands are drained for farming and housing developments, the Snail Kite has no alternative habitat to relocate to. As you can see, being dependent upon just one food source is very risky.

It’s easy to tell the difference between the males and females. The males are a uniform blue/gray color with a bright-red eye. The females are brown with a speckled chest. At times, when the male grabs a snail, another kite will try to steal it away, which leads to spectacular aerial battles.

Seeing these midair interactions is always a thrill. But capturing images of the kite snatching a large snail from the water was my ultimate goal. I spent many mornings standing at the edge of the marsh, waiting for a Snail Kite to fly by and swoop down for a snail. On three occasions I was lucky enough to capture some decent images of this endangered species clinging to survival one snail at a time.