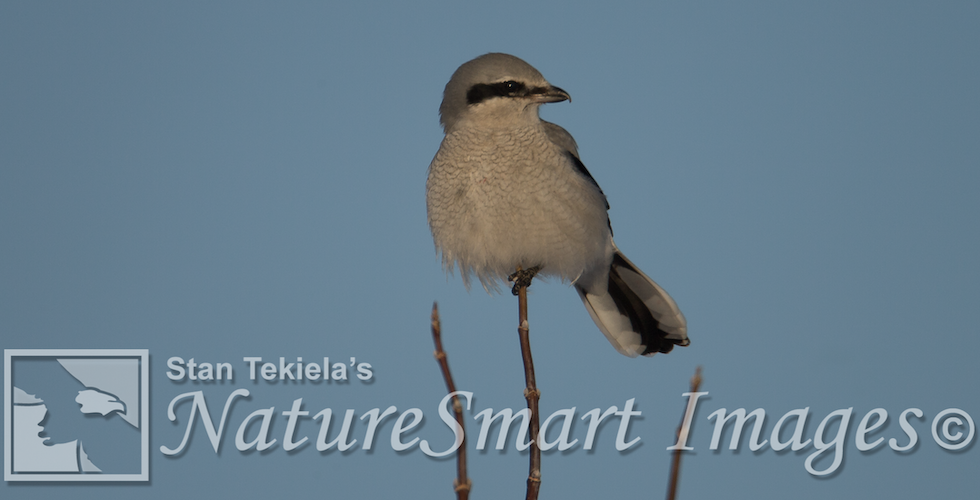 Wildlife photographer and naturalist Stan Tekiela loves rule breakers, and it seems that the Northern Shrikes are just that. Here is his story.

Critters in nature don’t follow the rules we people lay out for them. A good example of this is the Opossum. How crazy is it for a mammal to have its babies born after just 14 days of gestation and then spend the rest of their development outside of the womb and instead in a pouch located on their mother’s belly? How about White-breasted Nuthatches? They climb down trees headfirst while all the other birds are going headfirst up the trees. But one of my favorite rule breakers is the Northern Shrike (Lanius excubitor).

The Northern Shrike is a robin-size bird that is all gray with black wings and tail. It sports a handsome black mask like the fictional character Zorro, and it has a large, thick, black, hooked bill. It breeds way up north in the Northwest Territories of Canada and Alaska. However, the Northern Shrike often moves out of its breeding range during winter in 10-year cycles, based on the availability of small mammals, a major part of their winter diet.

Shrikes are considered a predatory songbird. These two words “predator” and “songbird” should not be used in the same sentence unless you are talking about a hawk, the predator, eating a songbird, the prey. By definition, predators kill their prey before eating it. And songbirds are defined as birds known for their songs. Songbirds are peaceful birds that inhabit our gardens and yards and fill the spring air with beautiful songs. Songbirds eat insects and seeds and don’t have a beef with any other birds. Except for the rule-breaking shrike.

To be a predator like a hawk you need some basic equipment such as large, strong feet with long, sharp talons for holding and killing what you have caught. Here is where the shrike does not follow the predator bird rule. Remember, the shrike is a songbird, with small, weak feet used only to walk and hold onto branches when it perches. But that doesn’t stop the shrike from killing what it wants to eat.

Northern Shrikes make a living in the winter by hunting, catching, and eating small mammals such as mice or voles. A shrike will perch high up and watch over an area for any movement below. Then it will fly out and hover just above the unsuspecting mouse before diving down headfirst to deliver a deadly blow with its large bill. Just yesterday I watched a shrike do what I just described and grab a vole and shake it violently for 2 seconds before the vole was dead. That fast. I was amazed.

Shrikes also hunt other birds. They are well known for flying into a bird-feeding station like a lightning bolt; as the birds scatter, the shrike will ram into a bird in mid-flight, stunning it and knocking it to the ground before landing on the prey and killing it with its bill.

Either way, after securing its prey, it carries the victum away with its bill. Again, because it’s a songbird with tiny, weak feet, it has to carry its food in its bill, unlike hawks, which carry their prey in their feet.

Now here is where it gets really interesting. The shrike is unable to swallow its prey whole, so it needs to tear apart its meal before swallowing. Again, a raptor such as a hawk will hold the prey item in its feet to stabilize it. The shrike’s feet are too weak to do this, so it has come up with an ingenious solution. It takes the dead little critter and impales it on a thorn of a shrub or on the barbs of a barbwire fence. Once the meal is impaled, the shrike can tear it apart and eat. Therefore, the bird is also called the butcher bird.

Northern Shrikes also use the impaled prey as a larder for future use. In one case, a shrike was seen to return to the mummified remains of a frog it had skewered almost a year earlier, showing that they also have a remarkable memory.