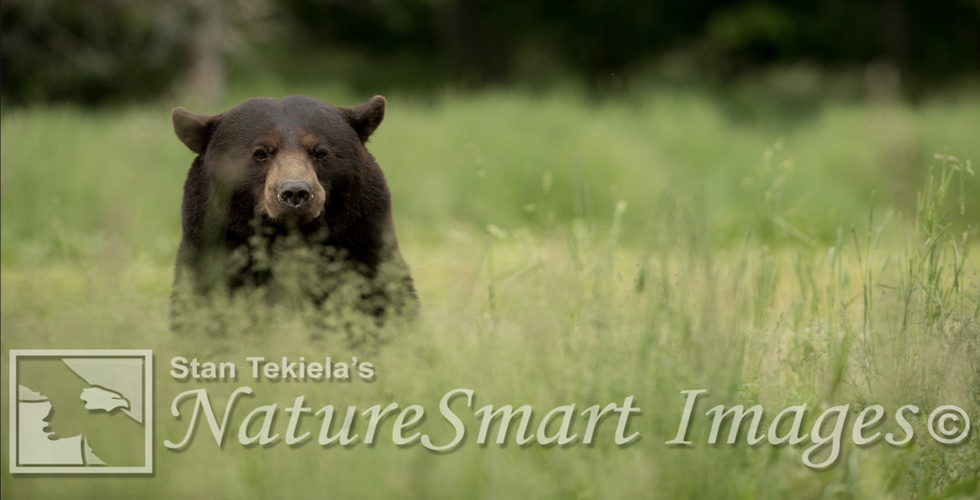 The American Black Bear, a Favorite Subject for Wildlife Photographers

Each year, Stan Tekiela leads wildlife photo tours. Dozens of photographers from around the world spend anywhere from a few hours up to a week alongside him, pursuing a number of natural subjects. One of Stan’s favorite subjects is, without doubt, the American Black Bear (Ursus americanus). Stan tells us all about this year’s Black Bear encounters.

The Black Bear is unique to North America and is not closely related to the other two bear species found here, the Brown Bear and Polar Bear. There are eight species of bears in the world: the American Black Bear, Brown Bear, Polar Bear, Asian Black Bear, Giant Panda, Sloth Bear, Sun Bear, and Spectacled Bear.

The American Black Bear is the smallest of our three bears in North America, but they are the most widely distributed. They are found in good numbers from Florida up to New England. They are also found across the northern states and slipping down into parts of the Rocky Mountains. Small populations even extend down into Mexico. They are also found throughout most of Canada and Alaska.

Black Bears in the Southern states are much smaller than the bears in Northern locations. This follows the eco-geographical rule—Bergmann’s Rule—that states that within a broadly distributed species, such as the American Black Bear, the largest ones are found in the Northern latitudes and the smallest are located in the warmest latitudes. So the bears in Florida range from 250 to 350 pounds, while Black Bears in Minnesota are 250 to 650 pounds.

The reason for this size difference is all based on keeping warm or staying cool. It is easier for larger animals to conserve warmth and stay warm in winter and for smaller animals to shed heat and stay cooler during summer.

During my bear photo tour this year, we were lucky to see several mating encounters. This is not something you regularly see. The mating season spans several months, most of June and well into July. Male bears, called bores, wander the woods following their noses, looking for receptive females. The females need to be at least 3 to 5 years of age before breeding.  Females only mate every other year because their babies take 1.5 years to become large enough to be on their own. Black Bear females have 2-4 young on average, but occasionally they can have as many as 6 cubs at once.

Bears have a unique reproductive system. After mating, the female (called a sow) doesn’t become pregnant right away. Instead, the fertilized eggs stay in a suspended state until autumn, usually in October or November. At this point the number of fertilized eggs that will implant into the mother’s uterine wall depends upon her overall health. If she has enough fat reserves and is in good overall heath, more eggs will implant and start to grow. If she doesn’t get enough to eat and is low on fat and in poor health, she won’t have any young at all.

Baby Black Bears are born in February while the mother is still in the winter den. At birth the baby bears’ eyes are closed, and they weigh only about 1 pound. They are only about 8 inches long and are covered in fine black hair. They are completely dependent upon their mother. They don’t open their eyes until they are nearly 40 days old and will feed on their mother’s milk for up to 30 weeks.

Mating is a brief encounter. The female is only receptive for mating for a few short hours, so the male often follows the female for many days before the time is right. He gets closer and closer to her; when she accepts his advances, he has just a few moments to mate. The coupling lasts less than a minute and she often turns and becomes aggressive towards the male. More times than not, he just turns and walks off in search of another receptive female.