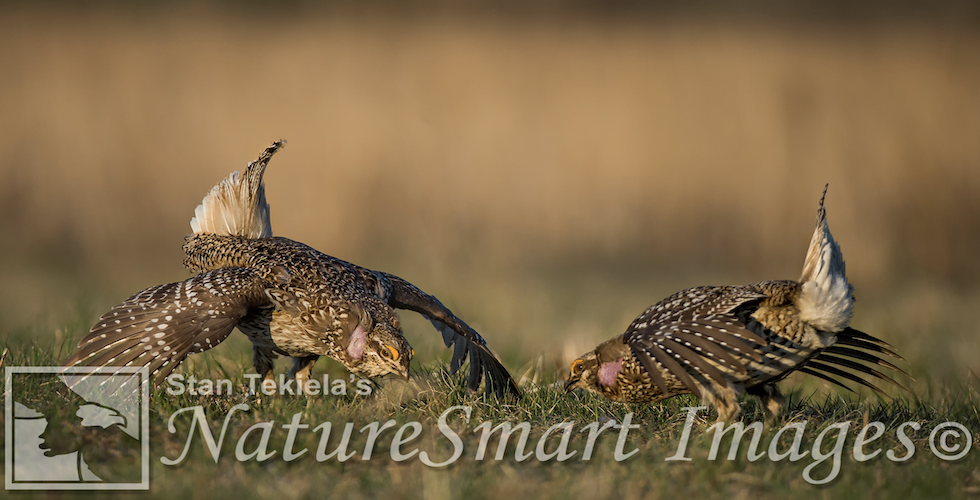 Stan Tekiela shares with us the fascinating mating behavior of the Sharp-tailed Grouse.

There is a group of birds that I find so very interesting and exciting. They are not tiny and colorful, nor do they sing a beautiful song; rather, they look plain and sort of familiar. In fact, they look much like a chicken. These birds are known as Gallinaceous birds or Chicken-like birds. This group of birds includes some of my favorites, such as the Ruffed Grouse, Sage Grouse, and Prairie Chickens.

If you read my column you might remember that I recently spent a week photographing and filming Sage Grouse in the high plains of Wyoming and Colorado. Last week I spent several mornings photographing another member of this wonderful group of birds, the Sharp-tailed Grouse.

All of these Gallinaceous birds are medium to large in size with stocky bodies and resemble farmyard chickens. They are an ancient group of birds with fossil evidence indicating they have been around for 50 to 60 million years. Gallinaceous birds are perfectly adapted for a terrestrial lifestyle, and most have an elaborate mating system involving the male doing something extraordinary and physical to attract the females.

Sharp-tailed Grouse males gather in a small open area (called a lek) at sunrise and dance or perform to attract females. The males will also square off with one another and challenge or fight with another male to establish dominancy. Females enter the lek and walk around looking at the displaying males to determine which will make the best mate.

Last week I woke at 3:30 a.m. and headed out to a private blind set up on a Sharp-tailed Grouse lek. It was completely dark when I arrived and climbed into the blind with my camera gear. I set up my tripod and camera and sat back to wait for sunrise.

As the night turned into day, and a faint glow of sunlight lit up the lek, 13 male Sharp-tailed Grouse walked, while others flew, into the dancing arena. Within seconds all the males started to display or face off with another male for some sparring.

I was thrilled to look through my 600 mm lens and observe in great detail the sparring and dancing of these magnificent males. But there were no females anywhere to be seen. Occasionally, one or two of the males would wander off and leave the arena while others held their positions and continued to spar or dance.

Suddenly on the far end of the lek, I could see the head of a female Sharp-tailed Grouse poking up over the taller grass. Immediately all the males spotted her and broke into a display dance. It was crazy, as if someone flipped a switch and all the males responded with the same dance.

The dance is very unique. The male bends forward, opens his wings in a droopy cupped shape, and raises his tail straight up in the air. Then the male stomps his feet, looking a bit like a wind-up toy with its spring wound too tight. The tail vibrates back and forth, and a large purple air sac inflates on either side of the bird’s neck. And the sound that each male makes while dancing sounds like a mechanical wind-up toy. It’s all so amazing to see.

As the female makes her way into the lek, each male intensifies his dancing and even tries to intercept her so he might dance right in front of her. She strolls around casually, looking over the prospective suitors. What exactly she is looking for in a mate is unknown. Perhaps she is looking at his tail feathers, or his purple throat sac, or especially how he performs his dance.

At some point the female makes her selection. Mating takes just a few seconds, followed by a ruffling of the feathers. And off she goes to select a nesting sight and lay her eggs. The male goes back to dancing and has nothing more to do with the female or the chicks.

For several hours each morning throughout spring, this ancient ritual plays out as it has for millions of years. When I study and photograph these rituals, it is like connecting with the ancient world.