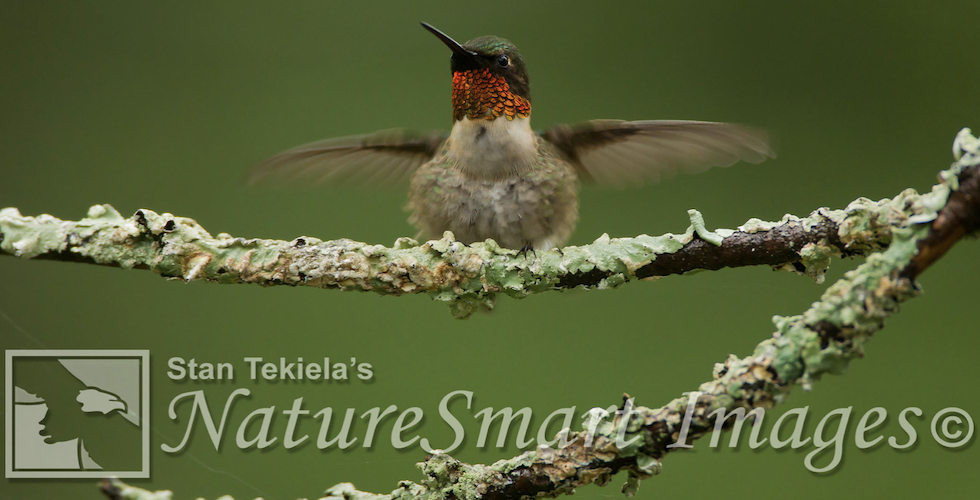 Nesting in the Dog Days of Summer

Today, wildlife photographer and naturalist Stan Tekiela tells us about birds who nest in the dog days of summer. Read on!

When you think about birds and nesting, you may automatically think “spring.” But I was recently photographing a Ruby-throated Hummingbird nest in August and considering the fact that there are many species of birds that purposefully wait until summer to begin nesting. In some species, they are nesting in summer because they are on their second or, in some cases, third nesting of the year. Let’s look at some of these late nesters.

During spring, it seems like all the birds are in a mad dash to nest and have baby birds. The spring air is filled with beautiful bird songs. Birds are flying here and there, gathering nesting materials, and are hard at work building nests. But in summer the air is quiet, and the fever pitch of nesting is nowhere to be seen. But is it really?

Some species, such as the American Goldfinch and Cedar Waxwing, are birds that wait for the dog days of summer before nesting. The goldfinch often waits until the local thistle plants have finished flowering and have produced a large crop of seeds. Not only do they need the seeds for food, but each thistle seed has a thin soft white fiber attached to it, which the goldfinch uses to line its nest cavity. In fact, they use so much of the thistle down to line their nests that the interiors of the nests often appear white.

The American Goldfinch is a strict seed eater and only occasionally feeds on insects. Much of the goldfinch’s food source (plant seeds) begins to ripen in late summer. Late nesting helps them to have a consistent food source for all of their growing chicks.

Another classic late-nesting bird is the Cedar Waxwing. This amazing, crested-and-masked bird is inextricably tied to a diet of fruits. This is called being frugivorous. Because the fruits that these birds depend upon are ripe and most abundant in late summer, the waxwings hold off on nesting until August or even September. Some have nested as late as October in some parts of the country.

There is an interesting relationship between the Cedar Waxwings and the fruit trees. The birds are dependent upon the trees’ fruit production for their food. However, on the other side, the trees are dependent upon the birds to disperse their seeds far and wide. The birds swallow the berries whole, which contain the trees’ seeds. As a berry passes through the acid environment of the digestive system, the flesh is stripped away and the outer coat of the seeds (seed coat) becomes weakened or starts to open, which encourages the seed to germinate. This is called scarification. In fact, many berry seeds must pass through a bird’s digestive system in order to germinate and grow. Thus, these two very different species, bird and plant, depend upon each other for survival.

Some species of birds, such as Eastern Bluebirds, Blue Jays, or even Ruby-throated Hummingbirds, also nest in summer. But the big difference is that these birds don’t wait until summer to breed like the others. For these birds it is their second or third nesting for the year. They first nest in spring and raise the first brood of baby birds. When summer rolls around they continue breeding and are on their second or third batch of babies.

That is the case for the Ruby-throated Hummingbird. Hummingbirds only lay two eggs and have two babies. The mother sets up her own territory, separate from the male. Hummingbirds don’t form pair bonds between males and females. They lead separate lives. Only when the female has built her nest does she leave her territory and seek out a male for breeding. She returns to her territory to lay eggs, incubate, and raise the young.

Eastern Bluebirds often have two and sometimes three nesting attempts per summer. The more experienced pairs will split the nest duties after the first batch of babies is born. The male will protect and feed the young while the female starts to build another nest and begins to lay more eggs.

So even though we’re in the dog days of summer, there is still a lot of nesting activity going on. You just need to get out and look for it.