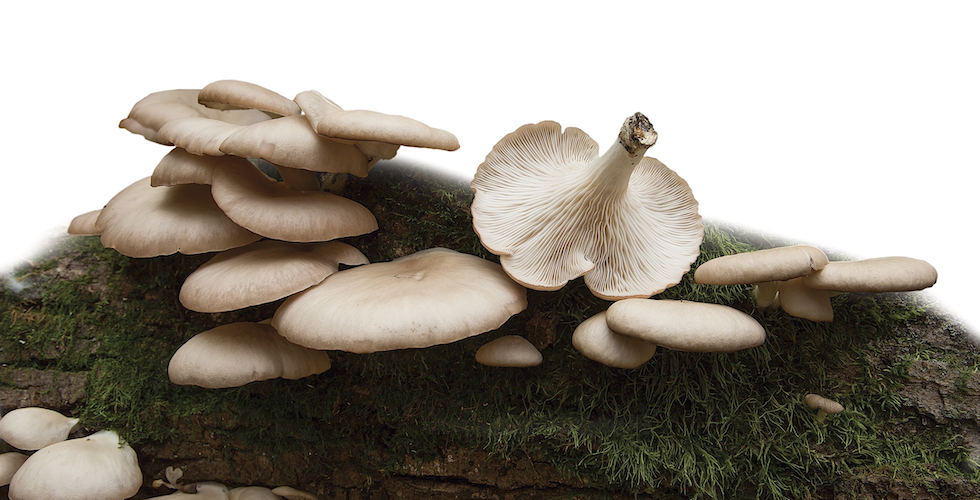 Oyster Mushrooms: The Seafood of the Forest

There are several oyster mushroom species, but they all look the same and all are edible. One of the identifying characteristics of oyster mushrooms is the lack of stems or stalks. Some may have a short or stubby stalk, but most are stalkless.

The common and species names of the oyster mushroom refer to the shape of the cap. The round clam, or oyster-shaped, cap has a rolled edge and can be pure white to buff-gray. When viewed from above, this mushroom is often described as a clam attached to a log by its hinge. Its pliable cap is smooth to the touch.

Finding oyster mushrooms is not difficult because they grow in great quantities. It is not uncommon to spot a large cluster from your vehicle while driving. However, the usual method to find oysters is to walk through the woods. A pair of binoculars is helpful to spot them on trees and logs in the distance.

Rainfall is the most important component of the oyster’s life cycle, so get out and search for them within one or two days after a soaking rain. In dry years, concentrate your search along creeks and rivers because of the available moisture.

Oyster mushrooms fruit in early spring and throughout the summer, if the weather is favorable. However, they are more abundant in the fall. The oyster is so eager to fruit that sometimes a large cluster will emerge in northern states on a warm winter day, only to be frozen that night. They may be harvested when frozen with a sturdy knife or small ax.

In the warmer southern states, the oyster fruits all winter with sufficient rainfall. Unless you plan to haul a ladder or bring a pruning saw with you on your hike, be prepared to tie your knife to the end of a long stick or climb a tree to get the mushrooms that are higher than your reach.

Begin searching in a deciduous forest known to have a number of downed trees—the favored growing medium for this delicacy. Oyster mushrooms grow in large overlapping clusters—or sometimes as a solitary mushroom—on dead aspen, elm, oak and maple trees, and, rarely, on conifers.

Oysters often grow on the same log year after year, so when you locate a site, return during favorable weather conditions to check for fruiting. Take a large collection basket because a typical patch can yield several pounds. In warm weather, the oyster decays quickly, so cook or dry your harvest as soon as possible.

The gills of the oyster mushroom are white and extend down to the attachment at the tree. An oyster’s gills are so close together that you can fan them like the pages of a book. Note that this mushroom has white gills and a white spore print like the deadly Amanita, but don’t worry—it lacks two other Amanita characteristics. The oyster does not grow from a cup, and it doesn’t have a ring around a stem. In addition, it isn’t terrestrial. Oysters grow only on intact, solid wood, not on the ground in soil. All oyster mushroom species are edible, and
it’s easy to obtain a spore print. The oyster print is white or pale lilac.

Harvest only soft and pliable oysters. As oysters age, they turn yellowish-brown and droop, becoming inedible. Check for small insects feeding on the oyster. Place your hand under an oyster cap and tap the top. A shiny black or red-and-black beetle may fall into your hand. This can mean that you found an oyster, but it also means that the beetles arrived first. These insects are easy to remove by hand or by submerging the caps in water. If the oyster is infested with white beetle larvae, the mushroom is not edible.

Some insects live and feed on specific mushrooms. Be sure to gather only the mushrooms you can use and leave the rest for the insects and other organisms. Insects play a major role in natural food chains and need these places to complete their life cycles.

Despite its name, the oyster mushroom doesn’t taste anything like seafood. In fact, you’ll find that they sometimes have a faint aroma of anise, especially when collected from aspen trees. Generally, this fleshy mushroom has a mild nutty flavor. You may find it on your grocer’s shelves and served in restaurants because they are easy to grow commercially.

Oysters can be grown at home from kits or in large-scale production using wheat straw, sawdust, coffee grounds, or egg cartons as a growing medium. It’s not as easy as throwing some mushroom spawn (mycelium) on a pile of tea bags, but many people have been very successful at cultivating them. European cultivation of oyster mushrooms began in Germany after World War I, and now they are produced all over the world, including in the United States.

Oyster mushrooms are easy to recognize, great to cook with, and very common throughout North America. They dry well for long-term storage and can be available all year long.

Oysters are a perfect choice for beginners. Purchase them from a local supermarket and examine them for the characteristics discussed. Then go out and start mushrooming for your own wild oyster mushrooms.

Stan Tekiela’s book Start Mushrooming focuses on seven edible mushrooms that are easy for a novice to identify, including oyster mushrooms. Why not give it a try?