Grebes are Rushing and Dancing on the Water

Wildlife photographer and naturalist Stan Tekiela talks to us about Grebes rushing and dancing on the water.

When I was young, I watched The Wonderful World of Disney on Sunday evenings. Every now and then, the show would air a short video clip, set to classical music, of western grebes running across the surface of the water. I was mesmerized by their behavior; now, every time I photograph grebes, I think of those marvelous childhood memories. 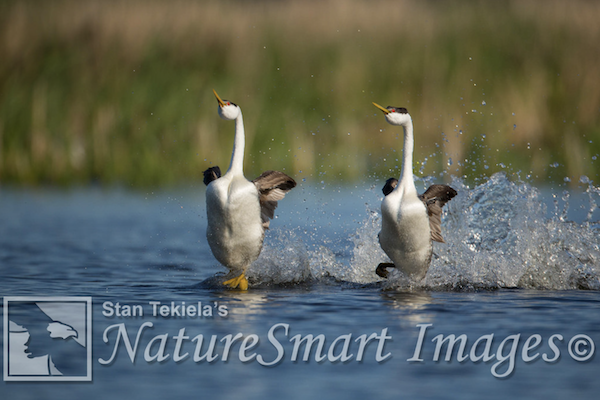 The Western Grebe and its nearly lookalike cousin, the Clark’s Grebe, are the only waterbirds to perform such an amazing and elaborate display. Shortly after returning to their natal lakes to breed, they begin to display and form pairs. One of these displays is called rushing.

When Grebes rush, two or more individuals leap out of the water and run side by side, cocking their necks and heads while drooping their wings. A rush can take place in just a few yards, or it can cover 30–40 yards or more. All the while, their feet are loudly splashing water in all directions. At the end of the rush, the participants dive headfirst into the water and slip beneath the surface. 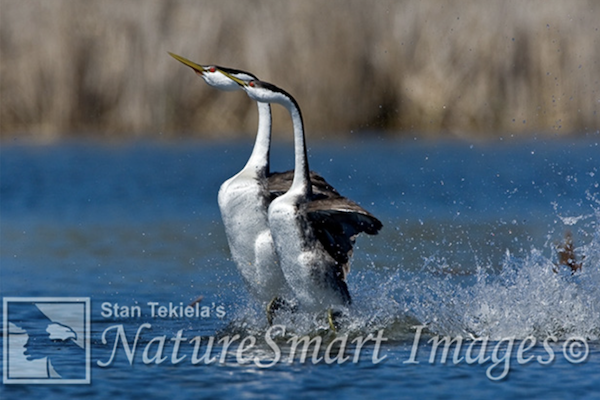 Rushing can occur between a male and a female, two females, two males, two males and one female, or any combination of these. the variety of partners indicates that Grebes rush not only to attract and court a mate, but also to compete with each other for a mate. 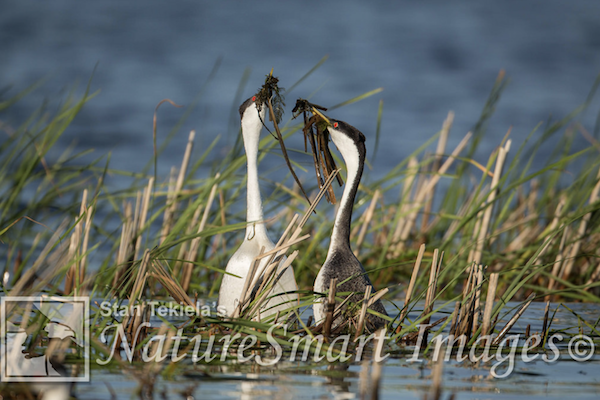 When an established male and female perform a rush, it is often followed by another highly specialized display called a weed dance or weed ceremony. In a weed dance, a courting pair dives and comes back to the surface with small bunches of weeds in their bills. The partners swim toward each other with erect postures, raised crests on their heads, and weeds drooping from their bills. Once they meet, with their heads very close, they present their gift of weeds to each other and give a trilling call. Then they shake their heads back and forth, which often sends the weed offerings in all directions, effectively ending the ceremony. 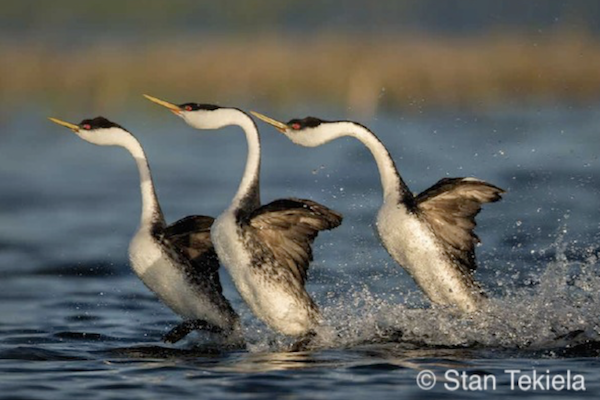 What I enjoy most about Western and Clark’s Grebes is that a brood of hatchlings will pile on the back of a parent and ride safely above the water. At other times, a parent will tuck 3–4 babies inconspicuously under its wings. The babies only poke their heads out at an opportune time—when the other parent arrives with a fish.