Every December near the holidays, naturalist and wildlife photographer Stan Tekiela takes a trip to Wyoming to film and study bighorns (Ovis Canadensis). It’s always a fun adventure, and this year was no different. Bighorns are a member of the mountain sheep group consisting of three species, the Bighorn sheep, Dall sheep, and Stone sheep. There is one other member of this group, the Siberian Snow sheep, but it’s not found in North America.

Wild sheep crossed the Bering Land Bridge from Siberia into Alaska about 1 million years ago. They have spread throughout the western half of the country, ranging as far south as the Baja of California. These ancient wild sheep diverged into the modern-day Dall sheep and Stone sheep that live in Alaska and northwestern Canada, as well as the Bighorn, which thrives in the Rocky Mountains all the way to Mexico.

I’m always amazed by the size of these sheep. You might think they look really large, but when you get up close you’ll see that they’re short. They are only about 35 inches tall at the shoulder—just under 3 feet. The Bighorns scamper across snow and ice-covered mountain cliffs in search of food and to escape predators, so having a low center of gravity is essential. They may be short, but they sure are stocky. An adult male can weight more than 400 pounds, and some really big boys can weigh up to 500 pounds. 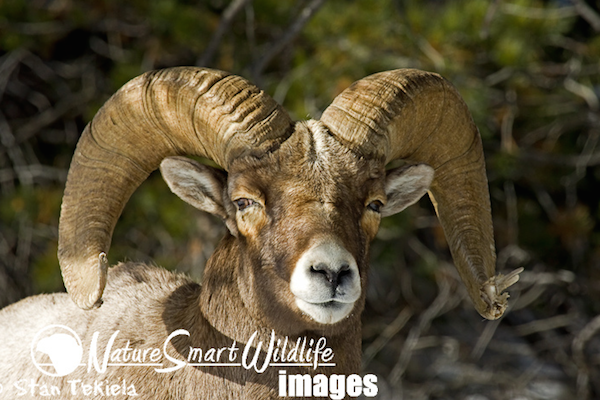 Both the males (rams) and the females (ewes) have horns, but the males are much larger than the females. The male’s horns constantly grow to form a tight circle. At about 5 or 6 years of age, the male’s horns are often large enough to complete the circle. At this point, the ram is referred to as a full-curl ram. You can actually see the growth rings on the horns. There are many thin lines indicating growth, much like a tree. But there are also larger, thicker lines that mark each year. So you can quickly count the thicker rings to estimate the age of a ram.

A ram’s horns can weigh up to 30 pounds. Remember these are not antlers but true horns that don’t fall off each season. They have a bony core with an exterior that continues to grow. The ram’s horns give these sheep their common name, and they are also at the center of an elaborate mating ritual. The horns play such an important role in a ram’s life that, at full size, they can weigh about the same as all the bones combined in the ram’s body. 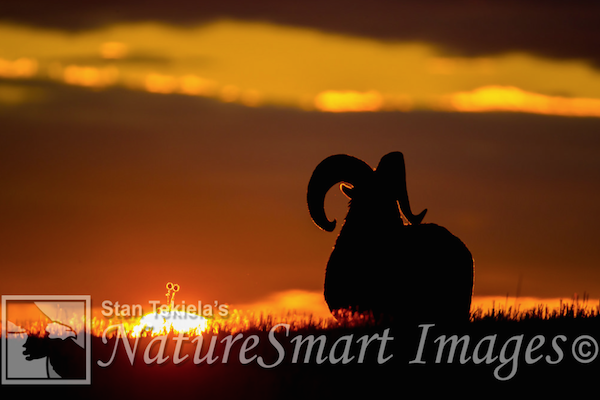 Just about everyone knows about how male Bighorns of similar size will challenge each other to a head-butting contest. I’ve seen it many times, and it still makes me smile. One male will walk up to another male and bump his body up against him. If the advancing male doesn’t get any response, then he will use one of his front legs to kick the belly or the private parts of the other male to illicit a response.

This might go on for several minutes and many kicks. Often the other male will kick the challenger back. They exchange front-leg kicks for a couple minutes before one backs up to stand and stare at the other. Their eyes get all buggy and they rear up and charge towards each other. One holds its head to the left and the other to the right as they charge. How they decide who turns which way is not known. Suddenly, they crack their heads together, which sounds like a gunshot and echoes off the mountain walls. 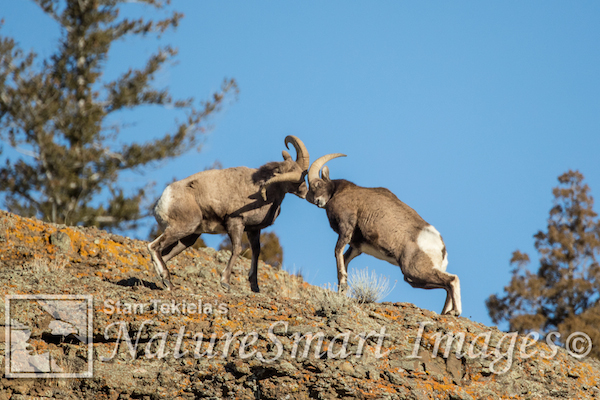 The impact is often so forceful that it knocks them off their hind feet. Right after, they need to shake their heads, as if to shake off the impact. Usually they don’t bang heads together for at least a few minutes afterwards.

Most often, these head-butting challenges are only between equally matched rams. Only now and then does a big boy go head-to-head with a smaller ram. Bighorns live in herds comprised mainly of the females and their offspring. During the rut, the males move around from herd to herd looking for females who are ready to mate. This is when the challenges happen and we see competing rams butting heads. And this is always the opportunity I am looking to document.