The Argiope Spider, the Predator of the Prairie

It this week’s post, Stan Tekiela shares with us the fascinating world of the Argiope spider, also known as the Yellow Garden Argiope.

During the lazy days of summer, nothing in nature seems to be moving or doing much of anything. However, in autumn it feels like everything is on the move or rushing to prepare for winter. Many of our regular backyard birds have already migrated. Hummingbirds are well on their way to the tropics. Thousands of hawks have moved out of the northwoods and are migrating south to escape the coming winter. Meanwhile, deer, elk, and moose are ready to do battle in this year’s mating season (rut).

One sure sign of the end of summer is that the fields and prairies seem to be filled with a ferocious predator. A predator that is so efficient, it takes both small and large prey. Some prey is tiny by comparison to the predator, while other prey is more than twice its own size. What kind of killer could this be? It’s the Argiope spider, often called the Yellow Garden Argiope.

There are several species of the Argiope spider in the northland. They all look and act in similar ways, so I will talk about them in general. These spiders belong to a large group called the Orb Weavers. They are best known for the orb-shaped webs they spin. Some of these webs are very large, measuring upwards of 3 feet in diameter. These webs are usually constructed late in the day, in order to be ready for nighttime hunting. 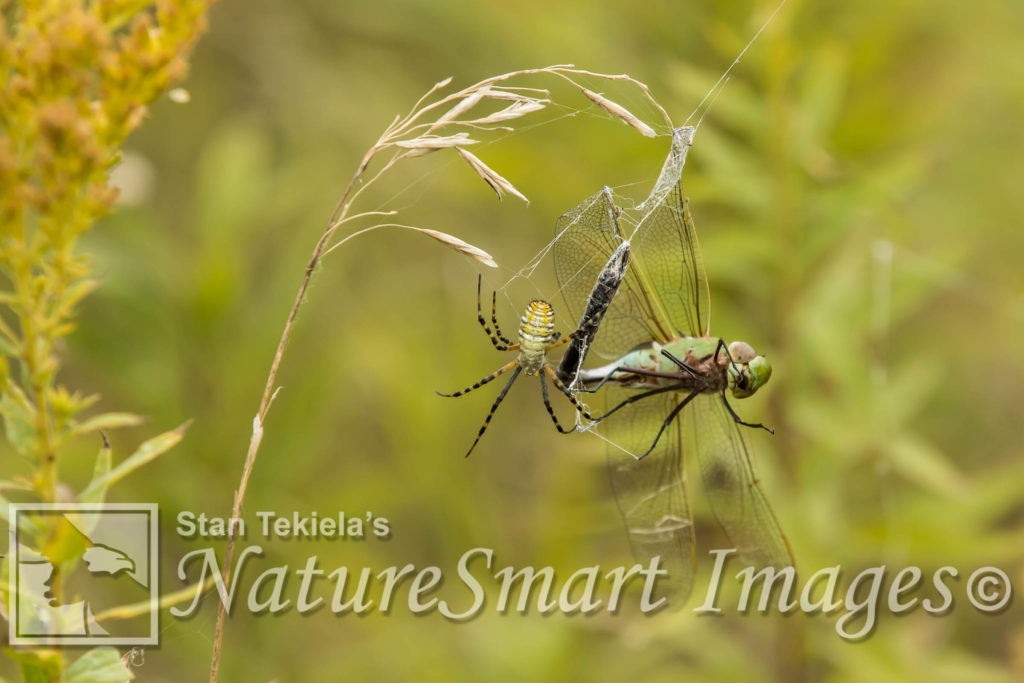 The webs are almost always vertical and stretch between tall stalks of dried grass stems. Often, the top of the grass stem is bent over, forming an arching top to anchor the web. The spokes of the web, called the radii, radiate out from the center to the outer edge. These threads are not sticky and allow the spider to move around the web without being caught themselves.

The circular threads are sticky and ensnare any hapless insects. In the center of the web is a very unusual, tight zigzag structure, made of special webs. This is called a stabilimentum and reflects UV light and is thought to entice flying insects to check it out and thus get caught in the web. When we see this, we only see a white zigzag patter of threads, but to the insect it shines like a bright beacon.

The Argiope spider sits in the middle of its web, inverted, facing down. It places its extremely long legs on the radii threads to “feel” for any vibrations coming from the web. Even though they have eight eyes, their vision is not the greatest. The females are much larger than the males. A good-size female can reach 2.5 inches, including her legs. The body is about 1 inch. The male is almost half this size.

The abdomen (the biggest part of the spider) is bright yellow with black and yellow stripes and spots. The front legs tend to be all black, while the other legs are a combination of black and yellow. I think they are very attractive looking spiders. They tend to live in small colonies, so once you find one web with a large spider hanging in it, just turn and look around because you will likely see more.

These spiders don’t attack people and really don’t want anything to do with people. They spend many hours constructing their webs and even more hours waiting for something to become ensnared. Once a fly or mosquito becomes trapped in the web, the spider quickly runs over to it. It will approach cautiously at first, feeling with its front legs. The spider will bite the prey to inject a venom that will subdue the prey and start to liquefy its insides. If the spider is hungry, it will eat right away. If not, the spider will spin the prey around and around, encasing it in a thick spider silk so that it can be consumed later.

Recently, I was out filming these super cool spiders in a native prairie. I was walking down a trail and heard the wings of a dragonfly struggling. To my left I could see a large web with a dragonfly caught in the corner. Before I could set up my camera, the Argiope spider had already advanced and given the dragonfly a venomous bite before retreating a short distance away.

When I got my camera set up, I was able to capture the spider moving back in to start feeding. As I filmed this life-and-death struggle, it occurred to me that this was a predator eating a predator. Dragonflies are predators of the sky, and the spider is the predator of the prairie. Life is never easy for animals in the wild.