In today’s NatureSmart column, Stan Tekiela shares with us about flying squirrels. 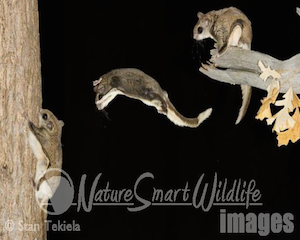 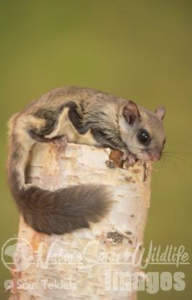 By some estimates, in the areas where flying squirrels exist, they many outnumber the daytime tree squirrels. Because flying squirrels are highly nocturnal and only become active well after dark, we don’t notice them zipping around the trees under the cover of darkness.

Its large bulging eyes are a tip-off to the nocturnal behavior of this little-known critter. In proportion to the size of its head, the eyes are huge. Large eyes allow more light-gathering ability in dark conditions. After all, they need to see where they are going and, more importantly, judge the distance to a landing spot on a tree. Think about it: They are whizzing through a branch- cluttered forest at relatively high speeds in the dark. It is really an amazing feat.

Of course, “flying” squirrel is a bit of a misnomer because they don’t actually fly. Flying implies that they can accelerate and gain altitude at their control. In fact, they just glide on a downward path after leaping off a tree. The process of gliding is proceeded by first identifying a target landing spot. This often involves the squirrel bobbing its head up and down, judging the distance and the path to the landing spot. 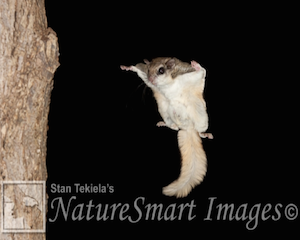 They glide with the aid of a furry, parachute-like skin membrane that stretches from wrist to ankle and is called the patagium. When fully stretched out, the entire body of the squirrel becomes a wing. Even its tail is flat and aids in the gliding and also acts like a rudder to help maneuver around objects and slow down. The fur grows only along the sides of the tail, giving it a flat appearance.

Glides can be upwards of 50 feet in distance, but most are much shorter. Almost always the glide terminates on another tree trunk. When one is about to land, the squirrel pulls up its front legs and lowers its tail to catch some air, like an air-break. They always land head upright, then immediately scamper around to the opposite side of the trunk. Presumably this is a way to avoid any predators, such as owls, that might be following them closely.

Flying squirrels are the most carnivorous of the tree squirrels. In addition to eating seeds, they eat bird eggs, baby birds, small mice, or any dead animal they can find. Insects are also a big part of their diet. Another unusual behavior of the flying squirrel is gregariousness. They live in family units of many individuals in one nest. 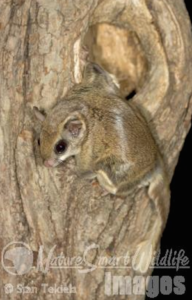 Baby flying squirrels are born in a tree cavity and are naked, eyes closed and helpless. They nurse on mother’s milk, weaning at 5-7 weeks of age. They have several broods of babies each year. Most flying squirrels live only 2-5 years, but some have lived upwards of 10 years in captivity.