Valentine’s Day and the Bald Eagle

Valentine’s Day always makes me think of the Bald Eagle. I know, I know: It’s the symbol of our country, but it’s not exactly the symbol of romance. Still, the holiday and the bird are forever connected in my mind, thanks to one of nature’s happy coincidences. While we’re out choosing the perfect card, buying the perfect gift, and planning the perfect dinner, eagles are starting to get romantic too—and their idea of romance is way more awesome than ours! 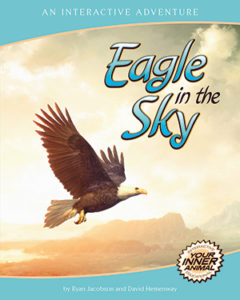 I learned plenty of interesting details while researching and writing the children’s book Eagle in the Sky and by following an Eagle Cam. Few were as startling or as intriguing as the mating rituals of the Bald Eagle. (No, that information didn’t make it into the book.) And here, in the northern part of the country, mating often begins around Valentine’s Day.

The males and females first become ready to mate when they are 4 or 5 years old. However, they sometimes wait a few years. Perhaps they’re looking for Mr. or Mrs. Right because, yes, the eagles do generally mate for life.

When a match is made, the Bald Eagle and its partner build their nest together. If you’ve seen a nest, then you know it’s mostly made of sticks and can be pretty big. The average nest is around 5 feet wide. Up here in Minnesota, nest building happens in January, giving the raptors a month to prepare for their own Valentine’s Day. They do much more than just build a nest, though. Things get crazy as the two eagles fall for each other—literally. 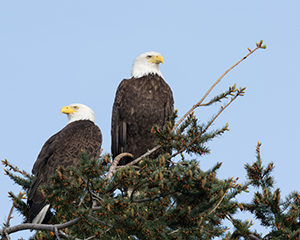 While there’s a variety of mating rituals, the one that puts all others to shame has been described with words like “whirling,” “cartwheels,” and even “death spiral.” The Bald Eagle partners soar high into the air and lock talons. Then they fall—whirling, cartwheeling, spiraling—for as long as they dare. They release their grip at the last instant, breaking apart and flying away just in time (although there have been instances when a duo isn’t fast enough, and the eagles crash into a tree or the ground). According to the National Eagle Center, these behaviors “test the strength and agility of the potential mate.”

It’s worth noting that, contrary to popular belief, the eagles do not mate in the air. That happens on a tree branch or in the nest. After that, well, you can start looking for eggs on the Eagle Cam 5 to 10 days later.

Of course, you should still feel proud of yourself for your romantic Valentine’s Day plan. Just know that, however exciting or elaborate it might be, the Bald Eagle has you beat.