Mammals in the Desert 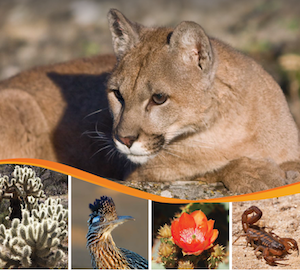 If you took a flight over a desert, what would you think as you flew over? Many people would probably think they were flying over a barren wasteland. But deserts aren’t dead; far from it, they are teeming with all sorts of specialized plants and animals.

The Sonoran Desert alone boasts more than 500 species of birds, 130 species of mammals, more than 100 species of reptiles, and more than 2,500 plant species. And if you spend any time in the desert, you’ll see, hear, or smell evidence of all of this life: Coyotes howl during the evening, owls call out, breezes bring the sweet smell of flowers and plants, and it’s impossible to miss the towering saguaros, the flowering ironwood trees, and the vivid displays of wildflowers, or the butterflies and hummingbirds zipping from one bloom to another.

There are four major deserts in North America. The Chihuahuan Desert is the largest and covers about 175,000 square miles in Mexico, with fingertips in southern New Mexico, southwestern Texas, and the far-flung reaches of southeastern Arizona.

The Great Basin Desert is our second-largest desert and occupies more than 158,000 square miles; it stretches from southern Idaho and the southeastern corner of Oregon to western Utah and much of northern Nevada.

With an area of 106,000 square miles, the Sonoran Desert is the third largest, and it is located in southern Arizona, southeastern California, part of Baja California, and northwestern Mexico.

The Mojave Desert is the smallest desert in the Southwest, at 54,000 square miles. It covers southern Nevada, the southwestern corner of Utah, part of southern California, and a small piece of western Arizona. In this book, we will focus on the Great Basin, the Mojave, and the Sonoran deserts, as they are primarily found in the western United States.

Mammals come in all shapes and forms and eat everything from plants, seeds, and insects to other mammals. In the Southwest, mammals are not especially abundant, as the heat and arid conditions pose special challenges. Nonetheless, some especially hardy mammals are found in the region, and they survive because of their special adaptations.

Here are some of the mammals found in the desert: 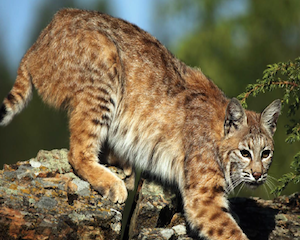 Mountain lions are highly adaptable and live comfortably in a desert habitat. They exert little energy during the hottest part of the day, and they are primarily nocturnal, resting during the day in caves, mines, beneath shrubs, in washes, and in other cool, shady areas.

Bobcats are nocturnal and very secretive. They are difficult to observe in the wild. Water sources are perhaps the best places to look for bobcats; look in the early morning or late afternoon. They also like to sit on top of rocks and use them as lookouts. 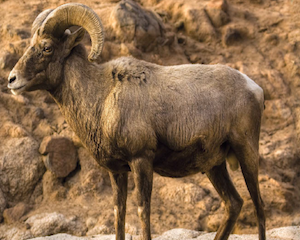 Desert bighorn sheep are very well adapted for desert life. Bighorns possess sweat glands that help prevent overheating, and they also pant to dissipate body heat. A bighorn’s thick fur isn’t just useful for the cold; it also helps protect it from some of the effects of the heat. Bighorns can also go a long time without water, up to a week, and they often obtain much of the moisture they need from their food. What’s more, their internal organs (stomach and colon) are adapted to conserve moisture within the body, and they produce dry feces and concentrated urine, further conserving moisture.

Like many other animals, bighorns try to avoid the worst of the desert sun, and they seek cool areas (shade, soil, rocks, caves, mines, canyons, and higher elevations) to rest during the hottest part of the day. They can also withstand an elevated body temperature—more than 5 degrees higher than usual—without harm. 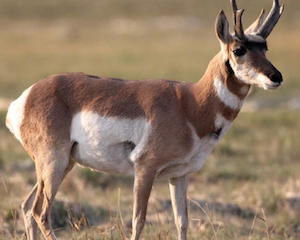 Mule deer and pronghorn: During the day, mule deer rest under bushes and in the shade to stay cool. Mule deer have huge ears that can move independently and help them dissipate heat, and they can regulate their body heat via panting. Mule deer also have specially adapted lips that allow them to strip leaves from spiny desert plants without being subjected to the spines.

Pronghorn are well adapted to desert life. During hot periods, the guard hairs on their back/mane can be raised, helping cool the skin. And when it’s cold out, these same hairs (when lowered) help shut out the cold. Because pronghorn derive most of their water needs from food, they can also survive long periods without water. If the vegetation has a moisture content of 75 percent or more, pronghorn don’t need to drink water at all. 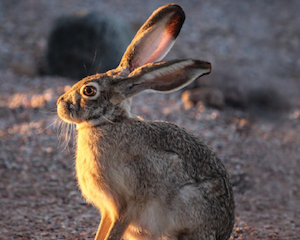 Rabbits and hares: Desert cottontails are small- or medium-size rabbits with large eyes and buff-gray coloration on the back, sides, and face. The shoulders and legs are darker; the rear legs are larger and longer than the front legs. The tail is gray-black above and white below. The whiskers are black and the hind legs are longer than the front legs. Black-tailed jackrabbits are large rabbits with big eyes; they are light gray along the back and face and have lighter underparts.

Both the desert cottontail and the blackmailed jackrabbit are well adapted for desert life. Both avoid the daytime heat and obtain most of the water they require from their food, so they aren’t dependent on sources of open water. Their waste products are also concentrated and contain little water. Both species also have light-colored fur that reflects light, and their ears act as heat dispersers; incredibly, the veins inside the ears can dilate, allowing them to disperse up to one-third of their body heat. (For this reason, they will often sit with their ears up, facing the oncoming wind or breeze to cool off.) Jackrabbits can even store heat during the day via a temporarily raised body temperature and then release it at night.

For more fascinating insights into desert life, check out Karen Krebbs’ book Desert Life:  A Guide to the Southwest’s Iconic Animals & Plants and How They Survive.