Searching for the Elusive Bobcat

In this week’s column, Stan Tekiela discusses the elusive bobcat. 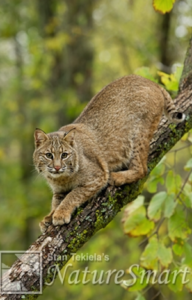 I’ve been sitting for hours, driving for days, and staring through binoculars at distant hillsides for longer than I can remember, searching for the bobcat (Lynx rufus), the smallest of our wild cats. Today, I am in California, trekking the foothills, hoping for a glimpse. No doubt the Bobcat is the most widespread and common of our four cat species (bobcat, lynx, cougar, and jaguar). In some regions of the country, bobcats can be fairly common, while in others not at all. Here in California, they are fairly common but extremely hard to find.

Days upon days of searching have resulted in seeing about eight bobcats so far. Spotting them isn’t the hard part. Getting close enough to capture some images is. When approaching these wild cats you must take into consideration not only not being seen and heard but also not being smelled. If the wind is blowing in the wrong direction, the cat is gone in a split second.

Just like any animal, Bobcats are highly adaptable and can live in a wide variety of habitats, from forests to deserts, forest edges to swamps. Basically, if there is enough prey (food) around, they can make a living.

The cats I am seeing are anywhere from gray to rusty brown; the diversity in their coloration is surprising. Most are gray to brown with black frosting. They have extra-long fur around the neck that makes them look like they are wearing a collar. They have short black tufts of hair on the tips of their pointed ears and a very short or bobbed tail, hence their common name. Completing the look are dozens of black spots. I am amazed at how well they blend into just about any environment, to the point where if they step into the brush they disappear completely. Believe me, it has happened many times on this trip. 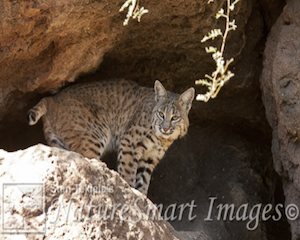 Bobcats hunt small prey, such as rabbits and quail, but they will take just about anything they can catch. In this location, the Bobcats really seem to like hunting gophers, and they compete with the large coyote population here in California to get them. I’ve watched a number of cats creeping across an open field, listening intently for any signs of digging gophers. Once located, the cat hunkers down about 3 feet from the busy digging gopher.

A couple of days ago, I had this very scenario unfold right in front of me. Hiding behind logs and other obstacles, I was able to creep up close enough to capture some images. The cat was completely locked onto the unsuspecting gopher. Through my camera’s lens I could see the cat, nearly flat to the ground, ears and eyes locked onto the spot where the gopher was digging.

Occasionally, I could see the gopher’s head pop up as he was pushing dirt out of his tunnel. At these moments the Bobcat’s tiny tail would start twitching and swinging uncontrollably back and forth. The bobby’s hind feet and legs coiled up tightly and were ready to spring into action. It was tense watching through the lens, knowing how important it is for the cat to eat but, on the other hand, being concerned that this gopher might lose its life. 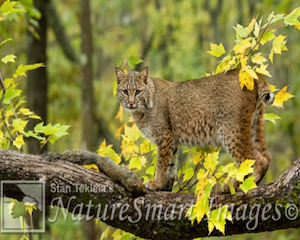 For several long minutes this went on. All of us, the gopher, bobcat, and myself were all frozen, waiting to see what would happen. Again the head of the gopher would pop out and the cat would begin to vibrate in anticipation the way cats do. I kept wondering why he didn’t pounce on the visible gophers. I am sure that years of successful hunting have taught this cat well and when it’s the perfect time to jump. But the gopher disappeared down its hole once again.

Several minutes passed and it was obvious the gopher was not going to push out any more dirt. The cat relaxed a bit and repositioned its coiled hind legs. Then, in a last act of desperation, the cat rushed the hole and stuck its paw way down the hole, fishing for the gopher. No such luck, he came up empty pawed. Dejected and still hungry, the cat walked off, once again looking and listening for busy gophers. I’ve got another four days of hunting for images of bobcats. Until next time…