The Amazing World of Dinosaurs 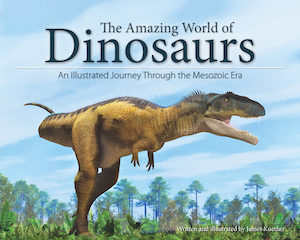 Dinosaurs have filled us with wonder since the first monstrous bones were pulled from the earth hundreds of years ago. For centuries, we imagined dinosaurs as giant, clumsy brutes—but science has since revealed them to be so much more. They were living, breathing animals that had moments of great power and ferocity, but also periods of quiet beauty. Of course, science cannot tell us how they behaved or how they interacted with their environments. For that, we need our imaginations.

Amazing paleoart reflects our current knowledge of these breathtaking creatures.

The Amazing World of Dinosaurs is found at the intersection where imagination and knowledge meet. It features breathtaking artwork that accurately reflects our current knowledge. These captivating images are paired with James Kuether’s research and insights, which make dinosaurs and the Mesozoic Era accessible to anyone.

Let James Kuether take you on an Illustrated Journey Through the Mesozoic Era. 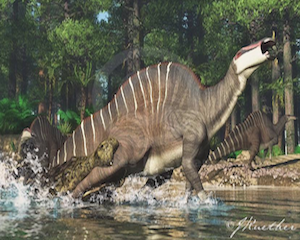 From famous creatures like Tyrannosaurus rex to lesser-known species such as Monolophosaurus, dinosaurs continue to spark the imaginations of children and adults everywhere. Let The Amazing World of Dinosaurs: An Illustrated Journey Through the Mesozoic Era guide you through this incredible time in history.

About the author: James Kuether is a professional artist, whose paintings and photographs hang in galleries and private collections around the globe. He is an amateur fossil hunter and a lifelong dinosaur enthusiast. His paleoart has appeared online and is frequently featured in Prehistoric Times magazine. Previously, he worked as a corporate executive, a consultant for Fortune 500 companies, and an executive coach. James divides his time between his home in Minneapolis, Minnesota, and consulting with nonprofit organizations in Southeast Asia.

Order your copy NOW! For added fun for anyone with an interest in the Mesozoic Era, check out the matching playing cards.