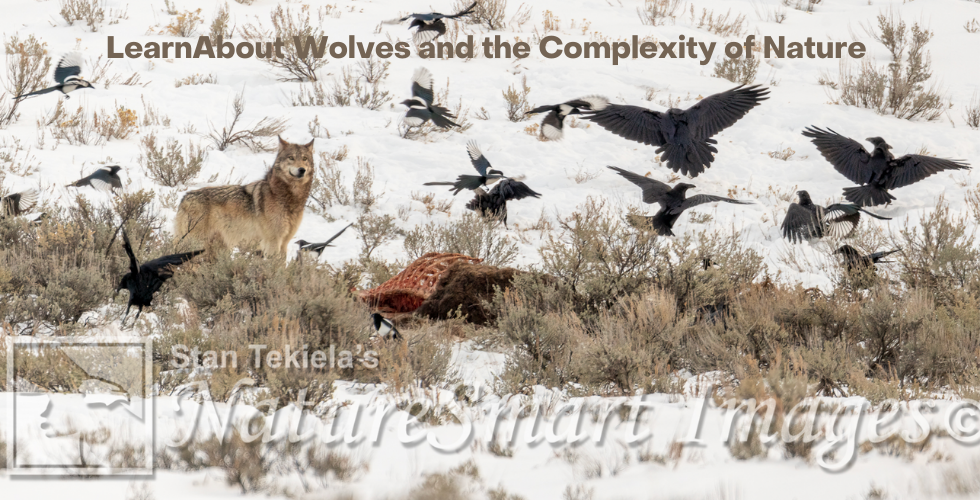 Wolves and the Complexity of Nature

Naturalist and wildlife photographer Stan Tekiela shares with us the complexity of nature when observing a pack of wolves in Yellowstone National Park.

The complexity of nature is often hard to understand and even harder to witness. Sure, we learn about it in school, read about it in a book, or watch it in a TV documentary, but it isn’t until you see it firsthand that you start to fully grasp and appreciate it. I have been fortunate to see it myself and gain a better understanding.

Take, for example, something that happened while I was leading a photographic tour in Yellowstone National Park in the dead of winter. Snow and cold ruled the land. For a month I was moving around the park, entering the inner core that’s only accessible with large trucks with massive wheels and tires to navigate through the deep snow.

Of course, finding and capturing images of wolves is the ultimate goal for my photo tours, but honestly you never can be sure you will even see wolves, let alone capture some images. Even less likely is that you’ll witness the life-and-death struggles that occur in the natural world. But that doesn’t stop us from trying each and every day, even with sub-zero temperatures and snow squalls that dump 3 inches of snow in one hour before the sun comes out.

On one clear and very crisp morning, just before the sun came up, we located a “kill site.” This is where the local pack of wolves was successful at taking down a bison. We were able to climb up a short hill through deep snow to where the wind had blown the snow clear. After setting up our tripods and cameras, we were able to witness the harsh reality of a complex and intact ecosystem.

This pack of wolves had 13 members, and 3 of the wolves were at the bison carcass. The rest were very high up on the mountain in a small clearing, lying in the snow. We could only see them using high-powered binoculars or spotting scopes. But right in front of us were the facts of life. Or, should I say, life and death and the complexity of nature.

Wolves are top predators, usually called apex predators. They live in family units of anywhere from 4 to 30 members. Usually these are blood relatives, so they are brothers and sisters, nieces and nephews. They need to live in family units because a single 80-pound wolf can’t possibly take down and kill a 2,000-pound bison. So they work together as a family to subdue their prey.

However, the more members in the pack, the less food each wolf gets to eat in the end. Studies show that the optimal number of members in a pack of wolves is 6 to 8. This is enough wolves to take down a large animal such as a bison or elk, but not too many mouths to feed, ensuring that each member gets enough to eat.

But the complexity of nature really doesn’t show itself until after a pack of wolves has killed its prey. I have seen this time and time again, and it always amazes me. Within minutes of the kill, the first birds arrive. First to arrive are the ravens. These amazing birds often follow wolf packs around, waiting for something to happen. They are very bold, and the entire family of ravens shows up. It is not unusual to have 20 or more ravens within the first 15 minutes.

More times than not, the wolves take a break and rest directly after taking down their prey. After all, it takes a lot of energy to kill something that is 10 times your size, and you can only use your teeth to kill it. Next are the Black-billed Magpies. These black-and-white birds with long tails sneak in between the ravens and grab what they can. Next are the Bald Eagles. These birds usually push off the ravens and magpies and temporarily take over the carcass. Right after that are the Golden Eagles. They often fight with the Bald Eagles for a place at the table.

Coyotes are never far away. There is no doubt they can smell the kill and literally come running as if someone rang a dinner bell. As they get nearer, they approach slowly and cautiously, looking around and making sure the wolves aren’t too close. When they approach the carcass, they chase off the ravens, magpies, and eagles.

Red Foxes are never too far behind the coyotes. They stay away from the coyotes and bide their time, waiting for a chance to get in there and grab a bite to eat. And they always do make it in, somehow.

Then the wolves return and chase everyone off. They will eat quickly, and each wolf can consume up to 20 pounds of meat in one sitting. It doesn’t take very long, and the only things left are bones and fur. Even the bones and fur are eventually used. Absolutely nothing goes to waste in the natural world.

Most of the time, within 24 to 48 hours, everything is gone, except for a few remaining scraps and a stain of blood in the snow. It is amazing how so many other critters benefit from the work of the wolves.