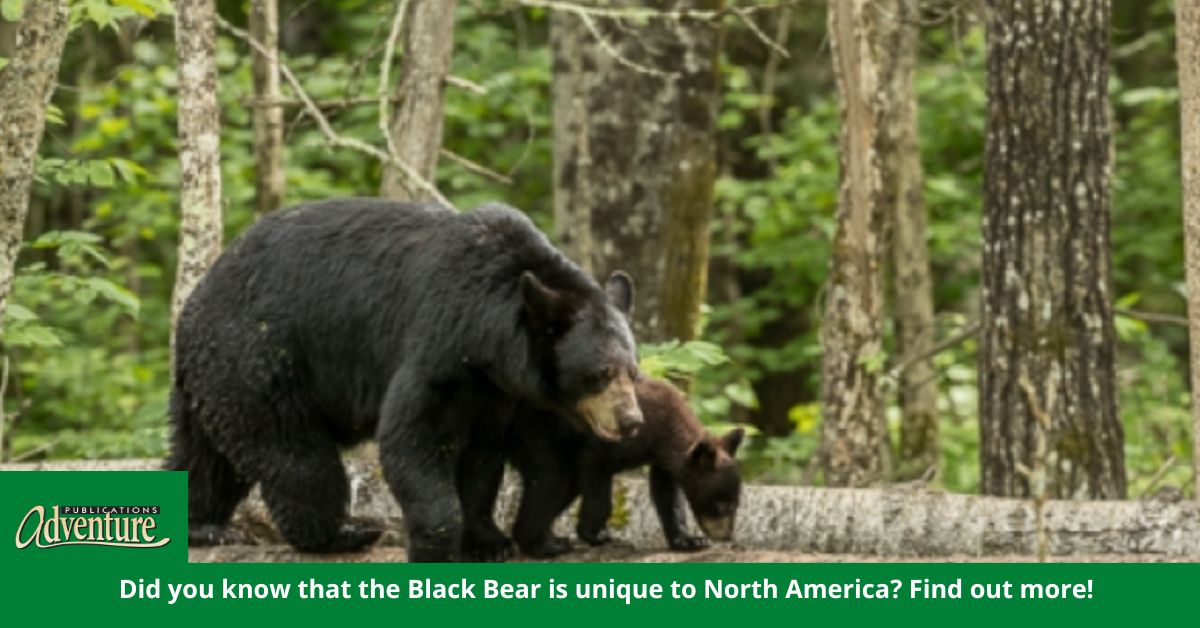 The Black Bear is Unique to North America. Find Out More!

When leading a wildlife photography workshop to capture images of the American Black Bear (Ursus americanus), Stan Tekiela experienced a cuteness overload. Read Stan’s account and discover the fantastic pictures he has to share.

Over three and half days, we saw many mother bears with spring cubs. The term “spring cub” refers to cubs born this past winter that are just now coming out of their dens with their mothers.

We are incredibly fortunate in North America to have three out of the eight bear species that are known worldwide. These are the Polar Bear, Brown Bear, and Black Bear. The Polar Bear occurs in the far northern regions of Canada and Alaska. There are many subspecies of the Brown Bear, including the well-known Kodiak Brown Bear, the largest of the subspecies, and the Grizzly, the smallest.

The Black Bear is unique to North America. This is why they are usually called American Black Bears. This bear is found across Canada and Alaska, reaching down to the Rocky Mountains and extending well into Mexico. They are also found in many central and eastern states and as far south as Florida.

My photography group was thrilled to see so many spring cubs. These tiny, four-legged, furry critters were born just 3 to 4 months ago, during the coldest part of winter (January and February) in a protected den shared with their mother. Amazingly, the cubs were only 8 to 10 ounces (half a pound) at birth. This is a tiny fraction of the size of the mother, who weighs 200 to 300 pounds.

The mother takes care of the small bears for about 17 months. However, when they are 1 1/2 years of age and not yet full grown, the young bears are chased away (dispersed) by the mother in June and July of their first full year. The mating season for bears is in June/July, and the mother can’t have young cubs around when the big male bears show up.

Mother bears give birth to 1 to 6 young (average 2 to 3) every other year after they reach sexual maturity (between ages 3 and 5). After mating, the fertilized eggs do not implant in the female’s womb (uterus). The eggs are fertilized but remain in a suspended state and don’t grow until November when the eggs attach to the uterine wall.

So, technically, the gestation is only about 10 weeks long, which explains why the baby bears are so small at birth. Their eyes are still shut, and they are 100% dependent upon their mother. Their eyes don’t open until they are 30-40 days old; they start to walk at 5 weeks. By the time the cubs follow their mother out of the den, they weigh only about 4-8 pounds. They can run and climb trees to avoid danger, even though they are so small. In fact, young bears spend more time up in trees than they do on the ground.

The cubs continue to nurse on their mother’s milk until their teeth grow and they start to eat solid food. The cubs nurse for around 30 weeks. At 6 months of age, they weigh 40-60 pounds and are eating entirely independently.

On average, Black Bears live around 18 to 20 years, and it’s hard to imagine that these tiny, super-cute baby bears will grow up to be 300-pound males or 200-pound females. The oldest known Black Bear was a female over 39 years old that lived in the forests of northern Minnesota.

Over the course of our workshop, we had several opportunities to see and capture fantastic images of the cubs. Everything in the wild world is new and scary to these tiny cubs, so their natural response is to climb up a tree. Also, if the mother senses any danger, she will huff and grunt, telling the cubs to get up in a tree. When this happened, it allowed us to capture some beautiful images of the natural behaviors of these amazing critters.