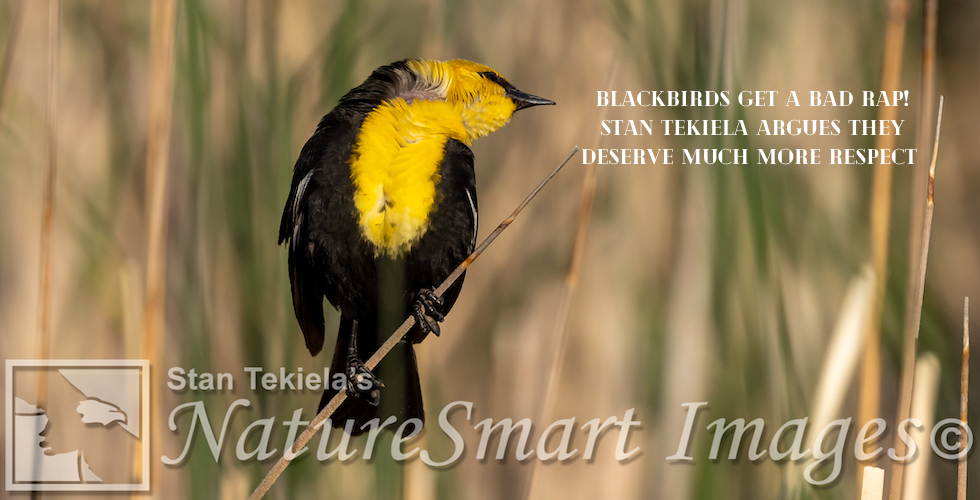 Blackbirds Get a Bad Rap!

Wildlife photographer and naturalist Stan Tekiela argues that blackbirds should get more respect.

Blackbirds always seem to get a bad rap. As the late Rodney Dangerfield was fond of saying, “They get no respect” in the bird world. I, for one, would argue that the blackbirds are an amazing group of birds and that if you knew just how special blackbirds are, you would think they are amazing too.

First of all, I am sure that many of your favorite birds are a type of blackbird, and you don’t even realize it. For example, the Baltimore Oriole is in the blackbird family and so are the Eastern and Western Meadowlarks. These bright and colorful birds are favorites for many people, yet they are blackbirds.

One of my favorite blackbirds is the Yellow-headed Blackbird (Xanthocephalus xanthocephalus). This is a medium- size blackbird that lives in deep water cattail marshes mainly west of the Great Lakes; however, there are some pockets of yellow heads in Michigan, Indiana, and Ohio. Its scientific name is Latin and translates to yellow-head yellow-head, as the Genus name is the same as the species name.

Recently, I was filming a family of Yellow-headed Blackbirds and was thinking about how amazing the male’s courtship display was. These birds nest inside stands of cattails. The male claims a territory each spring. They are semi-colony nesting birds, and their territory is small, about 20 feet by 20 feet. A male often has up to 6 females who will nest within his territory.

The male is an amazing looking bird. A jet-black body is contrasted by a vibrant yellow head and upper chest. Adding to this are large white wing patches. He has a long-pointed black bill and large full tail. Funny thing is, when a bird looks this good, it often doesn’t sound good. In fact, the male Yellow-headed Blackbird sounds like he is choking—and when he does get his call out, it sounds like a rusty door opening. The call is so unusual and loud; every time I hear it, I can’t stop thinking about how strange it sounds.

The male displays by perching near the top of cattails. He often perches for long periods of time before he belts out his raspy call. He slowly moves his head backwards, often contorting his body, so he looks like he is bent over backwards. His head usually goes over his left shoulder and rests on his back, and his body feathers fluff out in all directions. His call sounds like it comes from way deep down in his body and is struggling to get out. Slowly he begins to straighten out with his head, pointing upwards as his call is half emitted from his lungs. The call finishes with him straightening out and returning to a normal position.

Once a female is attracted and they are established as mates, she gets busy constructing a nest. She weaves a large cup-type nest out of old, wet cattail leaves. When the leaves dry, they shrink and tighten up and form a secure nest structure. Often, she weaves a scattering of old cattail leaves arching over the top of the nest to give it a semi-roof-like structure to protect from the sun and also from predators such as Great Blue Herons.

She lays three to five eggs. She will incubate the eggs for just about 2 weeks. When the babies hatch, the male kicks in to help feed the young. Both the male and female collect insects by the beak-full. Between the two adults, they collect thousands of insects to feed their young.

By the end of summer, the yellow-heads gather in huge flocks with males, females, and the young, and they are often joined by families of Red-winged Blackbirds. Because there is safety in numbers, they all migrate together, heading for Texas, Mexico, and Central America. The cattail marshes fall silent at the end of summer. We will have to wait for the Yellow-headed Blackbirds to return in the spring to hear their calls again.

If you enjoyed Stan’s post, you may enjoy one of his amazing nature books: Wild Birds, Backyard Birds: Welcomed Guests at our Gardens and Feeders, and his latest book Bald Eagles: The Ultimate Raptors.