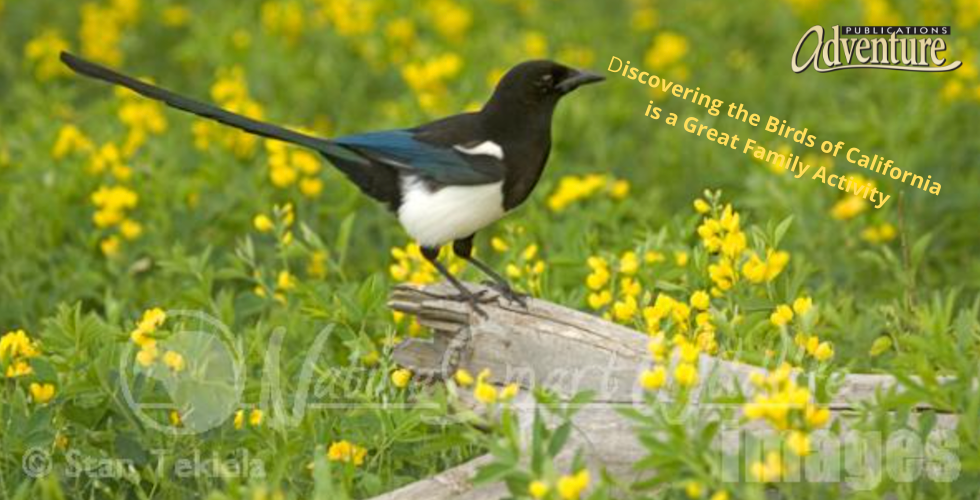 Learning about the Birds of California is a Great Family Activity

In the book each bird gets a beautiful full-color photograph and a full page of neat-to-know information―such as field marks, calls/songs, a range map, and Stan’s cool facts―that make identification a snap.

The Double-crested Cormorant is a large black waterbird with unusual blue eyes, a long snake-like neck, and a large gray bill with a yellow base and hooked tip. The bird usually roosts in large groups in trees near water.

Their calls and songs are more like grunts, pops, and groans—none are pleasant sounds at all!

Double-crested Cormorants swim underwater to catch fish, holding their wings at their sides. They eat small fish and aquatic insects and fly in a large V-shaped formation.

The birds nest on a platform near or over open water. They usually lay 3–4 bluish-white eggs, and parents take turns sitting on the eggs and feeding the young. Their winters are spent in California, Mexico, and Central America.

Stan’s Cool Stuff: This bird’s outer feathers are different from its inner ones; the outer feathers soak up water, but its body feathers don’t. It opens its wings and uses the sun and wind to dry out. “Double-crested” refers to the two unusual crests on its head, but these aren’t often seen.

The Acorn Woodpecker has a black back and wings; a red cap and nape of neck; and a white forehead, cheeks, and eyes. The female is similar but has a smaller bill and less red on the head. Look for them in oak groves with dead trees. The bird is very vocal and gives a nasal call.

Acorn Woodpeckers are fast flyers that love to feast on nuts, fruit, insects, and sap. They nest in the cavity of dead trees, have three to seven white eggs, and Mom and Dad incubate the eggs. The parents both feed the baby woodpeckers. The winter is spent in California.

Stan’s Cool Stuff: Acorn Woodpeckers drill many small holes to store acorns for later use. Each hole is just large enough to hold one acorn. They drill and reuse holes in trees, poles, and even buildings. These birds live in small colonies with up to five males and females and many juveniles.

Ruddy Turnstones have an unusual black-and-white head pattern, black bib, white throat and belly, black-and-rust wings and back, and slightly upturned black bill. The winter plumage has a brown-and-white head and chest pattern. This bird can be found on rocky and sandy beaches where it eats scrap from nets. It also turns over stones on rocky beaches to find food. The bird loves to feast on aquatic insects, fish, snails and other mollusks, crabs and other crustaceans, worms, and bird eggs. When stressed, the bird gives a fast, high-pitched alarm call.

Ruddy Turnstones build ground nests (only Mom builds it) and have three to four speckled olive-colored eggs. Dad and Mom sit on the eggs, but Mom leaves before the babies leave the nest (fledge), so Dad feeds the babies by himself. The bird doesn’t leave California when winter comes.

Stan’s Cool Stuff: This bird is named for its behavior of turning over stones to find food. Also called a Rock Plover, it can be very tolerant of people when it feeds. The male develops a bare spot on his belly (brood patch) to warm the young, something only females normally have.

The Black-billed Magpie is a large black-and-white bird with a very long tail, white belly, black legs, large black bill, and white wing patches that flash in flight. The wings and tail are iridescent green in direct sunlight.

They can be found in open, rural country. Black-billed Magpies are very vocal. Their two primary calls are a harsh chatter and a raspy chatter. They feed on insects, dead carcasses (carrion), fruit, and seeds.

When it is time to nest, Mom and Dad build a modified pendulous nest. They usually welcome five to eight green eggs, which have brown marks. Mom incubates the eggs, while both Mom and Dad feed the babies. The Black-billed Magpie doesn’t migrate and spends all year in California.

Stan’s Cool Stuff: The Magpie is a very intelligent bird that is related to crows and jays. It makes a large dome nest deep within thick shrubs. They often travel in small family flocks with Mom and Dad, brothers, and sisters. They are a good mimic of other animals, including dogs and cats.

The Lazuli Bunting is turquoise-blue with a cinnamon chest, white belly, and two bold white wing bars. It is one of the most beautiful birds of California. In winter the male has a spotty blue head and back. The bird is found in open shrubland between 5,000 and 7,000 feet in elevation. Its song is a high-pitched clear combination of notes repeated every 3 seconds. The birds move in a quick rapid flight from shrub to shrub and feast on insects and seeds.

Mom builds a cup nest and lays three to five pale blue eggs. Mom sits on the eggs, while both Mom and Dad feed the young. When winter comes, they migrate to Mexico and Central America.

Stan’s Cool Stuff: The Lazuli can usually be found near rivers and streams. Lazulis have been expanding their range over the past 100 years. Young males don’t have their own songs until they hear those of older males, and then they modify those tunes to make their own songs.

The Kids’ Guide to Birds of California is a fun, easy-to-use guide for anyone interested in seeing and identifying birds. Fun bonus activities for the whole family, like building a birdhouse and preparing your own bird food, make this the perfect introduction to bird identification for a new generation of young birders. Order your copy here.