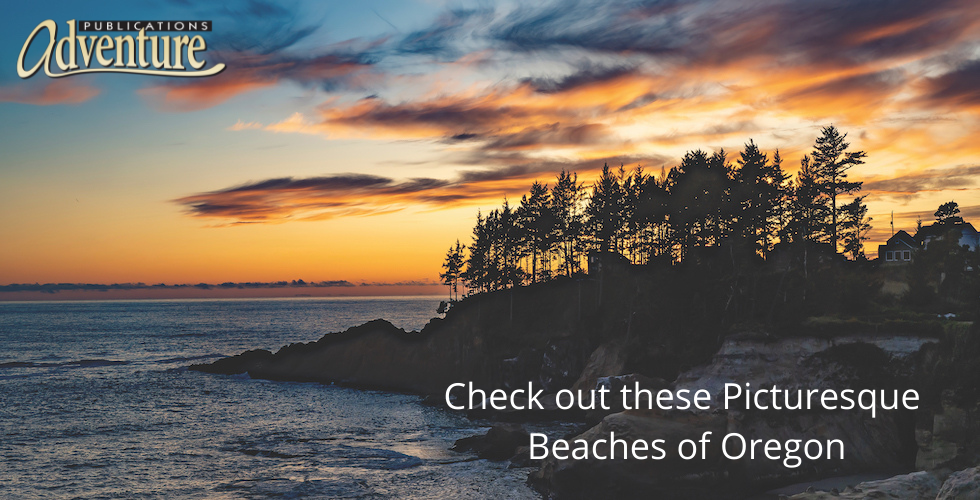 A Look at the Picturesque Beaches of Oregon

In her book Oregon Day Trips by Theme, Stacy McCullough helps readers to discover the state’s unique attractions―beaches, caves, lighthouses, museums, and more. Today we take a look at the picturesque beaches
of Oregon.

From beaches with huge sea stacks looming just offshore to rock-strewn beaches with agates, jade, and other potential finds underfoot, Oregon’s beaches have a lot to offer, both in terms of their scenery and a host of fun things to do.

Cannon Beach is 4 miles long and home to one of the coast’s most famous formations: Haystack Rock, a towering sea stack that’s a common sight on postcards and in magazines, and for good reason. It’s stunning, and it’s also surrounded by tide pools with sea stars and other ocean life that aer fascinating to explore when the tides are right (usually in spring and summer). (These are also protected areas, so please tread gently and only on bare sand or rock.) In addition to the tide pools and their inhabitants, the beach is also a birding hot spot, and it’s famous for its colorful puffins (which nest on top of Haystack Rock) and common murres. Cannon Beach is also a great place to visit in June, as it holds the longest-running sandcastle contest in the Pacific Northwest. Once you’re done playing on the beach, the town is completely walkable and has brewpubs, restaurants, art galleries, and cute shops to keep you busy.

Depoe Bay couldn’t get any closer to the ocean: the town is bordered by the rocky shore and a rough seawall. It’s an easy place to find a great ocean view, but the town proper doesn’t have sandy beaches. Instead, it’s rocky and wild. When the weather gets bumpy, water in the “spouting horn” here shoots into the air for dozens of feet, sometimes drenching observers and even cars on US 101, which cuts through town. (But don’t get too close for a photo, as the ledges can be dangerous and storms have swept people away here.) Depoe Bay is well-known as a whale-watching hot spot. Depoe Bay is also famous for its tiny 6-acre harbor, with signs proclaiming it “The World’s Smallest Harbor.”

A two-stoplight town with access to the Rogue River, old-growth forests, and sandy shores, Gold Beach is a popular destination for beachcombing for agates, jasper, and jade, and its shores also have tide pools, copious driftwood, and plenty of solitude. The beach gets its name because small amounts of gold were discovered here in the 1850s.

If you visit, you may find yourself alone on a beach, mesmerized by the waves and the wind. Better yet, there are plenty of beaches to try out and ready access points throughout town.

Most accessible at low tide, this undeveloped beach is a rockhound’s dream, as it’s well-known for sea glass, agates, and even fossils of snails and shells. The best time to collect such finds is in winter, as the beach is often covered in more sand in summer.

Occasionally, whale bones and other vertebrate fossils are seen on the beach, though collecting those is illegal.

A stroll down Moolack Beach leads to several other notable sights, including Yaquina Head Lighthouse, 2 miles to the south, and Devils Punchbowl State Natural Area, 4 miles to the north, where a pair of collapsed sea caves has created a bowl-like structure where waves swirl and crash when the tides are right. At low tide, you can venture down into the punchbowl itself.

Neskowin Beach is both scenic and eerie. Its long stretch of gorgeous beach is home to the remnants of an ill-fated “ghost forest” that was buried and preserved here, probably by a tsunami or an earthquake, about 2,000 years ago. The forest was uncovered in the late 1990s after a series of severe storms. Today, it can be seen only during low or negative tides. The beach is also home to tide pools, sea stacks, and several hiking options at Neskowin Beach State Recreation Site. Adjacent to the beach, the unincorporated town of Neskowin (population 170) offers lodging, golf, and gorgeous views.

As Europeans settled in Oregon in the middle of the 19th century, Native Americans in the area took exception to their territory being claimed, especially since the law that led to Oregon settlement—the Oregon Donation Land Act—hadn’t been agreed to or signed by any of these Indigenous peoples. This often led to conflict, and one of the landmarks in Port Orford is the site of one such battle. Its Battle Rock Park is the location of a skirmish between the Qua-To-Mah tribe and the initial settlers who took up a defensive position on Battle Rock, a sea stack. The settlers eventually won a bloody battle, and Port Orford was founded as a town in 1852.

Like many towns on the Oregon coast, Port Orford has long ties to the fishing and timber industries, and fishing remains important in town today. Tourism is also a major draw, and there’s a lot to see—from the unique port, which doesn’t actually have any boats sitting in the water (instead, they’re lifted out using a large crane), to hiking options, whale-watching, and, just west of town, Port Orford Heads State Park, home to the Port Orford Lifeboat Station, now a museum that’s open seasonally. In town, you can also visit the historic Hughes House, a restored Victorian home built in 1898. As you might expect, there are also plenty of places where you access the nearby coast.

Rockaway Beach is essentially one long beach town. With 7 miles of sandy beach in all, and many access points (including several with parking), getting here is easy, and there’s a lot to do. You can’t miss the impressive sea stacks—known as the Twin Rocks—if you look at the right angle, you’ll notice one of the rocks has an arch. The beach is also popular for kite flying, whale-watching (during migration season), and kayaking on calm days. In town, there are restaurants, antiques stores, gift shops, and more.

Short Sand Beach is located about 2 miles north of the town of Manzanita. This small, sandy beach (dubbed “Shorty’s” by locals) is surrounded by Smuggler’s Cove. To get to the beach, start from Oswald West State Park’s main lot, then walk through a picturesque forest to reach the beach. This is a popular beach for surfing and boogie boarding, and two hiking trails are accessible from the beach, with several more (including one adventurous 6.5-mile hike) in the vicinity. See the park’s website for a handy brochure with a map.