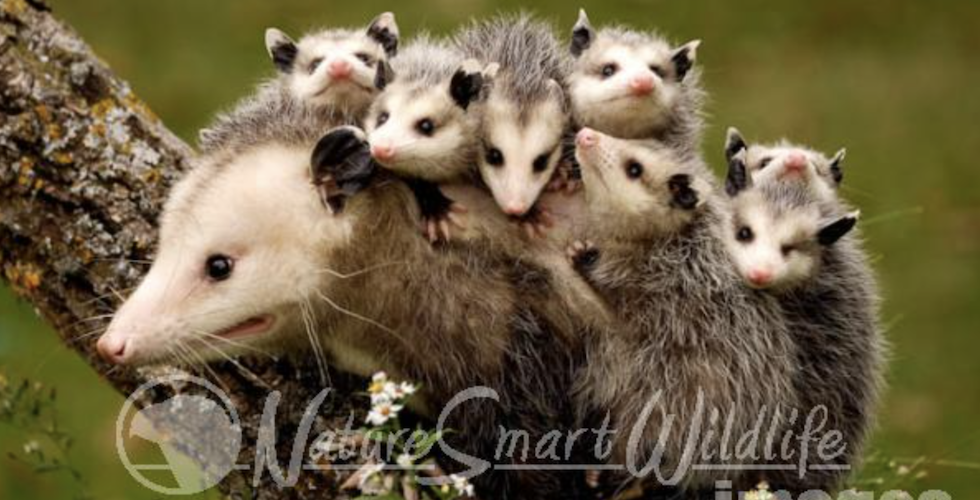 There are so many interesting critters on this planet. Unique and fascinating critters. The Virginia Opossum (Didelphis virginiana) springs to mind as a good example. Stan Tekiela recently photographed a Virginia Opossum, and invites us to take a closer look.

Let’s first start with the name, Opossum. I know there are a lot of people who drop the “O” from the front of the name and just call them Possums. While this might sound quaint or fit in well with a southern drawl, or backwoods lingo, it’s in fact an incorrect shorting of the name because there are upwards of 70 different critters in Australia that are officially called “Possum.”

So, dropping the “O” off the front only serves to confuse our Opossum with a whole bunch of Possums. By the way, the Possum of Australia was named this because it looked like the more familiar Opossum found in the Americas.

The name Opossum was first used by Captain John Smith of the Jamestown colony in Virginia. He used the name “aposum,” which apparently was a word in the Powhatan language spoken by the Algonquian Indians and meaning “white beast” or “white animal.” It’s amazing how many of the names we use today for plants and animals all have their origins in Native American words.

So now we must address the first name “Virginia” in Virginia Opossum. The name Virginia has been attached to the front of many plants and animals. The origins are based in the first English settlers who used the name to honor Queen Elizabeth of England because she was known as the Virgin Queen. It is believed that the English explorer Sir Walter Raleigh suggested the name Virginia around 1584. It was that year that the Queen gave Raleigh permission to colonize “the Virginia region.” In the early 1600s all of North America that was not occupied by the Spanish or French was called “Virginia” in honor of “The Virgin Queen.” So, you guessed it, the state of Virginia and West Virginia were named after the Queen.

To add to the name confusion, there are more than 100 other species of animals called Opossum (with the “O”) in North, Central, and South America. That’s right—the Opossum found in the United States is not that unique. In my travels of Central and South America I have come across and photographed several of these “other” Opossums.

However, our Virginia Opossum is unique in that it’s the only marsupial found in the United States. A marsupial is a type of mammal that reproduces in a very unusual way. After females (called Jills) mate with males (called Jacks), the gestation period is incredibly short, lasting only 12 to 13 days. This is crazy fast compared to other mammals, especially humans. By the way, the young are called Joeys.

So, in less than 2 weeks the young Opossums are born. At this point they are about the size of a jellybean and have no eyes yet. They crawl (or kind of swim) through their mother’s fur to find a pouch located on her stomach. Once inside the pouch they are safe and warm and begin to suckle one of the mother’s nipples for nourishment. Here they will stay for the next 2 to 3 months. They will grow, their eyes will open, and they will grow fur. By the time they leave their mother’s pouch for the first time, they will look like miniature adults.

The young are weaned at 3.5 months and by 4 to 5 months of age the young are on their own. Mothers can have 1 to 3 litters each year. On average they have about 5 to 8 young.

There are many myths and untruths about the Opossum. One example is that males have a forked penis. While this is actually true, it has been said they have this to fit in the female’s nostrils. Gee, I hope I don’t have to explain the birds and bees to anyone reading this column, but common sense would tell you this is not true. The female has a forked reproductive tract and the male’s forked penis helps in proper insemination.

Next time I will take a closer look at the Virginia Opossum and cover some of the many myths about this marvelous creature.