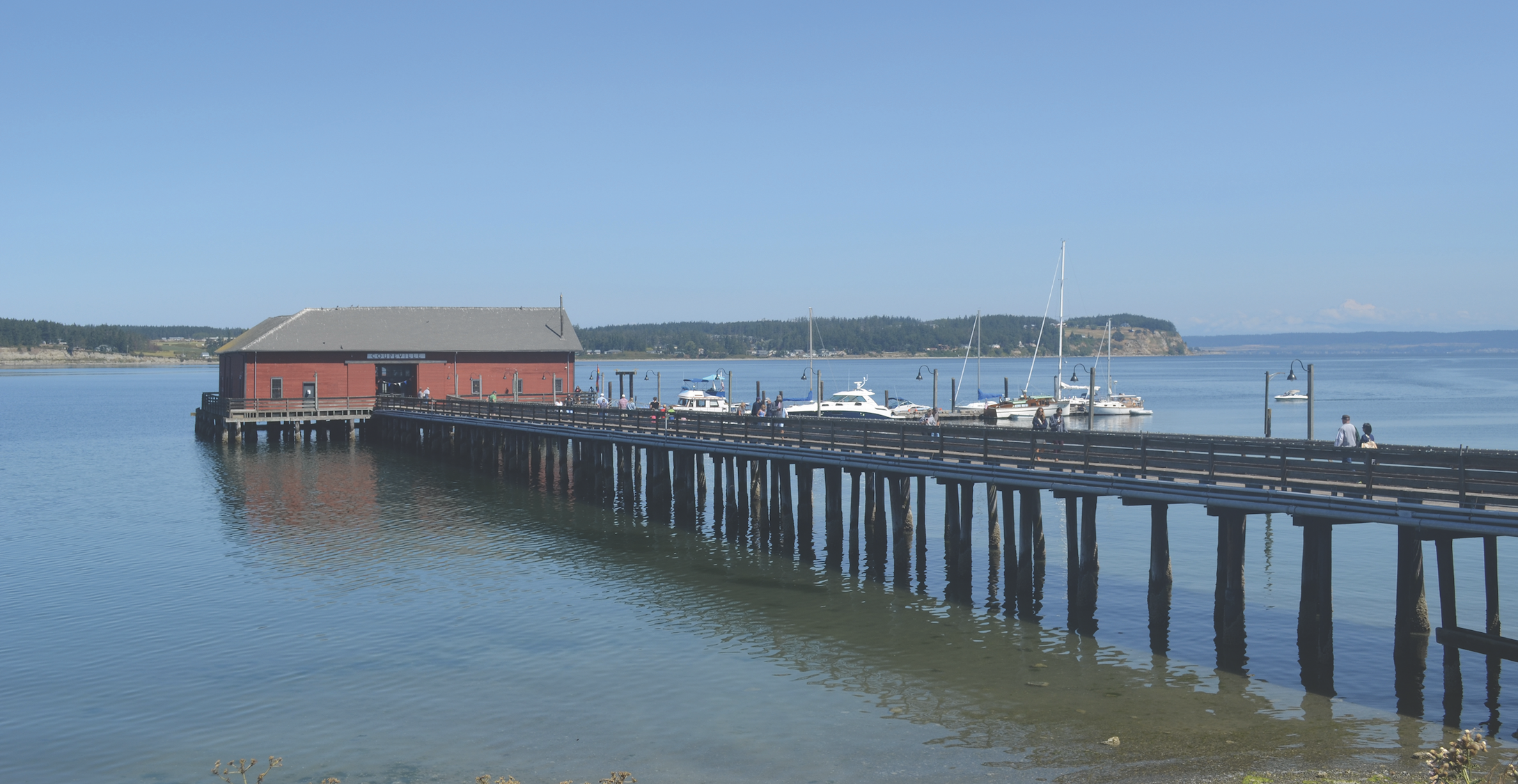 In today’s post, Nicole Hardina, author of Little Washington, tells us all about the history of Coupeville, a paradise of nature, located on Whidbey Island.

Captain George Vancouver’s 1792 exploration of the strait of Juan de Fuca led to the discovery of Deception Pass and then Whidbey Island, which Vancouver named for his navigator, Joseph Whidbey. Prior to the development of Seattle, Coupeville vied for the title of the premier city in the Puget Sound region.

In 1850, Isaac Ebey was the first permanent settler to Whidbey Island. Isaac and his wife, Rebecca, named their 640-acre claim Ebey’s Landing, setting up an adjacent parcel for Isaac’s father, Jacob. In letters to family, Isaac referred to his claim as “a paradise of nature.” Pioneers that followed homesteaded in the parcels around the Ebey clan, so that by 1855, pioneers had completely filled in Ebey’s Landing and Penn Cove.

Captain Thomas Coupe, a shipbuilder and merchant and Coupeville’s eponymous settler, claimed 320 acres of Penn Cove in 1852. Coupe holds the distinction of being the only person to have sailed a fully rigged sailing ship through Deception Pass. Washington’s territorial government created Island County in 1853, and Coupeville soon became the county seat.

Shellfish in Penn Cove provided a staple of the diet for the Native Americans and is still commercially valuable today. However, logging and agriculture drove Coupeville’s early economic success, as did its access to waterways for both transportation and shipping. Much of the land around Coupeville is still owned and farmed by descendants of Coupeville’s original families.

In the early 20th century, the island became an important outpost for national defense. The population increased with Coupeville’s increasing importance, and the town incorporated in 1910 with a population of 310. More than double that number occupied Fort Casey, just a few miles up the road.

The mid-19th century was marked by occasional violent clashes between the Native Americans who first lived on the land and the settlers who made their claims. Clashes in Coupeville didn’t involve the Salish, with whom the settlers generally had good relationships, but with native peoples coming from Vancouver Island to the north. The raiding parties often enslaved captives. In 1857, one such party killed Isaac Ebey. By some accounts, the murder was in retaliation for Ebey having killed one of their people.

In the early days of Coupeville’s settling, the ratio of men to women was nine to one. Asa Mercer, then 25 years old and president of the university of Washington, traveled back to his native Massachusetts to recruit “educated ladies of good moral standing” to follow him back to Washington State because “children need teachers, [and] men need wives.” These women, known as Mercer Girls, filled many roles in the Puget Sound area. Mercer girl Flora Engle served as a historian, teacher, and pastor in Coupeville, and she negotiated with farmers and mill men to build a sidewalk to the church.

From the 1880s to the 1920s, Chinese immigrants settled across Admiralty Inlet from Coupeville. Local farmers employed the Chinese as laborers, but other settlers discriminated against them, fearful that the immigrants would take their jobs. The citizens of Whidbey Island targeted them with exclusion acts, hostility, and violence, and the Chinese population on Ebey’s Prairie gradually declined. From a population of 200, all that remains of their presence is a single grave in Sunnyside Cemetery, that of tenant farmer Ah Soot. Today, Coupeville recognizes the contributions the Chinese immigrants made to the local economy, and to Coupeville’s history in general.

Built atop a rise in the glacial floodplain of Ebey’s Landing, Sunnyside Cemetery captures the island’s history from pre-Columbian contact through today. It’s the final resting place of Susie and Alex Kettle, whose graves lie along the fence line, the only place in the cemetery that accommodated the burial of Native Americans. A blockhouse built as a domestic and defensive structure stands nearby, a reminder of the Indian Wars. Winfield Ebey was the first to be buried in the cemetery, in 1865. A few years later, his sister sold the land to the county for a single dollar. The cemetery has continued to expand as Whidbey Island’s population has grown. In the summer, the Island County Historical Society leads tours of the cemetery. Visitors are welcome year-round.

Coupeville has preserved its history better than have many small towns. A self-guided walking tour boasts 65 places of interest, including the wharf, a livery and stable, the island’s first car dealership, original storefronts, preserved and remodeled 19th-century homes, and blockhouses that served as both homes and protective structures in the years when residents feared attack by Native Americans.

Coupeville also bridges industry and the arts with community events. Penn Cove Shellfish has the largest, oldest mussel farm in the country. Together with the Coupeville Historic waterfront Association, the company sponsors the annual Penn Cove Musselfest, with farm tours, cooking demonstrations, a mussel-eating contest, and more. The festival has brought tourists and locals together in celebration of the northwest staple for more than 30 years. Coupeville also hosts an annual Shakespeare Festival; a water Festival, focused on Native American culture; and numerous art-centric events.

Penn Cove is famous for its oysters. At the end of the dock, visitors will find local eateries and shops. According to Penn Cove Shellfish, “Eating an oyster is like kissing a mermaid.”

State route 20, built in 1967, enabled easy access to all of Whidbey Island and the ferry system. Coupeville is also home to the island’s hospital. Continued growth led to a need for the preservation of Coupeville’s historic importance. The Central Whidbey Island Historic District and Ebey’s Landing National Historic Reserve, both established in the 1970s, formed to protect Coupeville’s heritage while leaving space for continued population and industrial growth.

If you enjoyed this post, sign up for our newsletter now! Find out all about Little Washington here.