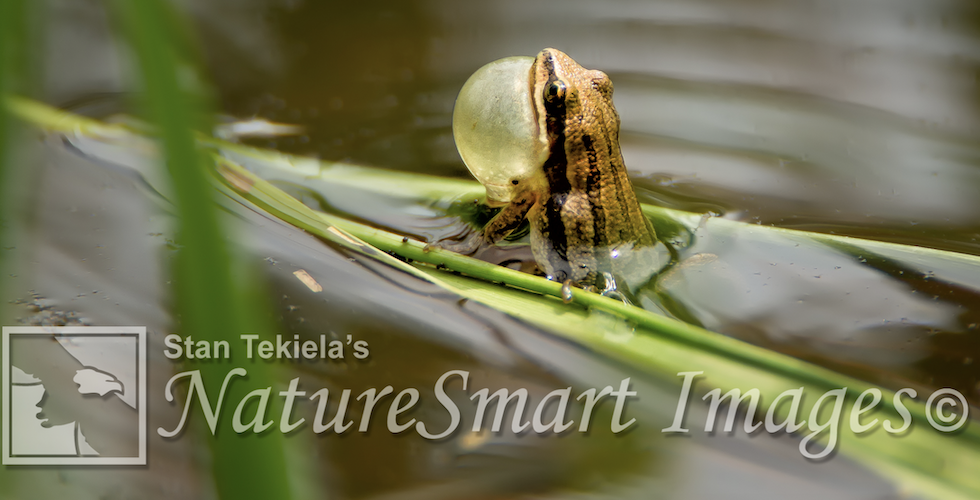 A Closer Look at Chorus Frogs

Stan Tekiela shares with us his knowledge about Chorus Frogs and urges us not to release pets into the wild.

I enjoy cracking my bedroom window at night to let some fresh air in and to cool down the room for sleeping. This means I hear a lot of things going on outside my home. In summer I can hear Barred Owls calling. A couple weeks ago I could hear Tundra Swans migrating (at night) on their way to Alaska and northern Canada. But at this time of year, what I hear most are frogs. Lots of frogs! Calling so loud that it’s hard to believe that all that sound is coming from such tiny animals.

On any given night, where the temperatures is above freezing, the frogs are calling. The first frogs to call in spring are the Western Chorus Frogs (Pseudacris triseriata). There are 18 different kinds or subspecies of Chorus Frogs across North America. So, no matter where you are in this country, chances are you have a type of Chorus Frog. They range from southern Alaska, down the Pacific coast to the southern tip of California. They stretch from the west coast all the way to the Atlantic coast (east).

These frogs are tiny. Adults are only about 1 inch long, slightly larger than your thumbnail. They can be highly variable in color, but often they are tan with a couple dark brown stripes or bands running down the back. The bands can be dark and obvious, or they can be light and hardly noticeable. Most have a dark line running from their snout back through the eye and down the sides.

They are usually found around permanent, shallow bodies of water. So any wetland usually holds a good population of these tiny but loud frogs. Often Chorus Frogs begin calling while there is still snow on the ground or ice on the lakes.

So, what is the reason behind all the loud calling? The males gather in shallow bodies of water to call or advertise to the females. It tells the females where the males are located and that they are available for mating. This is why they are called Chorus Frogs because they gather in groups and sing or call in a large chorus. Only the male frogs give the calls.

Recent studies of Chorus Frog calls have shown that all 18 different types of the frogs fall into one of two categories: “dynamic” or “static.” Our local Chorus Frogs fall into the static group, which means that the individual males don’t have any variability in their calls, but they do have the ability to control the direction of their calls. It has always been theorized that the females could distinguish individual males by their calls. This new study calls into question this theory but shows us there is so much more to know.

The Chorus Frogs with the dynamic calls will switch up their calls, but to our ears we don’t hear any difference. Only a close study of a recording of this call (sonogram) reveals the difference. Presumably the female frogs can hear the difference, but much more investigation is needed.

Worldwide, all amphibians, such as frogs, toads, and salamanders, are on the decline. There are multiple reasons for the decline with a lot attributed to habitat loss, harvesting of frogs for food and for the pet trade, and competition from exotic invasive species. For example, the African Clawed Frog is a common frog in the pet trade. It is sold around the world. In addition, until the late 1970s the African Clawed Frog was used in laboratories for pregnancy testing. This led to the breeding of tens of thousands of these frogs worldwide. After modern pregnancy tests were developed, many of these frogs were released into the wild. Also, many of the pet trade frogs are released by their owners into the wild when they don’t want to care for the “pet” anymore.

On the surface this might seem like a harmless and humane act. BUT it is not! The African Clawed Frog carries a dangerous pathogen called Batrachochytrium dendrobatidis or Bd. The Bd lives on the skin of the African Clawed Frog and doesn’t harm the frog. However, all other frog species in the world that become infected with the Bd will die. The Bd infects the skin of the native frogs and interferes with the frog’s ability to breathe or take in water through their skin. For the Chorus Frog the mortality rate is about 80 percent.

So, I urge you to not release any pet you might own into the wild. The ramifications are always much greater than you might think, mainly because there are things going on in the natural world that we just don’t know or understand.