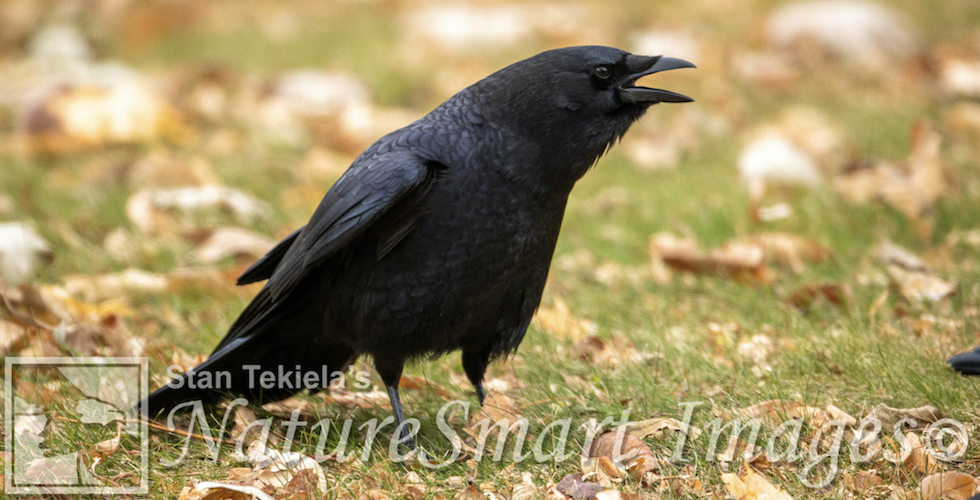 Stan Tekiela Takes a Look at the American Crow

Continuing his look at some of the more common critters that we see every day, Stan Tekiela shares with us interesting facts about the American Crow.

I am often asked what is my favorite bird? This is like being asked to name your favorite child. I think all birds are amazing and super cool. But if I were pressed, I would have to say that the American crow (Corvus brachyrhynchos) is near the top of my list, right next to hummingbirds.

The name “American” crow is a clue as to where this bird is found and at the same time indicates that perhaps there are other crows found around the world. In fact, here in America we have four different kinds of crows and two species of ravens. In addition, there are over 40 different types of crows (Corvids) in the world, including ravens, rooks, and jackdaws.

The American crow is extremely common and is found throughout much of United States and Canada. Chances are, you see crows nearly every day. It is one of the few birds that is entirely black. Not only are all its feathers black, but so are its legs, feet, bill, and eyes. Under direct sunlight, their black feathers look iridescent and give off colors of blue and green. Juveniles have feathers that are not iridescent.

The males and females look identical. There is no good way to tell them apart. However, the males are slightly larger than the females. This usually only helps if two birds are sitting side by side. There are also some behavior differences between the males and females, but these are also very difficult to discern. Presumably the crows don’t have any issues telling the boys from the girls.

Crows are among the smartest of all the birds in the world. Not only have they been known to use tools to obtain food, crows are also well known for playing tricks, communicating detailed information, collecting shiny objects, holding funerals for dead family members, sliding down snow-covered hills, and recognizing individual people by looking at their faces.

Crows have abstract reasoning, which allows them to solve complex problems and made decisions that will lead to a successful outcome. In other words, they are not haphazardly doing things and getting lucky. In one experiment a crow had to procure or make seven different tools in a specific order to get a food treat. This shows clear ability to think things through to the logical end.

A crow’s brain may seem small, but in relationship to the size of the bird, a crow’s brain is comparable to the size of our own. This large brain mass gives them intelligence unmatched by other birds. Their intelligence is compared to that of a 7-year-old human. Your family cat or dog can solve simple problems and be taught tricks, but neither match the intellectual prowess of the crow.

Crows plan for the future by storing food. While squirrels, chipmunks, and others do the same, the crows take it one step further. When a crow caches food for later use, it looks around to see if it’s being watched by other crows. If it sees another crow looking (or another threat to its food stocks), it will pretend to hide its food, then fly off to find a new spot to stash it.

Crows have a complex communication system that allows them to pass along information such as a good food source or a danger that should be avoided. They have been known to pass along information from generation to generation. Another long-term study followed crows that regularly fed at a garbage dump. Many years after the dump was closed and covered, crows continued to return to check and see if the food source had returned.

Crows are omnivores, which means they will take advantage of any available food source from plants to animals. They will eat fruit and nuts along with insects or frogs. They are not above taking bird eggs or baby birds or feeding on roadkill.