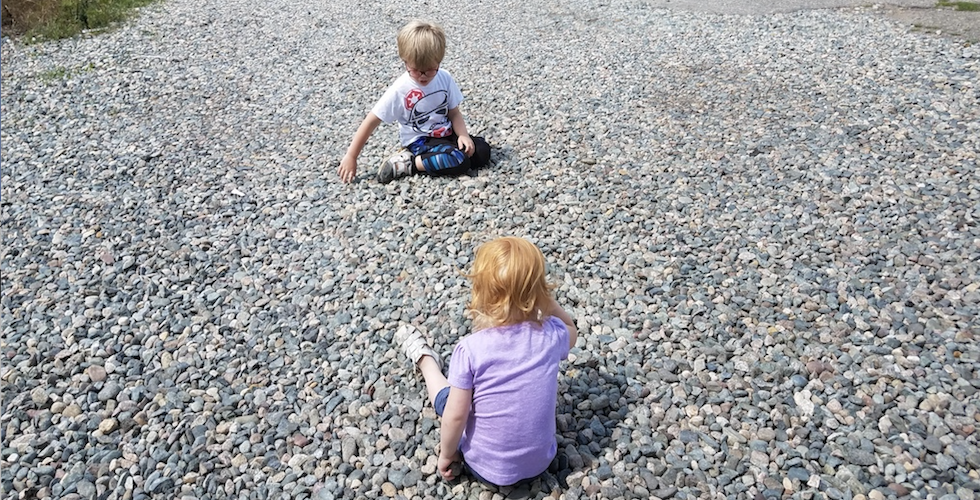 How to Get Your Kids into Rock Collecting and Geology

Kids seem to instinctively love rocks and minerals. Maybe it’s because they are shiny and brightly colored—or perhaps because of the sheer fun of hunting for treasure. And because rocks and minerals are seemingly everywhere, rockhounding is an easy way to introduce kids to geology and the natural world.

Figure Out the Collectibles Near You

Before you take a kid rock collecting, you’ve got to familiarize yourself with your area’s geology. That way, you can set expectations about what you’re likely to find. For example, here in Minnesota, my kids know that if they look hard enough, they’re bound to find Lake Superior agates, Minnesota’s state gemstone. But they also know that when it comes to finding diamonds, gold, or emeralds, they’re probably out of luck. That’s why a good state-specific field guide is so important.

Start with Something Simple and Find a Collecting Site

Once you’ve established what you’re likely to find—and what’s especially sought-after in your area—you need to find a legal collecting site.

After all, rocks and minerals are essentially a limited resource, collectors often want to keep their best sites to themselves, and collecting is strictly off-limits at national parks and the like.

Happily, there are many places where collecting is allowed and even encouraged. Public beaches, whether on the Great Lakes, or on the ocean, are often great places to collect rocks, but always check first to see that collecting is allowed. Land overseen by the Bureau of Land Management is also often open to rock collecting, but check with your local BLM office for details. In addition, pay-to-dig mines and educational sites also offer rockhounding or fossil collecting opportunities. As a general rule, state parks don’t allow collecting, but there are some exceptions, so look on your state’s natural resources management website for details.

Joining your local mineral club is a great option too. Such groups are replete with knowledgeable folks, and better yet, they often hold field trips to proven sites where members can find rocks!

The easiest way to get kids started, though, is to start simple. Once you start looking around, you’ll see rocks nearly everywhere. For example, here in Minnesota, many parks and schoolyard playgrounds are covered with gravel brought here by the glaciers. When you take a close look, as your average 4-year-old is bound to do, you’ll notice that the gravel is replete with quartz, chalcedony, and even Lake Superior agates. The same is true for landscaping rock consisting of Lake Superior gravel, and in it you can find some absolutely lovely agates.

One Important Note: Collecting is not allowed at National Parks, nor is it allowed at many state parks (though there are exceptions, so do your homework ahead of time). Before you begin collecting, always be sure that collecting is allowed where you are, and never collect on private land without permission. Also, never collect artifacts or vertebrate fossils, as they are protected by law.

Build Up a Collection

Pretty soon, your kids will be coming home with rocks in tow. When I pick up my daughter, who is just 4, from daycare, I routinely find her camped out amid the gravel, adding rocks to her plastic rock container (a re-used baby food container) which she pronounces as “rock buh-tay-nay.” She always makes a point of having me look at her newest agate finds. Sometimes you might be surprised at what strikes a kid’s fancy: agates and quartz and granite often make the cut, but sometimes plain-old basalt can be a favorite treasure.

Needless to say, re-used plastic baby food containers are not the ideal storage solution for a burgeoning rock collection. I hereby recommend a simple, efficient option: get them a tacklebox. Tackleboxes are cheap, especially at yard sales, and they make it easy for a kid to organize and protect their collections. A tacklebox is also helpful because it helps you put an upper limit on the size of the collection. If given the choice, my kids would bring every rock home, but that’s bad rock collecting etiquette and unsustainable, and it also means your house would be overrun by rocks.

Get Some Shiny Stuff

Of course, a good rock collection isn’t complete without some specimens that make kids (and parents) marvel. That’s why you should head to your local rock shop or a science museum store.

The folks at rock shops and museums are great repositories of knowledge about the area, and they can often answer questions that have stumped you. And they’ll definitely have interesting rocks and minerals for sale, everything from your regional standards (agates and thomsonite here in Minnesota) to stuff you’re only going to find in far-flung places like Labrador or Morocco. They’ll also have field guides, rockhounding equipment, and even lapidary gear.

If you want to introduce a child to rock collecting, consider picking up Rock Collecting for Kids, one of the many field guides by Dan Lynch, or if you’re in the Midwest, Agate Hunting Made Easy by Jim Magnuson.