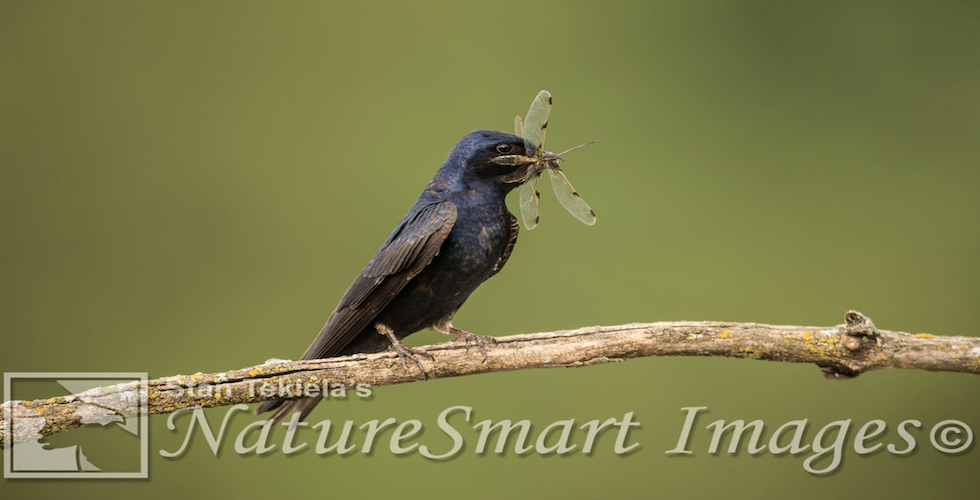 Stan Tekiela, naturalist and wildlife photographer par excellence, has a whole new definition for “streaming TV. ” Here he shares his observations on a nesting Purple Martin with us.

A couple of years ago, I installed a tiny color camera—complete with audio—inside one of my Purple Martin houses. This allows me to observe and study the nesting behavior of our largest swallow species. In addition, the camera also has infrared-emitting diodes that enable me to watch the birds even at night. And the best part is, the birds don’t even know it.

I wired up the TV in my office to “stream” the live video of the interior of the place where the Purple Martins are nesting. And there you have it: my own personal “streaming TV.” It is better than watching Animal Planet or even the BBC. Because what I am watching is live, unedited, and real life.

Observing bird behavior is one of the best ways to study and learn more about a species. The only trick is, you must leave your human emotions behind and observe with an open and objective mind. You can’t just look at some behavior and interpret it according to what you would do or try to apply human logic to it. No, you need to approach it with more of a scientific mind or scientific attitude. Only then will the doors of understanding open.

Purple Martins (Progne subis) is the largest species of swallow in North America. They occur throughout the eastern half of America and have a few isolated populations in parts of Arizona, Oregon, and Washington. They are highly migratory; all the martins in the U.S. make the long trek to Brazil for the winter. Even to this day, we still don’t know exactly where in Brazil they spend the winter.

But one of the most unique behaviors of this bird is how nearly all Purple Martins nest exclusively in human-made nest cavities. Historically, these insect-eating swallows nested in natural cavities in trees. Early on it was reported that Native Americans put up hollowed-out gourds atop poles. Most agree that this wasn’t when the birds switched over from natural to human-made nest cavities. But there are many reports from the late 1700s and early 1800s showing that early settlers put up martin houses on both rural farms and in cities and towns along the east coast.

At some point it became very fashionable to construct and install martin houses. There were huge advertisement campaigns that extolled the virtues of having martins around your home. These ads said that martins would eat thousands of mosquitoes each day. Who wouldn’t like to have a mosquito-eating machine flying around their home? (By the way, it turns out that only 10% of their diet consists of mosquitoes.)

By the mid 1800s people put up thousands of martin houses. They became so fashionable that companies started to manufacture them. Attracting and watching martins became a national obsession. It was so successful that all these new homes changed the behavior of the entire species. By the mid-1900s it was estimated that the entire population of Purple Martins in the eastern half of the country, which for thousands of years had nested in natural tree cavities, switched over to human-made nesting cavities.

I am sure many of the readers of this column can remember their parents or grandparents who had martin houses and can attest to how common it was to put them up. Then something happened. I am not sure if it was World War II, the economy, or just what changed, but the fashion winds started to blow from a different direction. People suddenly stopped putting up martin houses.

Neglected martin houses were taken over by House Sparrows, which at the time were expanding their range across America. Wooden martin houses started to rot and fall apart, and people lost interest in the natural insect controller. The overall population of martins dropped dramatically due to a national housing shortage.

Fast-forward to the present day and not much has changed. Martin numbers are still low, and they are still nesting in man-made nesting cavities. By studying these birds and their behaviors we gain valuable knowledge that will hopefully help us keep this species healthy and strong.