In today’s post, naturalist and wildlife photographer Stan Tekiela talks about the super moth visiting our gardens this time of year.

Late summer brings an amazing insect to flower gardens across the United States. It is the Sphinx Moth, also called the Hawk Moth or Hummingbird Moth. No matter what you call it, this is a large nectar-feeding insect that looks and acts just like a hummingbird.

A unique insect that is found worldwide, there are more than 1,400 different kinds of Sphinx Moth. The vast majority are found in the tropical parts of the world, but a few reach into the northern half of the United States. Most are large in size with large, narrow wings and streamlined bodies. Nearly all feed on nectar from flowers, so they have the ability to hover in flight.

The other evening, I was standing in my perennial flower garden, surrounded by blooms, when I noticed a Sphinx Moth going from flower to flower. In particular, this was a White-lined Sphinx Moth, which has a 2- to 3-inch wing span and hovers at flowers just like a hummingbird. Typically, they come out in the evening when there’s an hour or two of light remaining in the day. I ran to grab a camera and lens to capture this amazing winged beauty.

While I was trying to capture some images of the first Sphinx Moth I saw, I noticed a second one, then a third one. Soon I could see five moths feeding at my flowers—all of them were White-lined Sphinx Moths. You can identify them by the white lines down their wings and the six distinct white stripes on their furry bodies. They also have a large, pink patch on their hindwings (they have four wings, two on each side). Usually you can’t see the pink patch unless you’re photographing and happen to capture the wings in an open position. 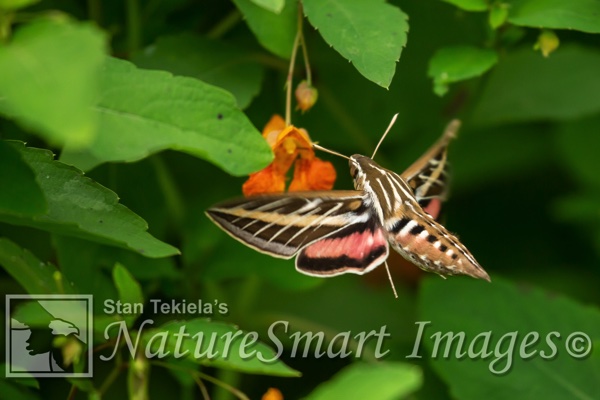 Sphinx Moths use a combination of olfactory and visual senses to find flowers. They can smell (with their antenna) different flower odors and follow the smells to find new patches of flowers. Their eyes are sensitive to blue, green, and ultraviolet light. Many flowers reflect UV light, which turns the flowers into beacons that attract these insects.

When feeding, these moths approach the flower and hover in midair. This hovering capability is unique and has only been known to have evolved in hummingbirds, a few bat species, and these moths. Sphinx Moths are some of the fastest flying insects and are capable of flying over 10 MPH. While standing in my garden and trying to capture some images, several times the moths were zipping around me so fast that I could barely see where they were going.

While hovering at a flower, they unfurl their long, straw-like mouth part called a proboscis. They expertly insert the tip of the proboscis into the corolla (tube) of the flower, which is where the nectar is located, and take a quick sip. They withdraw their mouth part and move on to the next flower to repeat the process.

There are two distinct “flights” of the Sphinx Moth each year. The first occurs in late spring; the second is in late summer. The late-summer flight usually has many more moths. The adults usually don’t survive winter. After mating, the females will lay eggs that hatch into large, green caterpillars with a single horn protruding at the back. This is why they are sometimes called horn-worms. In the caterpillar stage of life, the moth is well known for eating a lot. They feed on the green leaves of many species of plants. When it is ready to change (metamorphosis) into the adult moth, the caterpillar digs a shallow burrow in the ground where it stays for 2 to 3 weeks. When it’s ready to emerge as an adult, it wiggles up through the soil just before transforming into the adult moth and taking flight.

This is an amazing insect species, and I hope you get a chance to see one for yourself.