Today, naturalist and wildlife photographer Stan Tekiela shares with us the fascinating world of the eastern spotted skunk.

Some animals command more attention than others. Large, charismatic critters seem to grab all the headlines and attention, while small, unassuming animals go completely unnoticed. The eastern spotted skunk (Spilogale putorius) is one of those small animals you’ve never seen or perhaps even heard of. 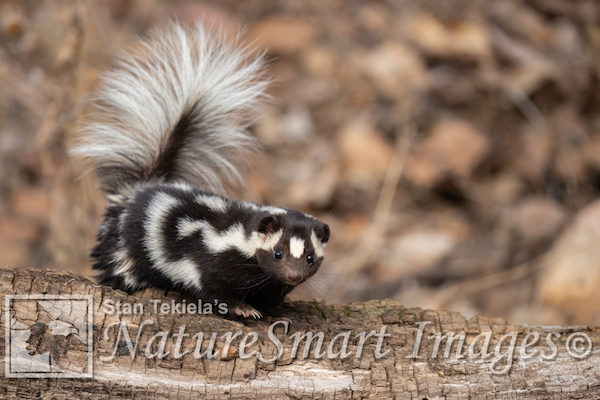 Its common name comes from the four stripes on its back that are broken up into a spotted pattern, giving it a “spotted” appearance. The tail on the spotted skunk is smaller and less fuzzy than that of the striped skunk. 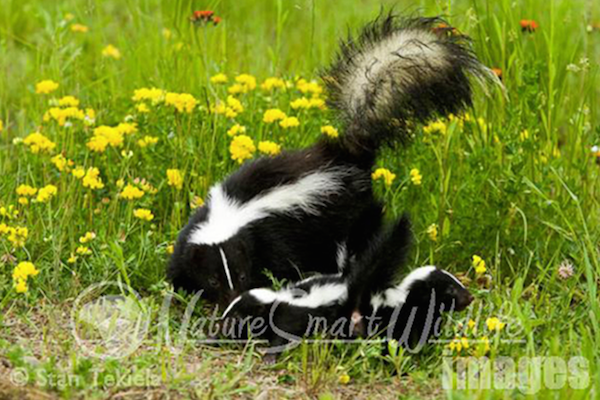 By the 1970s and ’80s, they were all but gone. Some states, such as Wisconsin and Minnesota, were reporting less than 20 individual skunks, despite intensive efforts to locate the little critters. By the 1990s, they were no longer found in most of the Upper Midwest.

Unfortunately, the spotted skunk is declining in population all across the United States—not just in the Upper Midwest. The only place where it might be hanging on today is in Southern Florida. I spend lots of time in that part of Florida, and I can honestly say that I’ve never seen a spotted skunk as roadkill or seen one running around in the wild.

The spotted skunk is a fairly social animal that doesn’t hold a specific territory. Instead, they wonder around from place to place, looking for shelter and something to eat. They move from den site to den site, night after night. Nocturnal, they often go undetected by the average person. They are good at climbing trees and are shy and retreat from people. When threatened by a predator, they do the most amazing thing. They do a handstand with their back legs spread wide like a gymnast. This way, they can both see and aim their bottom at a predator at the same time. Just like other skunks, they give a warning before firing away.

They have incredible accuracy and can hit their target upwards of 10 feet away with an oil that smells very similar to the more familiar striped skunk. This is usually enough to make any predator back off and stay away.

In addition to doing handstands before spraying, the skunks will also stomp their feet on the ground when approached. This should be a clear sign to back off. The stamping can be hear from a good distance. So if you see one of these little guys, look for these warning signs before investigating. 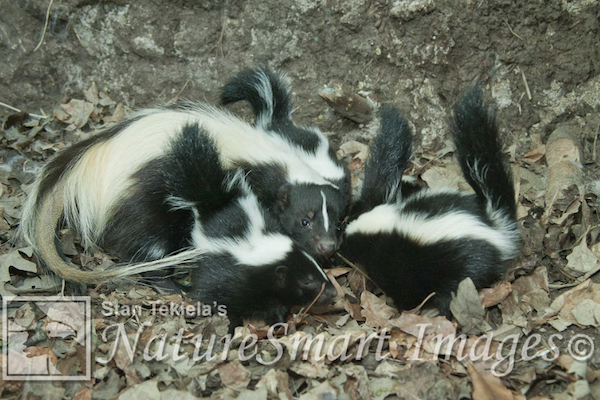 Mothers give birth to in the spring to early summer. They often have upwards of five young. The young need to be 10-12 weeks old before they are fully equipped to defend themselves with the stinky spray.

It would be very special to see some of these little stinkers in the wild. Keep an eye out for them, and contact your local wildlife authorities with your sightings.