The Wood Stork: A Most Amazing Bird

In today’s post, naturalist and wildlife photographer Stan Tekiela tells us more about the wood stork, one of the amazing birds that call Florida home.

I get to see, study, and photograph a lot of interesting birds every year. This past winter, I spent some time in one of my favorite places, especially in winter, southern Florida. There are so many unique and fascinating birds that live in the Sunshine State. One of these special birds is on the federal threated species list: the wood stork (Mycteria Americana).

It seems that everyone is familiar with the Old World Stork—you know, the storks that were said to bring human babies (all wrapped up in blankets) to expecting mothers. The wood stork is related but not the same.

There are 19 species of storks in the world, but the wood stork is the only one in North America. It’s found in the subtropical and tropical regions of the Americas, including Mexico, Central America, and the Caribbean. I’ve studied and photographed the wood stork in Mexico and Central America a number of times over the past 30 years and have always found them compelling.

The name “stork” is a funny word. The word comes from the Old English storc, meaning “stick.” Perhaps this was in reference to their stick-like legs, or maybe it refers to its “ridged” habits. The wood stork gets its name from its habit of nesting near the woods or in a woodland. 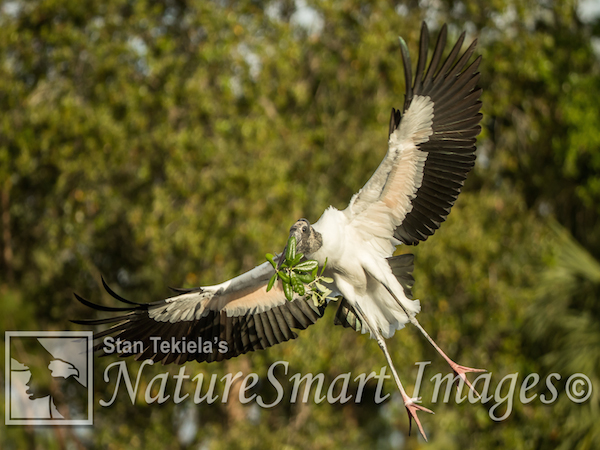 They are colony nesting birds. Dozens of storks will build large stick nests in shrubs and low trees, usually over or very near water. All of the stork nesting colonies that I have seen have been over shallow fresh water, usually in a stand of mangrove or other similar vegetation.

The wood stork is a large wading bird that stands more than 3 feet tall. Most of that is legs. They have a fairly short neck in comparison to their legs and body. The head and neck are bare and scaly. When young, they have a gray head and neck, but, as they age, these areas turn black with small, gray, flaky patches. They have a large and impressive, black, downward-curving bill. The bill is used to snatch up small fish, amphibians, and aquatic insects.

They stalk around shallow wetlands, where the water is only a few inches deep. They put the tip of their bill down into the water, then use their feet to probe around and scare a fish or frog from a hiding spot under the aquatic vegetation, and then snatch up the prey.

The entire stork colony waits to start breeding until water levels start to go down in late winter and early spring. As the water recedes, it will concentrate the fish into the remaining shallow pools, which makes for easy fishing. The increased availability of food is the key to successfully raising a brood of young hungry storks. They have two to four chicks, so they will have a lot of mouths to feed. Unfortunately, in years where fish supplies are low, only about 30 percent of the young storks will survive.

During the breeding season, the temperatures can get rather toasty under the tropical sun in a wood stork nest. Storks have an interesting method of staying cool by defecating down their own legs and feet. This is called urohidrosis. The feces is rather liquidly and easily runs down and coats their extremities. The result is evaporation, which provides a lot of cooling for the bird (thermoregulation).

During these hot periods, the parents will also stand above the chicks in the nest and spread their large wings, providing some much-needed shade to the chicks.

Recently, I spent many days at a breeding colony, watching the adult wood storks bringing in sprigs of branches with green leaves still attached to build and line their nests. Even though the females were already sitting on eggs, the males were still remodeling and adding to the nests. This is the level of dedication the adult storks have to reproduction. What an amazingly cool bird.

If  you enjoyed Stan’s post, you may consider one of his amazing nature books: Majestic Eagles; The Lives of Wolves, Coyotes, and Foxes; or Backyard Birds: Welcomed Guests at our Gardens and Feeders. Young readers will delight in his award-winning children’s books, such as Whose Butt?, Critter Litter, and his latest,  Jump, Little Wood Ducks.