Naturalist and wildlife photographer Stan Tekiela shares with us the astonishing behavior of the American Dipper. Find out more about this aquatic songbird.

At first look, the American Dipper might not seem like a very interesting bird. It’s a stocky, dull gray bird with a short black bill. While it may appear unimpressive, just watch it a few minutes longer and you will appreciate this astonishing little bird. 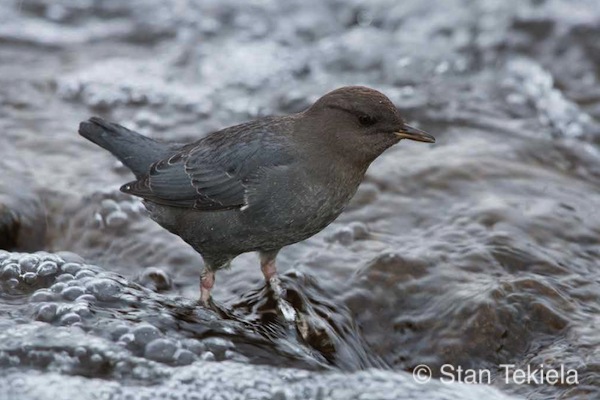 The dipper is North America’s only aquatic songbird. Acting more like a waterbird, it lives next to fast-running mountain streams in western states and northward through British Columbia into Alaska. It sings a melodious song, but it’s best known for diving and dipping into swift, cold, clear-water streams in search of aquatic insects, including the larvae of mayflies, caddis flies, dragonflies, and damselflies. It also eats worms, snails, small fish, and fish eggs.

Amazingly, this songbird plunges headfirst into a rapid, frigid stream and completely submerges. Using its wings as if flying underwater, it pushes along with its feet, fighting the current to snatch a meal off the bottom. Returning to the water’s edge to eat, it often will bang the prey repeatedly against a rock to kill it before swallowing the food. Then it goes back and dives into the water to search for the next morsel. 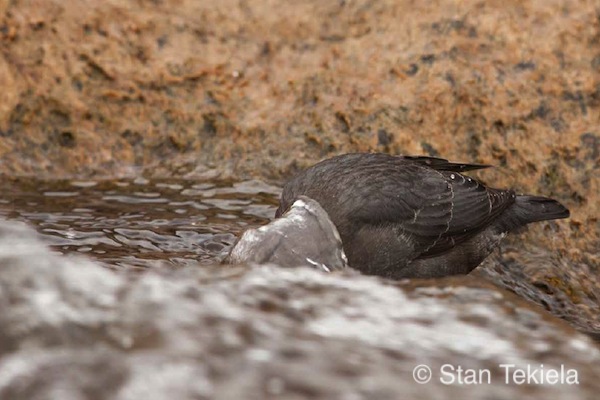 Flying low across the water’s surface, the dipper moves from one hunting location to another. Standing alongside a stream, this bird has a distinctive habit of bobbing or pumping its body up and down. Many mistakenly liken the action to deep knee bends, but in reality the dipper is flexing its ankle joint to achieve this movement.

The American Dipper has a delightfully sweet song, but it can barely be heard over the roar of rushing water. There are white feathers on its eyelids, which make it look like the bird is flashing white with each blink. Combine the blinking with the bobbing up and down and the wonderful song, and it’s a sight to be seen.

As if that weren’t enough, the dipper also constructs a fantastic domed nest that is larger than a soccer ball, with an entrance low on one side. Usually made with mosses, other green plants, and rootlets, the location is often under a waterfall or next to an especially splashy part of the stream, which keeps the nesting material damp. 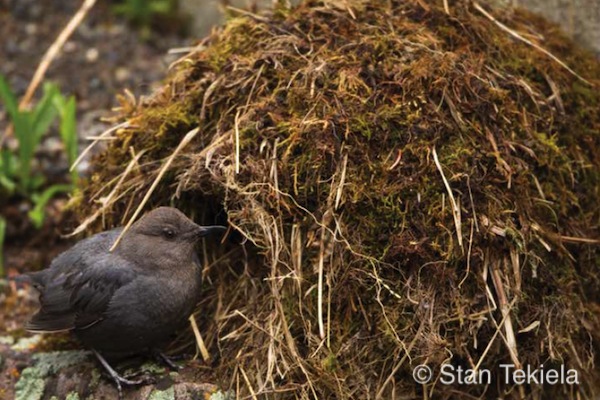 The American Dipper is one of five dipper species worldwide, and it’s the only one in the United States. It is also known as the Water Ouzel, which means “water blackbird.” The common name “Dipper” was given because the bird is constantly bobbing its body up and down while it stands or walks. Some say the name refers to its unique head-dipping action to find food.

If you enjoy birds, you may also consider this post about baby birds or some of Stan’s other amazing nature books: