About Hornets, Wasps, and Yellowjackets

Tom Anderson, author of Things that Bite: The Truth About Critters that Scare People, shares with us truth and myth about hornets, wasps, and yellowjackets.

Like honey bees and bumblebees, these thin-waisted stingers live in social colonies made up of workers. Hornets, wasps, and yellowjackets, in particular, are more aggressive than honey bees. 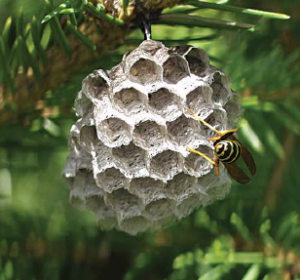 Colonies of hornets, wasps, and yellowjackets remain active for only one summer, after which the fertilized queens fly away to start more colonies. Other colony members die at the end of the summer, and the nest is not reused. Fertilized queens winter in protected places such as hollow logs, stumps, under bark, in leaf litter, abandoned animal dens, and manmade structures. They emerge in the warm days of late April and early May to select a nest site and build a small paper nest in which to lay their eggs.

After her first brood hatches, a queen feeds the young larvae for 18–20 days. These young will eventually pupate and emerge around mid-June as the colony’s first group of workers. Infertile females’ jobs include foraging for food, defending the nest, and caring for the queen’s subsequent hatches of larvae. Each cell in the nest may be used for two or three batches of broods.

The larvae’s primary diet are protein-rich foods such as insects, meat, and fish. Adults are particularly fond of fruits, flower nectar, and tree sap, which provide ample doses of sugars and carbohydrates.

The queen stays with her nest throughout the summer, laying eggs. Eventually, she might build an empire of several thousand workers. In late August and early September, she creates cells where future queens and males are produced. They are cared for and fed by the sterile workers before leaving the colony in the fall for a mating flight. After mating, the males die; fertilized queens look for protected sites to spend the winter. 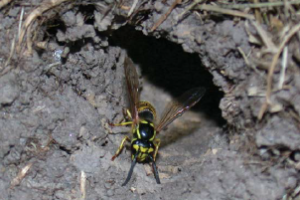 Thanks to Hornets, Wasps, and Yellowjackets 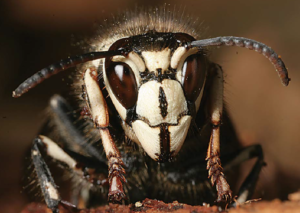 MYTH: All bees and wasps sting.

Many wasps are non-stinging, and most do not sting humans. Only female wasps are capable of inflicting a sting. Males are rarely seen because their function is to mate during the fall mating flight. And just because a wasp or a hornet looks scary doesn’t mean it will sting you. The ichneumon wasp has a long ovipositor (a tube for depositing eggs) at the end of its body, and this tube is spooky-looking and looks like a stinger. But it’s not. The wasp drills the ovipositor into soft or rotting wood and lays its eggs.

MYTH: Just because an insect looks like a wasp or hornet, it is one.

Actually, many harmless insects look a lot like wasps or hornets. Many insect species mimic the colors of their feistier neighbors in order to protect themselves. If an insect looks like a yellowjacket, wasp, or hornet, birds and other predators think twice before attacking, as the predators see the bright colors and sometimes shy away. But many innocent insects are often confused for wasps or hornets and unfairly swatted.