The Amazing World of the Snail Kite

Naturalist and photographer Stan Tekiela helps us to discover the world of the amazing snail kite.

Species specialists have a hard time living anywhere outside of their specific habitat or feeding upon anything other than what they have evolved to eat. As their environments change or food supply becomes scarce, these species don’t do very well and populations tend to drop.

On my recent trip to southwest Florida, I had the great fortune to spend some quality time with a snail kite (Rostrhamus sociabilis). The snail kite is a bird of prey (raptor) that lives in southern Florida, parts of Mexico, the Caribbean, and much of South America. It is a very species-specific bird and considered an endangered species in southern Florida, where there are only about 400 breeding pairs.

It is a gregarious bird that lives in freshwater wetlands and feeds almost exclusively on apple snails. They have a long, curved bill that is perfect to slip inside the shell of the apple snail to cut the soft body free. But this uniquely shaped bill also means they have trouble eating other things. Once, about 10 years ago, I was in a boat photographing snail kites near the Everglades and found a snail kite that was eating a small turtle. This is highly unusual, but I suppose the snail and the turtle are similar enough for the kite to take advantage of the food source. Perhaps this is showing some adaptation on the part of the kite to expand its food base. 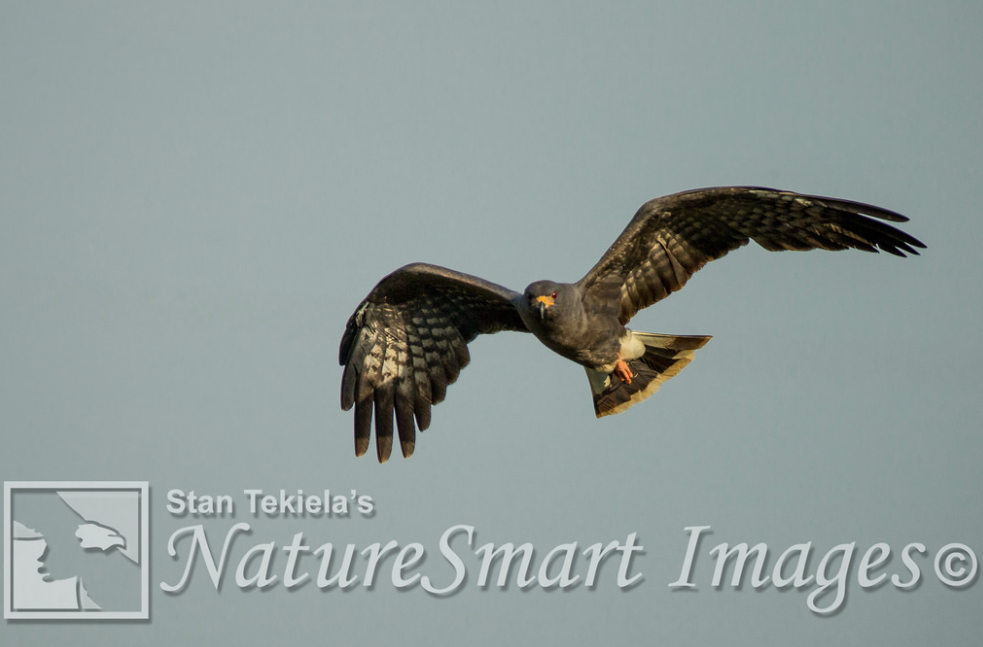 One morning I was checking on a family of sandhill cranes when I came across a male snail kite that was hunting for apple snails along a freshwater channel. He was perched in a small tree. So I grabbed my photo gear and set up nearby, waiting to see what he would do.

It didn’t take long before he launched off the tree. Fortunately, I was pre-focused; when he started to fly off, I captured a series of stunning images that highlighted the beauty of this species-specific raptor.

The snail kite flew slowly down over the shallow channel, looking down into the water. When he spotted a snail, he quickly turned in midair and swooped down to the water’s surface. While pumping his wings hard, he reached into the water with his long feet and toes and plucked out two snails at the same time. Once the snails were secured, a few strong wing beats lifted the kite up and away.

He wasted no time in flying right to one of his favorite feeding perches. Once the bird landed, it took only a few swipes of his bill inside the shells of the snails before he had extracted all of the meat within. The shells were immediately dropped, while the soft bodies of the snails were torn up and eaten bite by bite. 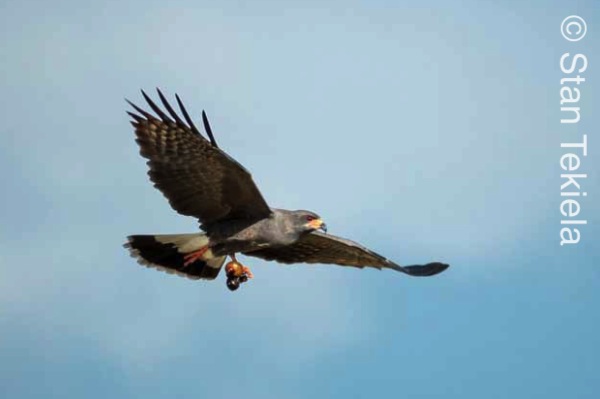 Once the kite left the perch, I walked over to examine the discarded shells beneath. What I found was a pile of old, sun-bleached shells along with several new, brightly colored shells. Some snail shells were small and some large, but all were very interesting and told the history of what this bird was hunting and eating.

I find these species-specific birds most fascinating. They seem to be balancing on knives edges in terms of their dependency on a very specific habitat and food. Of course, we people are the ones who are changing the habitats by draining wetlands, digging ditches (draining water away from wetlands), installing drain tile, filling in wetlands for housing, and so much more. These kinds of actions take a toll on species-specific critters like the amazing snail kite.