In Wyoming alone there have been more than 400 different kinds of birds recorded throughout the years. This is an impressive number of species for one state! These bird sightings were diligently recorded by hundreds of bird-watchers and have become part of the official state record. In his book Birds of Wyoming Field Guide, Stan Tekiela describes 134 of the most common and easily seen birds of Wyoming. In this post we share with you five of our favorite Wyoming birds.

Ospreys are in a family all their own. This is the only raptor that plunges into water feet first to catch fish. It can hover for a few seconds before diving, and it carries fish in a head-first position for better aerodynamics. In flight, wings angle backward. The Osprey nests on man-made towers and in tall dead trees. Recent studies show that Ospreys mate for a long time, some perhaps for life. Once almost extinct, they’re now doing well. They build nests in many places in the parks, near large lakes and rivers, especially at Jackson Lake Dam. 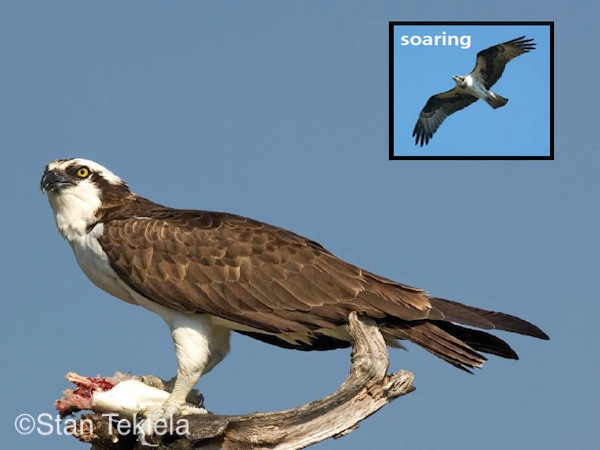 Common at ponds and lakes in summer, the Tree Swallow can be attracted to your yard with a nest box. Tree Swallows compete with bluebirds for cavities and nest boxes and will travel great distances to find dropped feathers to line their grass nests. Occasionally seen playing or chasing after dropped feathers, this bird is most often seen flying back and forth across fields and water, feeding on insects. Good birds to have around because they eat many nuisance insects, Tree Swallows gather in large flocks during migration and are common in both national parks, especially around Yellowstone Lake. 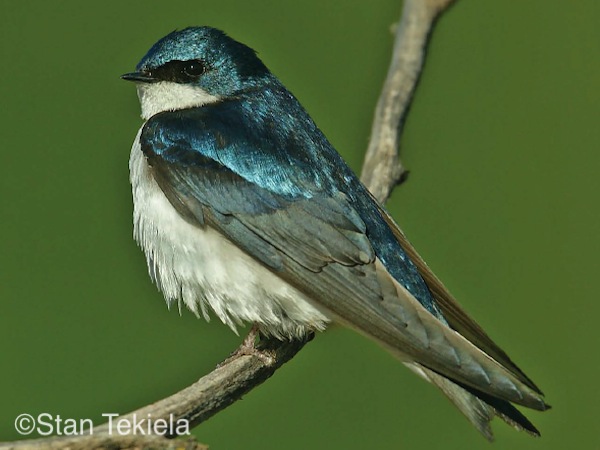 The Western Blue Bird is not as common as the Mountain Bluebird. It can be found in a variety of habitats, from agricultural land to clear-cuts. These birds require cavities for nesting and compete with starlings for nest cavities. Like Mountain Bluebirds, Western Blue Birds use nest boxes, which are responsible for the stable populations. The Western Blue Bird populations dropped during the mid-1900s but recovered due to the efforts of concerned people who put up nest boxes, providing much-needed habitats for nesting. A courting male will fly in front of the female, spread his wings and tail, and perch next to her. The bird often goes in and out of its nest box or cavity as if to say, “Look inside.” The male may offer food to the female to establish a pair bond. Look for the Western Blue Bird near Roosevelt Lodge and along the drive from Roosevelt to Yellowstone’s Northeast Entrance. 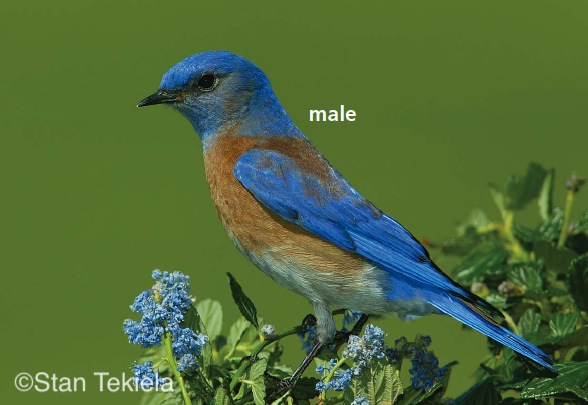 The Clark’s Nutcracker is a high country bird in coniferous forests in the state. Its diet varies, but it relies heavily on piñon seeds, often caching large quantities to eat later or to feed to its young. The bird uses the large pouch in its throat (sublingual pouch) to transport seeds. Studies show that these birds can carry up to 100 seeds at a time. The Clark’s Nutcracker nests early in the year, often while snow still covers the ground, relying on stored foods. The bird is a “Lewis and Clark” bird, first recorded in Idaho by William Clark in 1805, hence its name. It is seen at high elevation roadside pull-outs, such as Dunraven Pass, Sylvan Pass, as well as around the Lewis Canyon rim.

The Blue Heron is one of the most common herons, often heard barking like a dog when startled. The bird stalks small fish in shallow water and strikes at mice, squirrels, and just about anything else it may come across. The Blue Heron holds its neck in an S shape in flight, with its long legs trailing straight out behind, and holds its wings in a cupped fashion. The birds nest in treetops near or over open water, but did you know that they nest in colonies of up to 100 birds? 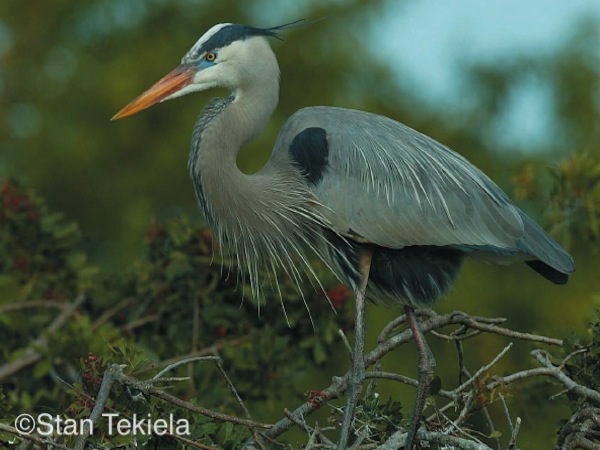 The Birds of Wyoming Field Guide is for those who want to identify the common birds found in Wyoming, including the Yellowstone and Grand Teton National Parks. You can order your copy here.