In this week’s column, Stan Tekiela shares with us the mating ritual of Prairie Chickens. 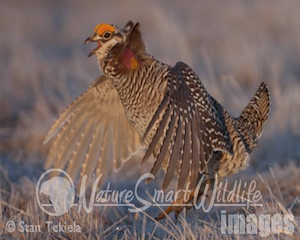 I’ve been spending a lot of time this spring filming some of the most strange and unusual mating rituals of the bird world. First I spent several evenings with the timber doodle, better known as the Woodcock. How this shorebird of the woodlands started its elaborate late evening sky dance no one will ever know. Now I am photographing Prairie Chickens on the vast windswept prairie. The elaborate dancing and displaying of these crazy birds is a sight to behold. Honestly, the drive of these birds just to reproduce each spring is astonishing.

Before daybreak, in complete darkness, I pulled up my truck to the side of a minimum maintenance road. I could barely open my truck door because the wind was blowing so hard. With each push of the door it came swinging back at me much faster. The winds were sustained well over 30 mph and the temperature was only 22 degrees. This was not a good day for photography. 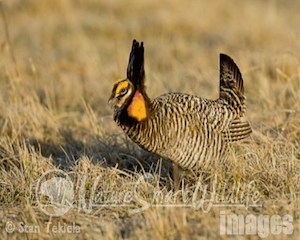 I had to walk nearly a mile against the wind, carrying all that I needed for the next 4 hours of photography—nearly 30 pounds of cameras, tripods, a blind, and something to eat and drink. Walking in the dark can be disorienting. You can’t see the normal landmarks that would guide you across a featureless prairie. Eventually I arrived at the location and began to set up. Within minutes I am inside the blind hoping I won’t be blown over by the stronger wind gusts.

Waiting for the sun to come up is never an issue, unless you are trying to keep everything from blowing away. With this kind of crazy wind, a guy doubts that the birds will show up to display. However, shortly after there was enough light to illuminate the landscape, I was fortunate enough to have more than 20 male Greater Prairie Chickens (Tympanuchus cupido) arrive and begin to display. I find the translation of the Genus and species name of this bird hilarious. The first name Tympanuchus translates from the Greek for “a drum” or “a drummer.” The second name or species name cupido translates from the Latin as “physical desire or love.” So together, this bird is called the Love Drummer. 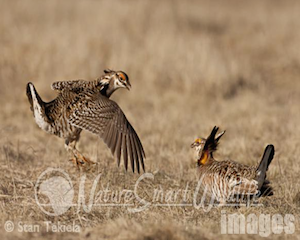 I would never say the Prairie Chicken is a drummer. But I suppose the bright orange air sacs located on the sides of its neck could be construed as a type of drum. During the male’s courtship dance, he leans forward, spreads his tail like a turkey, droops his wings, lifts a set of 10 feathers called a pinnae, stands straight up on its legs, and, lastly, inflates a yellow to orange air sac on its neck. Then he makes a sound that resonates in the air sacs and sounds like a low-pitched booming. This is how these birds got their other common name, “boomers.”

Each spring the males will gather on a small spot in the prairie called a lek. The males will fight each other to establish a pecking order. The strongest males are near the center of the dancing grounds. Occasionally Prairie Chickens will display and dance about, but most of the time they are fighting with other males. They face each other and suddenly leap towards each other, kicking with their feet or grabbing the chest feathers of the opponent with their beak. Fights last just seconds before the birds break it off and walk away. 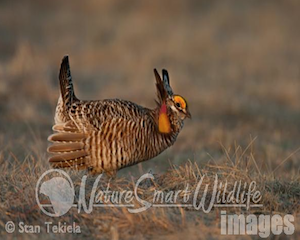 However, when a female shows up on the lek, all the males start to display and give their booming sound. While I was photographing, two females entered the arena. They slowly moved towards the center of the lek, while each male displayed and tried to walk in front of them. The females hunkered down to watch the show. Apparently, they were judging the males based on their feathers and displaying.

Even though it was well below freezing and the north wind was blowing like a hurricane, the mating rituals of spring continued. I was able to capture some great behaviors of the males showing off for the females. About three hours later, the males were tired and needed to rest and find something to eat. All of a sudden, as if someone said something, all the males took off flying for the distant horizon. Now I just have to pack up and fight the wind all the way back to my truck. Until next time…