In this week’s column, Stan Tekiela discusses the nesting habits of the Great Blue Heron. 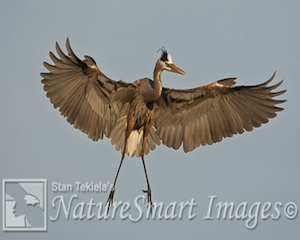 There’s a large and very common bird that people see on a regular basis, but rarely does anyone see it nesting. The bird is the Great Blue Heron (Ardea herodias), the largest and  tallest of the North American herons. The name is often shorted to just “GBH.” It is found in every state in the nation in good numbers. Some regions see this long-legged bird all year long, while others see them in warmer weather only.

This bird is a great example of how common names often don’t make any sense. Let’s break down the name. Great refers to being the largest of its kind. I can agree with that part of the name. What I have problems with is the “blue” part of the name. I have photographed this bird in all stages of its life and in more parts of the country than I can count, and it never looks blue to me at all. It should be called the Great Gray Heron because most of the bird is gray not blue. But enough of my rant about bad common names.

Standing 4 feet tall, most of this height comes from the spindly long legs and snakelike neck. It holds its long neck in a tight S shape while flying, so you often don’t notice the neck length. However, its long, stick-like legs stretch out behind, making it fairly easy to identify this bird in flight. 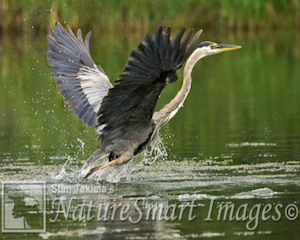 Like many but not all herons, the Great Blue Heron stalks shallow fresh- and saltwater habitats, looking for small fish. They are comfortable hunting in rivers, creeks, lakes, ponds, and even the ocean shore. They use their eyesight to spot their prey. They may move incredibly slowly, but, when they strike, the head and beak move like lightning.

They are well known as a top predator for fish, but not many know these birds also hunt away from water and will stalk gophers, mice, shrews, and other small rodents in fields and prairies. Last winter I watched and photographed several Great Blue Herons hunting gophers in agricultural fields in Northern California. These birds are also well known for taking small birds right out of the nests. They stalk around cattail marshes looking for nesting birds and will snatch up any baby bird they find. Great Blues also hunt for chipmunks, snakes, and just about anything else they can stab with their long, pointed, stiletto bill.

Great Blues hunt both day and night, thanks to an abundance of rods in their eyes that allow them to have excellent vision in very low lighting. 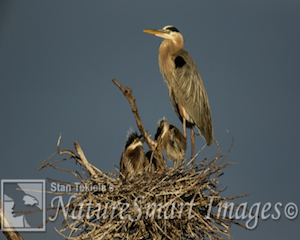 As common as these birds can be, not many people have seen them nesting. That is because they nest in colonies called heronries. They build large nests made of sticks in dead or living trees. Nests are usually 3 to 4 feet in diameter. Oftentimes there will be upwards of five nests in one tree, depending on how many branches are available to hold
the nests.

The heronries are spread wide and far and often on islands in large lakes or rivers. This is why many people don’t see the birds nesting. A good-size heronry will have more than 100 nests. Often other birds, such as Great Egrets and Double-crested Cormorants, also nest in these colonies, changing the name to a rookery instead of just a heronry, due to the mixed residents. 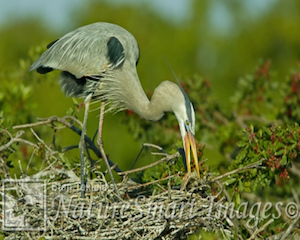 Great Blue Herons will return to the same rookery for many decades, often sprucing up the nest at the beginning of the season. This means the nests get larger and larger with each season. If you get a chance to see a rookery, it’s worth the time. Until next time…