In today’s post, Stan Tekiela shares with us his encounter with an American beaver. 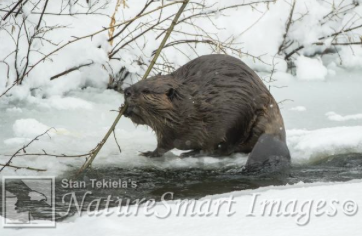 On my recent Wyoming mountain adventure to study and photograph Bighorn Sheep, one afternoon I was thrilled to find an American Beaver (Castor canadensis) along a frozen mountain stream. The temperature was below freezing, there was no wind, and a light snow was falling. It was perfect winter weather, but that normally means that beavers are deep in their dens waiting for spring. However, this brave beaver was out and about, despite the cold and snow.

Beavers that live in cold climates, where the water freezes solid, don’t hibernate. They remain awake all winter, but they are forced to restrict their activities to the space inside their lodge or under the ice. This is why it is so important for beavers to store enough food to last them the entire winter.

Beavers live in family units called colonies, which often consist of breeding adults and the young from the spring of the year and sometimes from the previous year. Beavers are typically monogamous, although some males will occasionally mate with several females in the colony.

They only breed once per year, in January or February, usually while they are still in the lodge for the winter. Gestation is only 15 weeks long and the babies, which are called kits, are born in May or June. The kits stay in the lodge for several weeks before taking to the water for their first swim.

Beavers are well known for building lodges, which they use as year-round homes. You can tell the difference between a beaver lodge and a Muskrat lodge by looking at the type of building material used. Beavers construct with woody branches and twigs, while muskrats build with herbaceous (green) plants such as cattails and bulrush. Also, beaver lodges are often twice the size of muskrat homes.

The top food choices for beavers are willow, aspen, cottonwood, alders, and birches. It is important to note that they don’t “eat” the wood. They carefully chew off the soft inner and outer bark of the smaller branches and twigs. They also eat the leaf buds. This is why they chew down trees to be able to reach these tender branches without climbing the tree.

They have lips that meet behind the front incisor teeth, allowing them to carry branches and twigs in their mouths without getting their mouths full of water. Beavers normally spend about 1 to 2 minutes underwater but can stay for as long as 15 minutes.

On land, beavers are not very smooth. They are slow and waddle clumsily. But underwater they are fast and agile. Whenever danger is near, beavers head directly to water. Both male and female beavers will slap their tail on the surface of the water to warn of danger but studies show that males tend to do it more often than females.

Tail slapping is a form of communication between colony members. It us used to convey danger or aggression. Upon hearing a tail slap, the members of the colony will head for the safety of deep water. Males will often swim towards the danger, such as a predator, just to slap their tails several times more. Perhaps the beaver knows it can out-swim just about any predator and feels comfortable sounding multiple alarms. They also slap their tail at things they can’t figure out just to see if they can elicit a response.

I enjoyed sitting there on a wonderful winter day, just observing. Over the next couple of hours the beaver sat on the edge of the ice and chewed the bark off several twigs before slipping back into the water and returning with another tasty twig. Each time the beaver exited the water, he would spend several minutes grooming his coat. Only after the grooming session was complete would the eating commence. What a joy to watch.

In the steep mountain valley the sun goes down fast in winter and the light for photography goes with it. So I wrapped up my time with the beaver and called it a day.