The Miracle of Hibernation 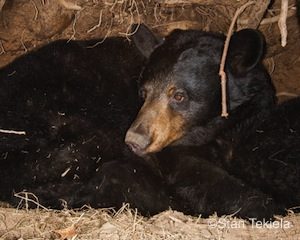 Black and Brown Bears are perhaps best known for the fact that they hibernate in winter. Hibernation is not a response to changing weather, extreme cold, or lots of snow, as many people believe—it’s a reaction to reduced food supplies. Thus, bears in captivity, which are fed regularly, do not hibernate. Similarly, many bears in the wild won’t hibernate when food is abundant during mild winters without snow.

Hibernation in bears is a state of inactivity with a high degree of dormancy. Metabolic rates, heart rate, breathing, and body temperature are greatly reduced at this time but still functioning. During summer, Polar Bears go into walking hibernation, a state in which their metabolic rate is reduced, but they are still active. Grizzly Bear hibernation is different from the deep sleep hibernation experienced by groundhogs, chipmunks, and other similar animals. It usually takes these critters several weeks to attain their extremely low metabolic rates.

It doesn’t take bears long to achieve their near dormancy, but they are light sleepers, waking often and moving around the den, sometimes several times a day. Occasionally during a very warm spell, bears will leave their dens and mill about for a day or more before returning. They may also switch dens in midwinter. When the weather warms, bears need to be awake enough to rescue their cubs and escape the incoming water that often floods the dens in springtime. The kidneys and other digestive organs slow during hibernation, and metabolism decreases as much as 75 percent. Heart rate dwindles to only 8–12 beats per minute. Respiration also drops dramatically, to about two breaths per minute. During one winter, I spent some time in a den with a hibernating mother bear. It was easy to count her breaths per minute because the exhalations were audible and steam condensing from her breath was visible in the cold air. 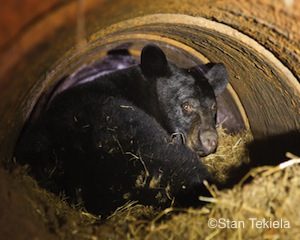 Body temperature also drops a significant 5–10 degrees, falling to a range of 87–93º F. Interestingly, the core temperature of mother Polar Bears during denning is reduced by only one degree, presumably because of the arctic habitat around them. If the body temperature of these bears were to dip much lower, they would risk freezing.

The most incredible aspect of hibernation in Black and Brown Bears is that they do not eat, drink, urinate, or defecate for up to 6 months. The digestive function stops, and bowel movements stop. Bears occasionally groom themselves and their cubs during winter, resulting in fecal plugs of hair and the slough of foot pads. By springtime, this fecal matter, which is very dry and can be as long as 5–7 inches, is expelled as the bear’s first bowel movement.

Under normal conditions, a buildup of urine could poison a bear. Urea, the chief component of urine, is a waste product formed when proteins are broken down during digestion. The cycle of proteins becoming urea is interrupted during hibernation, and urea production is reduced. The small amounts of urea that are created are broken down by the bear’s system, preventing the buildup of deadly toxins. This biochemical part of hibernation starts several weeks before the bear actually enters its hibernating den. 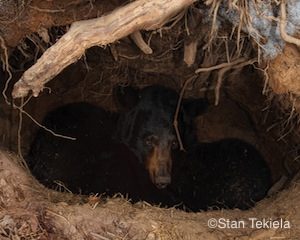 During hibernation, bears have higher levels of fat in their blood than usual and a total cholesterol level that is more than twice as high as the normal level in humans, yet they show no signs of hardening of the arteries or gallstones. If scientists were able to unlock these mysteries, it could help many people who suffer from these maladies. More amazing is that even though bears are inactive for many months, they don’t experience muscle atrophy. If we were to stay still for that long, our muscles would be so weakened that physical therapy would be necessary just to be able to walk again.

The length of hibernation depends on many factors, including climate, location, age and sex of the bear, reproductive status, and body fat. Bears in northern climates enter hibernation sooner and hibernate longer than southern bears. Northern bears also need more fat to survive their longer winters. In Arizona, southern California, and Florida, bears with a consistent food supply won’t hibernate at all.