In this week’s column, Stan Tekiela shares with us about the Horned Lark, an interesting American bird. 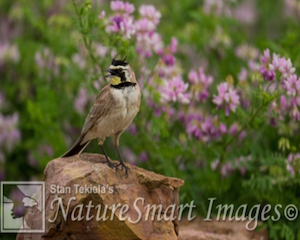 One particularly unique bird is the Horned Lark (Eremophila alpestris). Several dozen lark species occur in the world, but only one calls America its native home.

This small songbird is found throughout the U.S., in every state in the nation. It is also found from sea level to over 13,000 feet elevation. However, it has regional variations: The larks in California and the Pacific Northwest look very different from those found in the Midwest and East. Even though it’s widespread, I don’t believe many people notice this bird. It seems to be one of those species that everyone has heard about but hardly anyone sees or can identify.

The Horned Lark is found in fields, open areas with short grass, and agricultural areas. It is also found along roadsides or just about in any open place without trees. It is one of the few species of birds that will fly close to the ground over long distances. It is also a ground nesting bird. 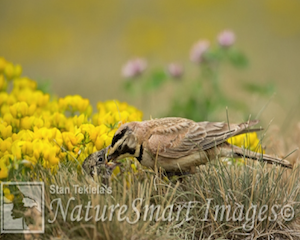 Like most ground nesting birds, the overall population of the Horned Lark is down significantly and continues to decline. The lack of nesting habitat and the mowing of roadsides, ditches, and fields for hay during the bird’s nesting cycle significantly contributes to the overall decline.

I am fascinated with ground nesting prairie birds such as the Horned Lark. I like the way I feel when I am standing in wide open spaces like native prairies. I enjoy the never-ending sky stretching above me and the constant wind in my face. I get the feeling of freedom when I am in a large prairie. So, recently, I’ve been spending a lot of time studying this bird and photographing its behaviors in the prairie.

The mating rituals of this bird are amazing. When the female is ready, she will display to the male by fluttering her wings on an open patch of dirt. The male responds by flying upwards of 800 feet high and circling around while singing the most wonderful musical song that sounds like tinkling bells. The male then folds his wings, dropping like a rock from the sky. He lands near the female and struts before her with his two tufts of feathered “horns” on his head upright and his wings drooped to the ground.

The female builds her own nest without aid from the male, usually on open ground at the base of a rock or a clump of grass. Interestingly, she will take upwards of two days to dig out a slight depression to construct her nest within. Sometimes she will gather small pebbles or dirt to use a door step or ramp up to the rim of the nest. She lays several heavily spotted and streaked eggs. 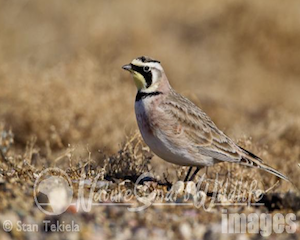 Females will give a broken wing distraction display very similar to the Killdeer if a predator approaches the nest site. Females can nest at least twice during the summer and in some regions three times. By the end of summer, large flocks of Horned Larks will form of both adult and juvenile birds and will move South together. They will spend the winter in large foraging flocks, going from one open area to another, looking for seeds to eat.

Recently, I have been able to study the nesting behavior and also capture some images of this unique prairie bird, all while enjoying the openness of our vast prairies. Until next time…