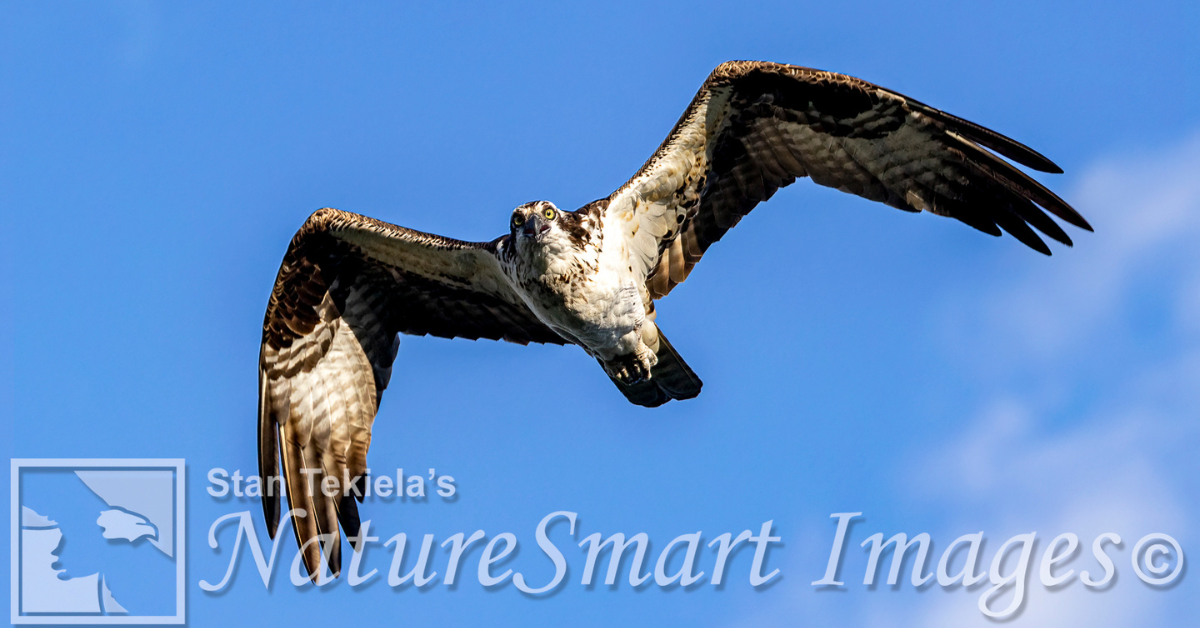 It’s Fall, and Ospreys Young and Adult Are About to Migrate 

Did you know that, at 4 months old, young Ospreys still call out for their parents to bring them food, even though the little ones can already fly at that age? Stan Tekiela tells us how Ospreys raise their young.

Sitting at the edge of the nest, the young Osprey was crying out in a begging call, wanting to be fed. His high-pitched screams echoed across the lake and, unfortunately, went unanswered. His parents were not around. He was all alone; worse yet, he was hungry.

In June this year, a pair of adult Ospreys nested on my property and produced one offspring. Usually, Ospreys have two or three young, but for some reason, this was the second year in a row these adult raptors had only one chick.

The number of eggs a female bird produces is based on many factors. It might be her age, her diet, or her overall health. Either way, only one chick was hatched. This single chick was doted on by its parents and fed and protected for several months over the summer. All the baby needed to do was sit in the nest and wait for his parents, mostly the father, to bring him some fish.

The Osprey (Pandion haliaetus), also known as the Fish Hawk or Sea Eagle, is not of the hawk or eagle species. Not closely related to any of our other raptors, the Osprey is in a family all its own. Ospreys are different from other daytime raptors in that they have toes of equal length. In addition, each nail or talon is rounded rather than grooved like other raptors. Their outer toe is also reversible and can point forward or backward, allowing them to grasp fish with two toes on one side and two on the other, thus ensuring they hold tightly onto a slippery fish. These are some of the significant differences between the Osprey and other raptors.

The name “Osprey” doesn’t have clear origins. The word was first used around the 1460s and was derived from a combination of Anglo-French and Latin to describe a bird of prey. Others say that it comes from the Latin ossifraga and translates to “bone breaker,” which was meant to apply to the Lammergeier (Bearded Vulture), a giant vulture that drops bones from the air to break them up on rocks to gain access to the marrow inside.

About 100 years later, the name was mistakenly applied to Ospreys, a bird that doesn’t break bones and feeds exclusively on fish. Since then, the name has stuck.

Ospreys are found in temperate and tropical regions worldwide, except for Antarctica. It is the second most widely distributed raptor species after the Peregrine Falcon. That is saying a lot because most birds are regional in nature.

Back at my nest, the young bird still calls out to be fed and occasionally takes short flights around the lake. Even though this young bird is only 4 months old, it looks and flies like an adult. Technically, it should be able to hunt on its own, but like most youngsters, it wants its parents to feed it.

The problem is that the adult female left to migrate south a week ago, and the adult male is still around but not paying much attention to the young bird. The adult male will also leave in the next week and start migrating south. The adults migrate individually and go to their wintering grounds. They don’t fly in flocks or roost together, and the mated pair won’t see each other until they return to the nest site next spring.

So this will leave the young Osprey on its own in a world he knows very little about. I find this fantastic behavior. It is not as uncommon as you might think. The baby loons on my lake are the same way. The adults are packing up and leaving or have left already, and the baby loon doesn’t even know how to fly yet. At least the Osprey can fly on its own.

Over the next couple of weeks, I will watch as the young Osprey reduces the number of begging calls for food and goes out hunting for its own meals. It will plunge feet-first into the lake, grabbing any fish it can. It will go back to the nest to feed and for some comfort in a familiar place. But once the leaves fall from the trees and the wind begins to blow cold, the young Osprey will have to start on a journey it has never been on before. It will have to navigate several thousand miles over three to four weeks and arrive in a place it has never been before to spend the winter. It will spend the next 18 or more months in this wintering range before returning, as a 3-year-old bird, to the lake where it was hatched.

My lake will freeze solid and be blanketed with snow, and I won’t see the Osprey family until next spring when the lakes thaw. Usually, within a few days of the lake opening up, the Ospreys will return to the nest and start the process all over again, and I will be here waiting and wondering how they spent their winter and if the young Osprey made it through.