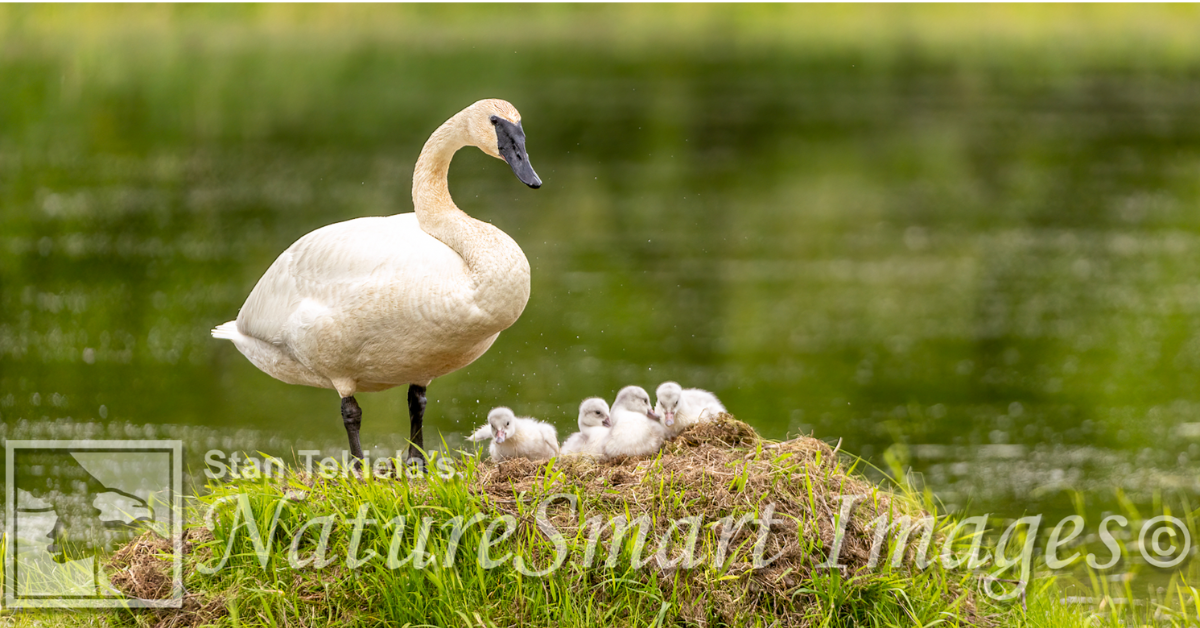 Trumpeter Swans—Back From the Brink of Extinction

This Trumpeter Swan family was not in a wilderness setting but in a suburban backyard pond. Wow, have things changed. First, when I started my career in wildlife photography 40 years ago, there weren’t any swans to be photographed, let alone in a suburban backyard. They were extirpated, which is a term that means they were locally extinct. Like so many species, we humans did a great job at killing them off.

Trumpeter Swans were hunted for their meat and for their beautiful white feathers. It’s estimated that a single swan has around 25,000 feathers covering its body; many of these are tiny down feathers that have great insulation qualities. They are large birds, standing nearly 4 feet tall, and have an impressive wing span of 6 to 8 feet. They are the largest waterfowl species and the heaviest native bird in North America. Adults can weigh up to 20 or 30 pounds.

They were heavily hunted and killed off in much of the United States by the year 1900. The same thing once happened to so many other species, such as the Eastern Turkey and the Whooping Crane. Many more suffered the same fate but for different reasons. Loons, Bald Eagles, Osprey, and others were also nearly wiped out due to chemicals (DDT) in the environment, along with massive habitat loss.

However, with the birth of the environmental movement in the 1970s, things started to turn around. Many federal laws were passed to protect these birds and other animals. At the same time, reintroduction programs were launched. Many of these species have responded very quickly, and we are now seeing the benefits of this combination of laws and work.

To restore the Trumpeter Swan, eggs were taken from a wild population that still existed in Alaska and northern Canada. These eggs were hatched, and the chicks were raised to adulthood. These adults then acted as the “seed” stock for future swans to be released. Slowly over the years, swans were released back into the wild. All these introduced birds had large neck collars with identification numbers. They found each other and started to nest and reproduce, providing the new wild population that we see today.

These days the Trumpeter Swans are common in many parts of the country. The other day, I was photographing a pair of swans with their cygnets when a family with two young children and a dog were walking by and stopped to see what I was doing. Even though the pair of swans and six cygnets were about 100 feet away—with my camera pointing right at the birds—they didn’t see what I was photographing until I told them.

I am no longer stunned by the lack of some people’s observation skills, but what really amazes me is that the family was unaware that these birds were once extinct in this region and needed to be reintroduced. The occurrence of the swans nesting in this park is fairly noteworthy. However, the response I got from the family was they had thought that the swans had always been there.

I guess, on the one hand, it’s good that people think that swans are “normal.” But on the other hand, if we don’t understand our past or at least have some knowledge of history, it’s going to be a problem. You know what they say about history: If you don’t know or understand your history, you are doomed to repeat it. Let’s hope not.