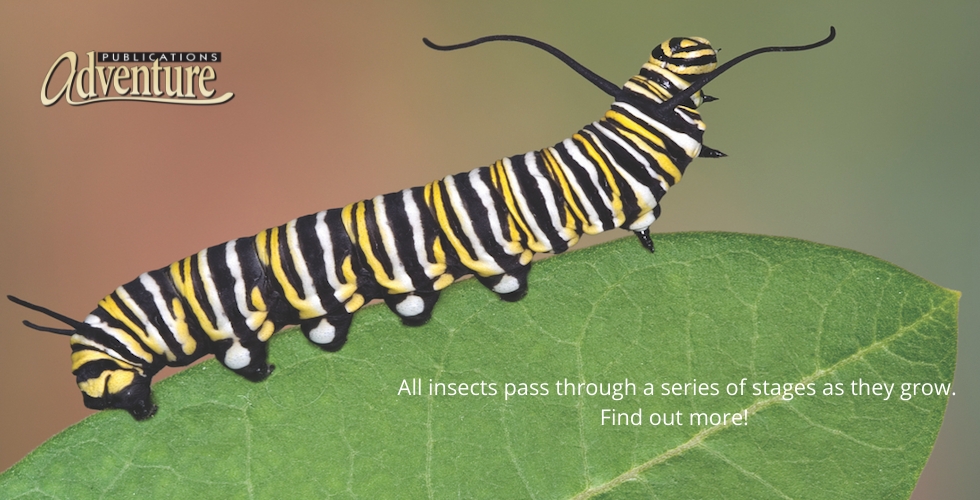 Insects are by far the most familiar and frequently encountered arthropods. Did you know that all bugs are arthropods? Arthropods are invertebrates—they don’t have an internal skeleton and bones. Instead, they have an external skeleton, a segmented body, and jointed appendages, such as legs and antennae.

Insects are also incredibly diverse, with over 1 million known species. The vast majority of species on Earth that are yet to be described are likely insects and other arthropods. In fact, scientists conservatively estimate that the total number of insects could exceed 8 million when all are eventually discovered. While the vast majority of that amazing diversity exists in the tropics, there are well over 150,000 species of insects in the United States and Canada alone. They are also incredibly abundant. Although it may sound crazy, there are about 1.5 billion insects on Earth for every human being.

All insects pass through a series of stages as they grow. This transition is known as metamorphosis. Many insects, such as butterflies, moths, flies, beetles, bees, and wasps, undergo complete metamorphosis, consisting of four developmental stages: egg, larva, pupa, and adult. The immature stages look very different than the adults, eat entirely different foods, and often live in separate environments.

A good example of this is the life cycle of a butterfly. Caterpillars are worm-like in appearance; have hard, chewing mandibles (jaws) perfect for eating plants; can only crawl; and are typically found on plants.

In comparison, adult butterflies have two large compound eyes, two antennae, and four large wings. They can fly and easily move from one location to another, as well as feed on liquid flower nectar with a long, tubular mouthpart, called a proboscis.

This developmental process has three stages: egg, nymph, and adult. The nymphs often closely resemble the adults in appearance, although they are smaller in size.

They also typically share the same food resources and environment that adults do, and they often behave similarly. True bugs are a good example. The nymphs look like smaller versions of the adults.

They have the same piercing-sucking mouthparts, feed on liquid food such as plant sap, live primarily on plants, and typically move by walking. The adults are somewhat larger, can reproduce, and have wings that enable flight.

About the author: Jaret C. Daniels, Ph.D., is an Associate Professor of Entomology at the University of Florida and Director of the McGuire Center for Lepidoptera and Biodiversity at the Florida Museum of Natural History, specializing in insect ecology and conservation. He has authored numerous scientific papers, popular articles, and books on wildlife conservation, insects, and butterflies, including butterfly field guides for Florida, Georgia, the Carolinas, Ohio, and Michigan. He is also the author of Vibrant Butterflies: Our Favorite Visitors to Flowers and Gardens; Backyard Bugs: An Identification Guide to Common Insects, Spiders, and More; and Our Love of Bees. Jaret currently lives in Gainesville, Florida, with his wife, Stephanie.

Get Insects & Bugs for Kids by Jaret C. Daniels and start a new and rewarding family activity! For more stories about wildlife and nature, sign up for our newsletter now!