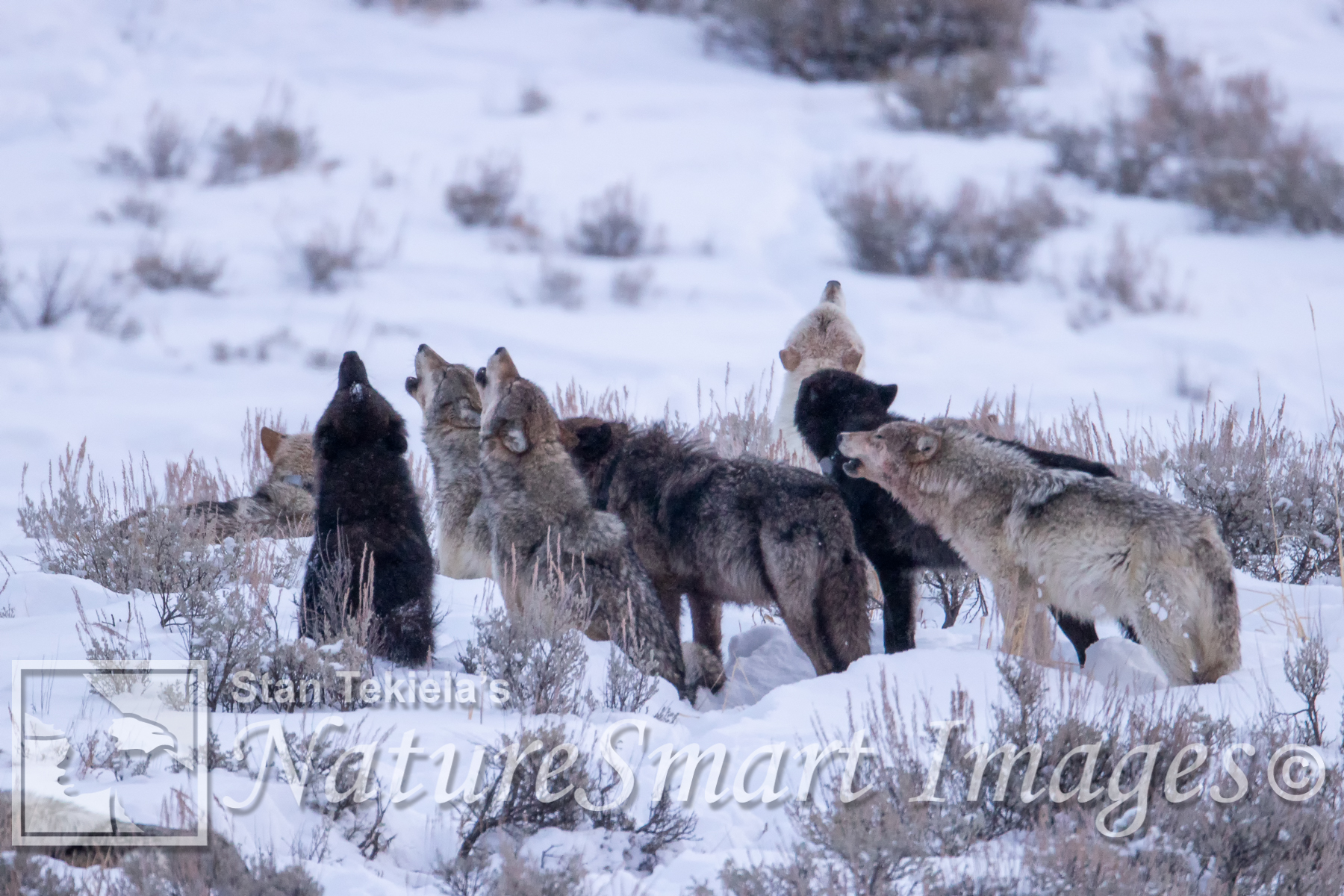 Wildlife photographer and naturalist Stan Tekiela reports on a gathering of wolves in Yellowstone National Park. Here is his story.

There is no question about it! It is a dog-eat-dog world out there, and now I have proof. On a recent trip to film wolves in Yellowstone National Park, I was reminded of this old saying. The week before I arrived, an associate of mine witnessed a coyote chasing a red fox through the deep snow. On the surface of things, it is perfectly normal for a coyote to chase a fox out of its area, but this time, when the coyote eventually caught up to the fox, it killed it and, shocker of shockers, the coyote then ate the fox.

My friend showed me pictures of the coyote attacking, killing, and carrying off parts of the fox. We talked about how unusual this was and how after 40 years of wildlife filming, we can still be surprised by the things we witness.

For the eight days I planned to film, I wanted to concentrate my efforts on capturing images of my favorite group of wolves, the Wapati pack. The alpha female of the Wapati pack is pure white with a small dark mark at the base of her tail. Her mother was the pure white alpha female of the Canyon pack, which I spent a lot of time filming about 10 years ago. Sadly, she is no longer alive.

Each morning I would head off into the cold and dark, with the air temperatures approaching -30 degrees Fahrenheit, but thankfully the wind was calm, so it made working in the extreme cold doable. My camera equipment, especially the batteries, didn’t like the bone-breaking cold, and touching the metal parts of my cameras with bare skin was always a problem. But, in the end, everything worked out.

Most of my time was spent watching the wolves at great distances. Often the pack was over a mile away and across a raging river, making it impossible to get close enough to capture any images or video. But one morning, I arrived in the dark and was getting set up to hike with all my camera gear. The first thing I do is listen for the wolves to help locate them in the dark. They often howl, either one lone wolf or the entire pack in the dark early in the morning. However, this morning was very quiet, and I thought the wolves were nowhere to be found.

I was hiking up a hill with just barely enough light to see when suddenly, there they were, the entire pack, or at least most of them. I didn’t have time to count them all, but most of them were gathered around a spot and it appeared they were eating or, more specifically, they were done eating and just playing with the leftovers.

To my delight, seven or eight of the wolves gathered in a tight group and started to howl. I was only about 130 yards away, so the volume of the howl was enough to make the hairs on the back of my neck stand up. They howled for several minutes, allowing me enough time to capture some images. Because the light was very low, I had to make some quick adjustments to my camera settings so I could capture a sharp image.

After the group howl, the white alpha female wolf, started to walk off and down the hill. One by one, the entire pack follow her. Eventually they all gathered on a distant ridge line under some large trees and once again began to howl. I was able to capture a few more images of the group again and roll some video.

It was only at this time that I lifted my eye from the view finder of my camera to survey the area. There was more light now, making it easier to see. It was at this time that I noticed a large patch of blood-stained snow. Upon further investigation, I could see by the tracks in the snow that the wolves had chased down a coyote and killed it right there.

More than likely the coyote carcass was carried to the spot where I had first seen the wolves and the spot where they were howling. Then, much to my surprise, a lone wolf, who apparently didn’t follow the group and was hidden behind a sage bush, got up and was carrying a large part of the dispatched coyote; he trotted down the hill to catch up to the pack. So, in just over one week, a coyote killed and ate a fox, and now the wolves killed and ate a coyote. Proof positive that it is most certainly a dog-eat-dog world.