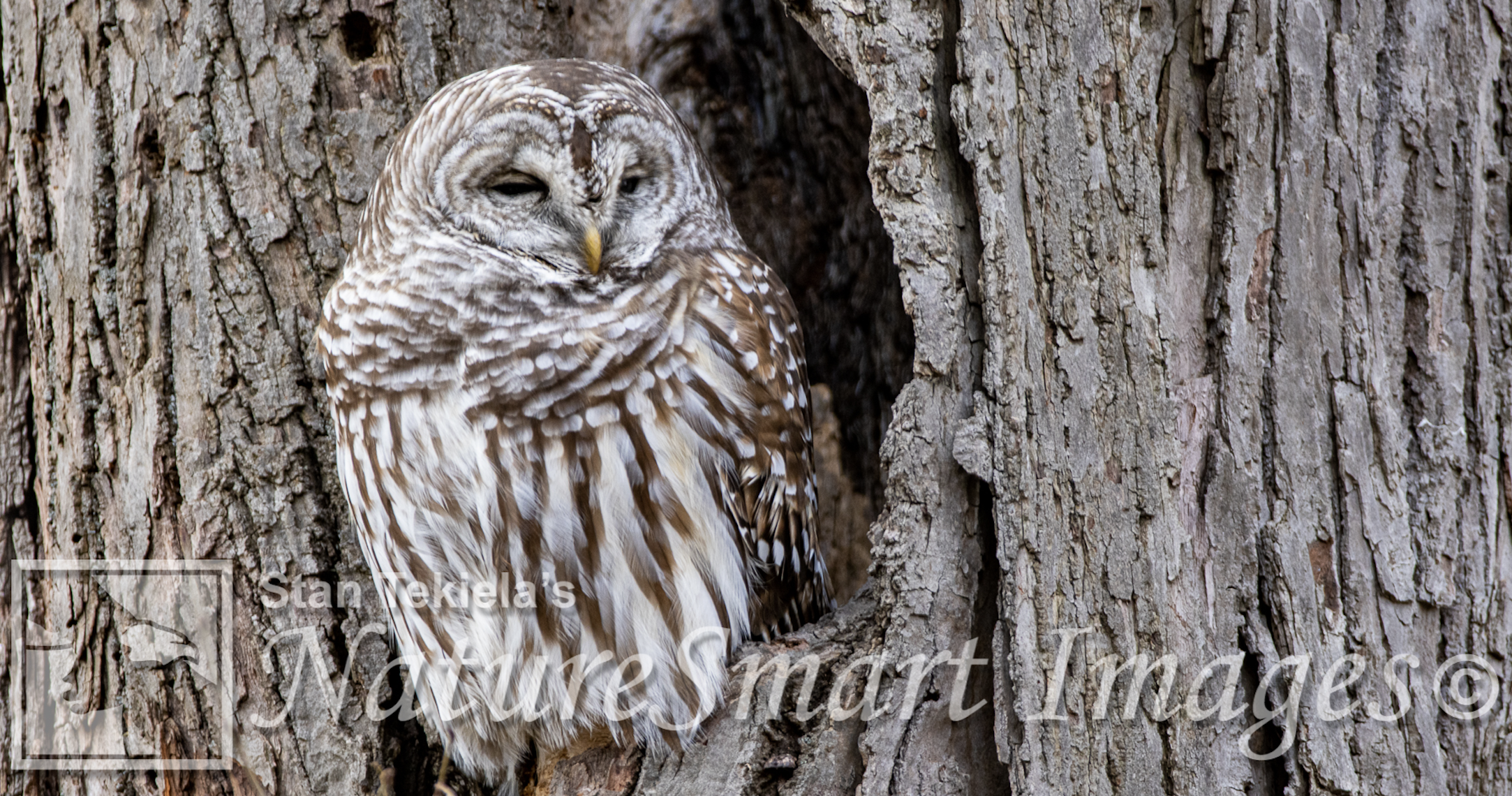 Winter is a Time of Plenty for Owls. Find out Why

In today’s post wildlife photographer and naturalist Stan Tekiela reports on why winter is a time of plenty for owls.

The nights are very long, and the days are painfully short. I was reminded of this the other day while out photographing and filming a wild Barred Owl sleeping in a tree. I spent several hours just observing this magnificent raptor as it dozed in a large maple tree in the middle of the day. The owl didn’t seem to be bothered by any of the many distractions happening all around such as squirrels fighting, a deer walking or an eagle flying overhead.

Owls are perfectly adapted to not only survive in winter but to thrive in winter. Most owls are nocturnal which means they hunt at night. And during the winter the nights are extra long allowing more opportunities to hunt.

Owls differ from all other North American birds in so many ways. To start, owls have large round heads. In fact, their heads are generally the same width or thickness of their body, so it appears they don’t have any shoulders. Other birds have noticeably smaller heads with well-defined shoulders. The larger head makes room for a larger brain so you might assume owls are smarter than other birds. Not so fast, studies of bird intelligence show that owls are only in the middle of the road when it comes to brain power. So much for the idea of owls being wise.

However, their large heads facilitate other important attributes. An owl’s eyes are much larger than other birds of comparable size. In fact, their large eyes make up about 3 to 5 percent of their total body weight. By comparison, your eyes weigh just a tiny fraction of your body weight.

Owl eyes are not round balls like yours and mine. An owl’s eyes are tubular, which allow them to act like a telephoto lens. The greater the distance from the lens at the front of the eye and the photo receptors at the back of the eye, the more magnification of the image. And just like a telephoto lens, the longer the lens, or in this case the eye of an owl, the greater the distance they can see.

Like other birds, owls have two sets of eyelids. The first or inner most of these lids are called the nictitating membrane. And just like the name implies it looks like a thin membrane or skin. In owls the membrane is milky in color and helps to clean and protect the eye. Unlike other birds, the owl’s outer eyelid drops down from the top to the bottom of the eye. In other groups of birds, the outer eyelid closes from the bottom up.

The face of an owl is covered in short specialized feathers that form a circle or ring that funnels sound down to the bird’s ear openings. The ear openings are unlike yours and mine, in some species of owl their ear openings are not the same size or located directly across from each other. These asymmetrical ear openings help the bird pinpoint sounds with incredible accuracy even in complete darkness. This is something other birds can’t do.

Everyone knows that owls have super sensitive hearing and can find prey in the dark. But have you ever wondered how an owl turns off this superpower hearing ability during the day when they are trying to sleep?  I was thinking about this very thing while filming this Barred Owl.

The answer to the owl getting some much-needed rest is a small flap of skin called an operculum, that slides over to cover the ear openings when they are sleeping during the day. It is like having built in earmuffs which cuts off incoming sounds.

All though owls are not the smartest bird in the tree, they are especially well adapted to life in the cold and snow.

If you enjoyed Stan’s post about why winter is a time of plenty for owls, you may consider his amazing nature books: Majestic Eagles, Wild Birds, or Backyard Birds: Welcomed Guests at our Gardens and Feeders.